What is El Niño?

In normal years, easterlies blow clear across the equatorial Pacific transporting sea surface water westward. Off the west coast of South America, an upwelling of deep ocean waters occurs to replace surface waters being transported westward away from the continent. The cold upwelling currents keep sea surface temperatures cool in the eastern Pacific. The air above stays too cool and dense to rise high enough to form rain clouds, so cool, dry conditions typical of high pressure systems prevail. The monsoon rains are confined to the western Pacific where sea surface and air temperatures are warm, and a low pressure system is maintained.

When winds shift during an El Niño event, water is no longer being transported away from the west coast of South America. Upwelling slows or stops, allowing sea surface and air temperatures to rise in the eastern Pacific. Atmospheric pressure becomes anomalously low in this region. The air becomes buoyant enough to rise and form large rain clouds, and the monsoon rain zone migrates east, usually ending up in the central Pacific. This migration directly affects rainfall in the region, bringing drought to the western Pacific, and flood to the east; but the significant shift in tall, massive rain clouds can also disrupt upper atmospheric circulation. Dense, tropical rain clouds distort the air flow aloft, producing waves thousands of miles long in the horizontal direction. These waves determine the positions of monsoons and jet streams. The shifting position of the tropical rain clouds during El Niño affects these waves, distorting jet streams and rain belts and bringing drought, flood and unseasonable weather to far reaches of the planet.

The effects El Niño has on global climate are quite widespread and concern every citizen of Earth. The Microwave Limb Sounder (MLS) instrument on the UARS satellite has, in the past, been making El Niño related measurements. The MLS instrument that will be present on EOS Aura 1 is an updated version of the UARS instrument.

Due to the age of UARS the spacecraft is presently unable to make complete El Niño measurements in a year that appears will have a strong El Niño event. Continuous measurement of global El Niño effects will be a vital role the Aura platform will play in future years. In addition, due to the differences in the Aura orbit, Aura will be able to provide pole-to-pole coverage every day, whereas UARS data has monthly gaps which caused the loss of data during critical periods. 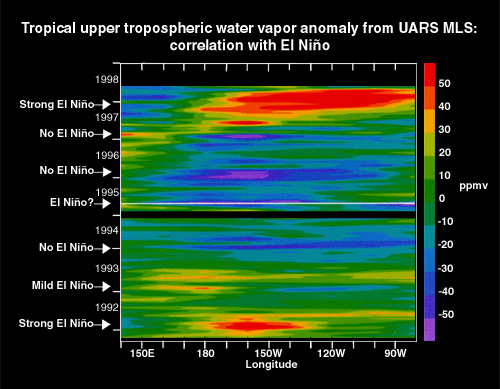 Back to the Microwave Limb Sounder