Stratospheric ozone has decreased 3% globally between 1980 and 2000 and thins by 50% over Antarctica in winter and spring. Depletion of the ozone layer allows more ultraviolet radiation to reach the surface. Increases in UV radiation are known to have harmful effects on living things. The Montreal Protocol and its amendments have banned the use of ozone destroying chemicals and the rate of ozone depletion seems to have slowed. Climate change will have an impact on how quickly ozone recovers.

The Earth's Air Quality Is Fundamental To Public Health And Ecosystems

The atmosphere has no political boundries; air pollution moves great distances across oceans and continents. The quality of air has degrated over certain parts of the world and has become a health issue. Severe pollution episodes increase mortality.

The Earth's Climate Is Affected By Changes In Atmospheric Composition

It is undeniable that human activity is beginning to alter the climate. The global rise in surface temperatures since the 1950's is correlated with the increase in greenhouse gases. Changes in carbon dioxiode, methane, nitrous oxide, ozone, cloud cover, water vapor and aerosols all contribute to climate change.

Aura's four instruments study the atmosphere's chemistry and dynamics. Aura's measurements will enable us to investigate questions about ozone trends, air quality changes and their linkage to climate change.

Above : The Ozone Monitoring Instrument (OMI), measures the air pollutant nitrogen dioxide (NO2) from high above Earth's surface. NO2 is released into the air by burning coal, gasoline, and biofuels, such as wood. Maps show annual mean observations of NO2 in 2005 and 2010. Notice the large increase in NO2 in China because of its rapidly growing economy. At the same time, there was a large decrease in the United States by 2010 due to federal and state regulations of NOx (NOx = NO + NO2) emissions from power plants and cars. NOx emissions are regulated because it is unhealthy to breathe and reacts with other gases to produce ozone, which is also unhealthy to breathe. 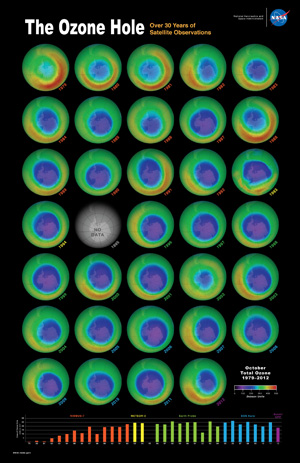 The Ozone Hole : Over 30 years of NASA Observations

Aura introduces its latest poster which illustrates data from five different missions that tracked the development of the ozone hole from space. 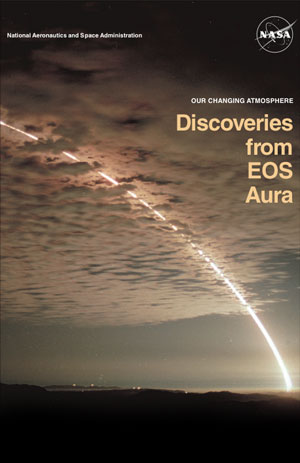 The latest brochure highlighting some of the discoveries from Aura!