Is air quality getting worse?

The lower level of our atmosphere, known as the troposphere, is also affected by human activity. Aura will make the first space-based observations of the troposphere to discover global patterns and trends that shape its health.

How is the Earth's climate changing?

Water vapor and ozone in the upper layers of our atmosphere are important factors in maintaining global temperature. Aura will study the levels and distribution of these key gases to better understand how they regulate climate.

Is the ozone layer changing as expected?

TOMS Observations from 1978 to the present show strong secular trends in decreasing ozone both at midlatitudes and at the polar regions, Although the Antarctic ozone hole growth has slowed, very significant ozone depletions have occurred in the Arctic . As a result of international agreements, tropospheric chlorofluorocarbons concentrations have begun to decrease.

Recovery of ozone is the primary science question for the instruments HIRDLS, MLS and OMI. The stratospheric measurements made by these instruments will permit a very complete assessment of the chemical processes controlling ozone. All three of the major radicals that destroy ozone (ClO, OH and NO) will be made by HIRDLS and MLS along with the main reservoir gases, HCl, ClONO2 and HNO3. In addition, the Aura instrument payload will make measurements of chlorine and nitrogen sources gases as well as long lived tracers of motion, N2O, H2O, and CH4. OMI continues the column and profile ozone trends from TOMS/SBUV with higher horizontal resolution.

What are the processes that control tropospheric pollutants?

Human activities have increased surface-level ozone concentrations and decades of research and regulations now reveal that a global approach is required to further understand the sources of ozone and other pollutant precursors. Tropospheric ozone production occurs when volatile organic compounds (VOCs) and nitrogen oxides (NO x ) are exposed to sunlight. Since the emissions of these ozone precursors are directly linked to today's urban and industrial lifestyle, reductions are both socially and economically costly. For this reason, policymakers have sought guidance from the scientific community in determining effective ways to meet health-based ozone standards or goals.

The response of ozone to changes in VOC and NOx emissions can be quite complex and variable. Moreover, winds can transport both ozone and its precursors over large distances; and, as a result, exposure to elevated ozone can arise from both local and distant sources. 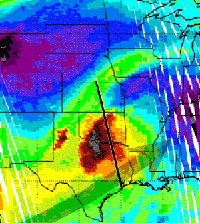 The Aura mission is designed to produce the first global assessment of tropospheric ozone, its precursors and controlling gases. The measurements from TES as well as measurements from OMI (NO2, ozone and aerosols) combined will provide important data on this process.

There are fundamental climate change questions related to moistening or drying of the upper troposphere as convective activity changes. For example, it is now understood that the IR cooling of the atmosphere is strongly influenced by upper tropospheric/ lower stratospheric water vapor, aerosols and ozone. On decadal time scales, signals from greenhouse gas changes and signals from the changes in reactive constituents are intertwined and difficult to untangle. The tropopause is a complex internal boundary within the atmosphere related to both radiative and dynamical mechanisms. Because the concentrations of many trace gases vary greatly across the tropopause, changes in the UT/LS impact not only the radiative attributes of the atmosphere, but also the chemical environment.

The location and intensity of both tropical and mid-latitude strat-trop exchange is key to our ability to quantify the properties of the UT/LS. One of the major science questions Aura measurements will be needed to solve is the mystery of increasing stratospheric water vapor. Stratospheric water vapor concentrations are increasing faster than can be accounted for by increases in methane. A number of hypothesis suggest that changes in the freeze-dry mechanism at the tropical tropopause are producing an increase in water transport into the stratosphere.

Untangling the complex free-dry mechanism of the tropical tropopause will be one of the goals of the Aura science team. Relative to the upper troposphere/ lower stratosphere dynamics and chemistry, Aura instruments will make key measurements of ozone, water vapor, ice particles and long lived trace gases that will give lead to a better understanding of the dynamics and chemistry of that region. Especially important to the measurements of the UT/LS is HIRDLS which was designed to make high horizontal and vertical resolution scans of the atmospheric limb.