The Aura spacecraft was launched into a near polar, sun-synchronous orbit with a period of approximately 100 minutes. The spacecraft repeats its ground track every 16 days to provide atmospheric measurements over virtually every point on the Earth in a repeatable pattern, permitting assessment of atmospheric phenomena changes in the same geographic locations throughout the life of the mission.

The Aura spacecraft was designed for a six-year lifetime. The spacecraft orbits at 705 km in a sun-synchronous orbit (98o inclination) with a 1:45 PM ±15 minute equator crossing time. Aura limb instruments are all designed to observe roughly along the orbit plane. The Microwave Limb Sounder (MLS) instrument is on the front of the spacecraft (the forward velocity direction) while High Resolution Dynamics Limb Sounder (HIRDLS) , Ozone Monitoring Instrument (OMI) , and Tropospheric Emission Spectrometer (TES) instruments are mounted on the nadir side. 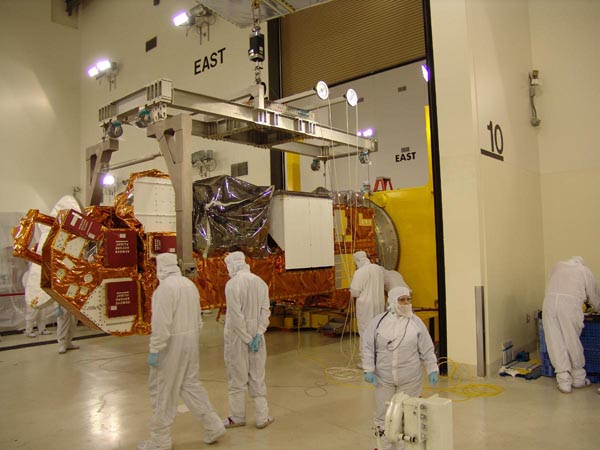 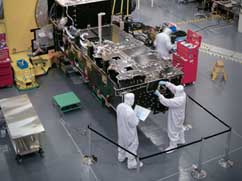 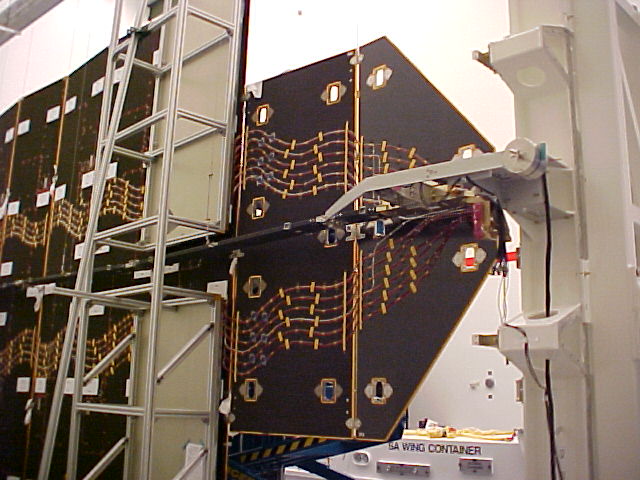 The spacecraft structure is a lightweight 'eggcrate' compartment construction made of graphite epoxy composite over honeycomb core, providing a strong but light base for the science instruments. The weight of the structure is approximately 700 kg., significantly lighter than a comparable aluminium structure, leaving more of the launcher weight-lift capability for science measurements.

A deployable flat-panel solar array with over 20,000 silicon solar cells provides 4600 watts of power in sunlight. While in sunlight, a portion of the solar array power, driven to always face the sun, charges a 24 cell nickel-hydrogen battery which powers the spacecraft and the instruments when the spacecraft is in night phase of the orbit.

The S-band communication subsystem also can communicate through NASA's TDRSS synchronous satellites in order to periodically track the spacecraft, calculate the orbit precisely, and issue commands to adjust the orbit to maintain it within defined limits.

Spacecraft attitude is maintained by stellar-inertial, and momentum wheel-based attitude controls with magnetic momentum unloading, through interaction with the magnetic field of the Earth that provide accurate pointing for the instruments. Typical pointing knowledge of the line of sight of the instruments to the Earth is on the order of one arc minute (about 0.02 degrees)

Electronic components are housed on panels internally, leaving the spacecraft 'deck' available for the four science instruments, and providing them a wide field of view. The side of the spacecraft away from the Sun is devoted to thermal radiators, which radiate excess heat to space and provide the proper thermal balance for the entire spacecraft.

A propulsion system of four small one-pound thrust hydrazine monopropellant rockets gives the spacecraft a capability to adjust its orbit periodically to compensate for the effects of atmospheric drag, so that the orbit can be precisely controlled to maintain altitude and the assigned ground track.

These figures illustrate the various systems and configurations of the spacecraft.

MLS will provide high vertical resolution profiles which are nearly simultaneous with the OMI observations, and which extend down to and below the tropopause. Thus it will be possible to combine observations from these three instruments with meteorological data to produce effective separation of the stratospheric component of the total column ozone and thus provide an estimate of the tropospheric ozone column (sometimes called the residual). The residual can be compared with TES tropospheric profiles of NO2 and O3. The combination of instruments will make it possible to understand the stratospheric and tropospheric contributions to O3 as well as the transport, physical and chemical processes which effect their distributions. 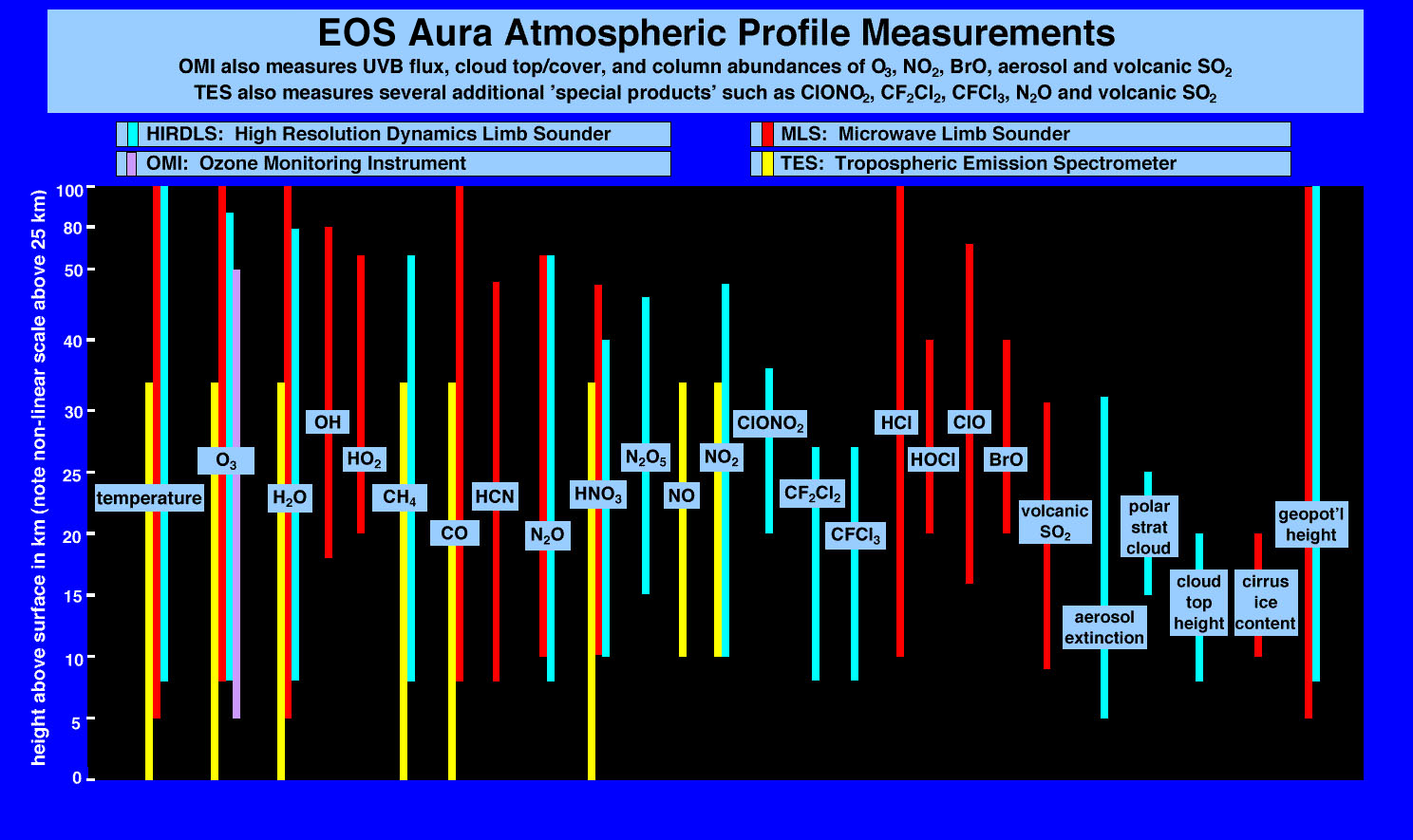 This table summarizes the atmospheric parameters measured by HIRDLS , MLS , OMI , and TES . The altitude range where these parameters are measured are shown as the vertical scale. In several cases the measurements overlap which provides independent perspectives and cross calibration of the measurements. [View Large]