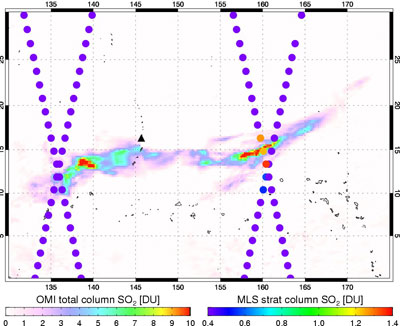 This image of volcanic eruptions from Anatahan (Mariana Islands) shows sulfur dioxide concentrations in the atmosphere on April 7, 2005, over 30 hours after the eruption. Sulfur dioxide (SO2) emissions from the eruption were measured by the Ozone Monitoring Instrument (OMI) , which detects the total column amount of SO2 between the sensor and the Earth's surface and maps this quantity as it orbits the planet.