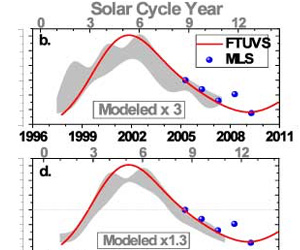 OH data from the Microwave Limb Sounder (MLS) on Aura and a ground-based FTUVS suggest a response of the OH column to the solar cycle that is significantly larger than model results using established solar forcing. 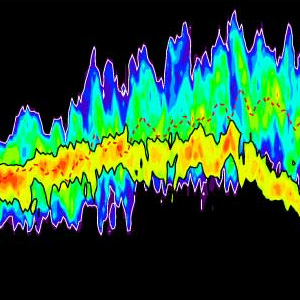 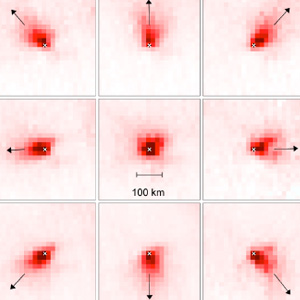 Emission inventories in megacities are uncertain, particularly in developing countries. Can we use OMI to better quantify these emissions without a model? 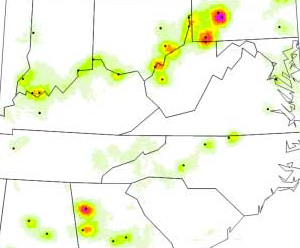 Decrease in SO2 over the Eastern US

OMI data confirm a substantial reduction in sulfur dioxide (SO2 ) values around the largest US coal power plants as a result of the implementation of pollution control measures. 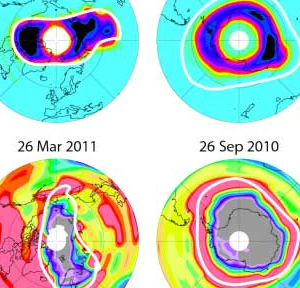 Unusually prolonged cold conditions in the spring 2011 Arctic stratosphere promoted levels of chlorine activation and chemical ozone loss never before observed in the Arctic, comparable to those in the Antarctic in some winters. 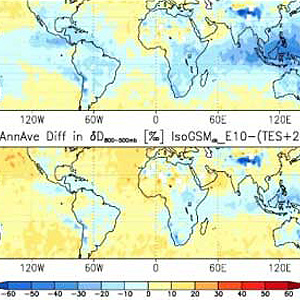 Differences between TES data and climate models are due to rainfall, evaporation and mixing processes.... 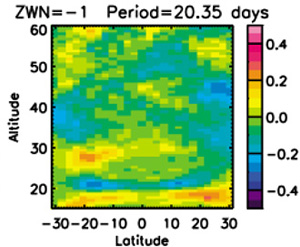 HIRDLS temperature measurement sampling and resolution afford unprecedented views of the latitude-height structure of equatorial waves at altitudes above the cloud tops. 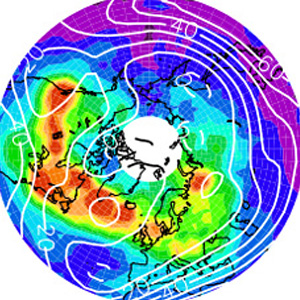 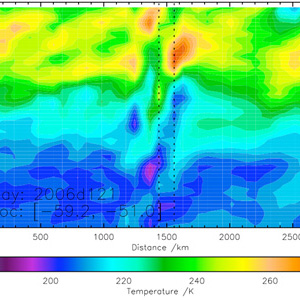 Measurements from HIRDLS are used to quantify gravity wave momentum fluxes generated from monsoon regions across the globe over the three years 2005-2007. 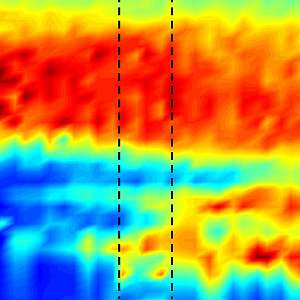 Deep intrusions of tropospheric air into the lower stratosphere above the subtropical jet, characterized by low ozone concentration and low static stability, are consistently observed with Aura/HIRDLS. 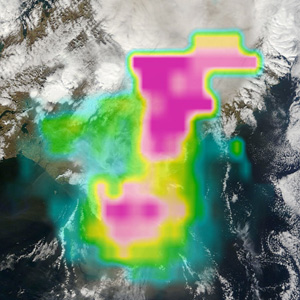 Aura's OMI ultraviolet aerosol index allows volcanic ash to be detected over clouds whereas this is more difficult with a visible image. 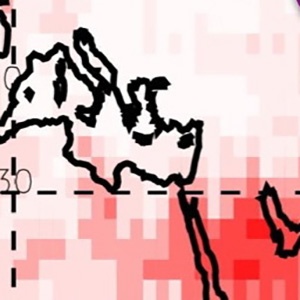 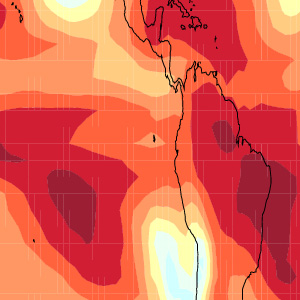 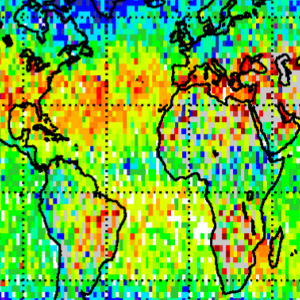 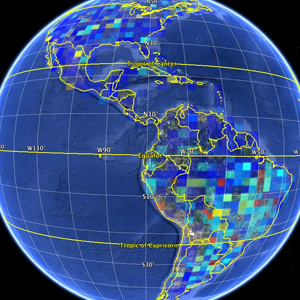 TES captures the variability of ammonia over the Earth's surface. 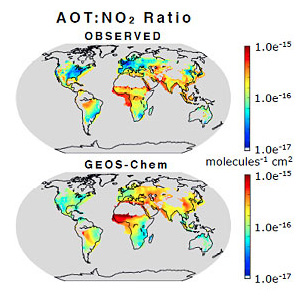 Information on the global composition of aerosol particles, their emission sources and relative regional pollution controls of combustion processes.

In the News : Aura Features

Ash from Puyehue-Cordón Caulle
06.18.2011 - This series of images tracks the volcanic ash from Chile to the eastern South Pacific Ocean, nearly completing a trip around the globe in eight days.

A Day of Night-Shining Clouds
01.28.2011 - Scientists have a good reason to track noctilucent or polar mesospheric clouds: they are a pretty good gauge of even the tiniest changes in the atmosphere. These "night-shining clouds" as they are sometimes called, are thin, wavy ice clouds that form at very high altitudes and reflect sunlight long after the Sun has dropped below the horizon.

Sharp Decline in Pollution from U.S. Coal Power Plants
12.01.2011 - A team of scientists have used the Ozone Monitoring Instrument (OMI) on NASA's Aura satellite to confirm major reductions in the levels of a key air pollutant generated by coal power plants in the eastern United States. The pollutant, sulfur dioxide, contributes to the formation of acid rain and can cause serious health problems.

Long Cold Spell Leads to Arctic Ozone Hole
10.06.2011 - In March 2011, the Earth Observatory published images of a rare, deep depletion in the ozone layer over the Arctic. The images came from daily observations made by Aura's OMI instrument.

Study of Unprecedented Arctic Ozone Loss
10.02.2011 - A NASA-led study has documented an unprecedented depletion of Earth's protective ozone layer above the Arctic last winter and spring caused by an unusually prolonged period of extremely low temperatures in the stratosphere.

Pollution 'Butterfly'
07.15.2011 - Fires raging in central Africa are generating a high amount of pollution that is showing up in data from NASA's Aura Satellite, with the ominous shape of a dark red butterfly in the skies over southern part of the Democratic Republic of the Congo and northern Angola.

Fire's Fading Pollution Plume in Northern Canada
07.15.2011 - In its early, violent days, the eruption at the Puyehue-Cordón Caulle volcanic complex sent clouds of ash high into the atmosphere.

Pollution from New Mexico, Arizona Fires
07.01.2011 - NASA's Aura Satellite has provided a view of nitrogen dioxide levels coming from the fires in New Mexico and Arizona.

Ash from Puyehue-Cordón Caulle
06.18.2011 - Recent pollution levels from the fires in Canada's Northwest Territories do not appear to be as high as they were at the end of June as the fires have come under more control since then.