Deep intrusions of tropospheric air into the lower stratosphere above the subtropical jet, characterized by low ozone concentration and low static stability, are consistently observed with Aura/HIRDLS. The intruding layer occurs along and under the poleward extending tropical tropopause, which becomes the secondary tropopause in middle to high latitudes. This HIRDLS observation of a multi-layer intrusion event over Europe in the spring of 2006 shows the spatial extent of the intruding air mass.

Comparisons between two ozonesondes for the day shown and multiple HIRDLS profiles adjacent to each, indicate that the vertical features are captured well in the HIRDLS measurements.

HIRDLS satellite measurements of ozone, as well as other trace species, aerosols and temperature have the highest existing vertical resolution available with daily global coverage. 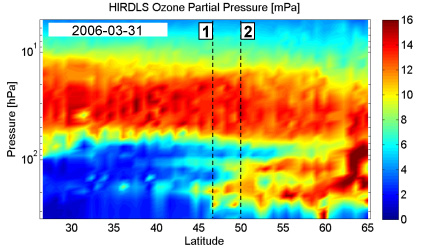