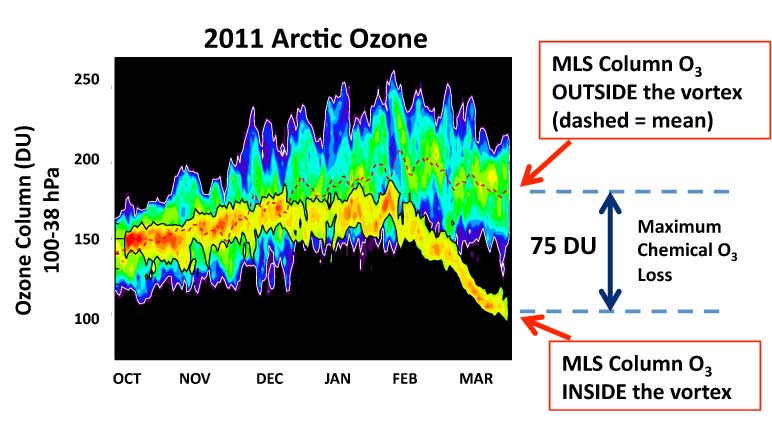 The difference between the means inside and outside the lower stratospheric vortex is an estimate of chemical ozone (O3) loss. Vortex chemical loss is at most 75 DU.

Weaker than usual transport to high latitudes leads to ozone stratospheric columns outside the vortex ~25 DU lower than 2005-2010 average. 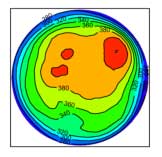 Why? The vortex has broken down, allowing high O3 to be transported to high latitudes. 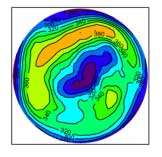 Seasonally, Arctic column O3 has a significant increase during fall and winter. Transport is responsible for the increase but polar stratospheric cloud (PSC)-driven loss in the lower stratosphere can diminish it. The polar vortex forms during fall, isolating part of the high latitude air mass from horizontal transport. Most years the vortex has broken down by late March, but in 2011 the vortex was strong and the usual seasonal transport of ozone-rich air to polar latitudes had not yet occurred. This is part of the reason for the low ozone columns observed in late March by MLS and OMI on Aura.

Low temperatures in the Arctic vortex in February and March caused PSC-catalyzed ozone loss. To estimate the chemical loss that occurred, we examine lower stratospheric (LS) ozone partial columns (100-38 hPa) inside the vortex because this is where the ozone loss occurs. By differencing the partial columns outside the LS vortex with those inside we get an upper limit on chemical ozone loss. By comparing the 2011 partial columns above and below the LS with those columns from previous years, we see that ozone was lower in 2011. These column abundances are controlled by transport, thus we can say that part of the cause of the low ozone columns at the end of March was weak transport.