Emission inventories in megacities are uncertain, particularly in developing countries. Can we use OMI to better quantify these emissions without a model?

By analyzing the downwind patterns of Nitrogen Dioxide (NO2) for different wind conditions, we simultaneously determine megacity Nitrogen Oxides (NOx) emissions and lifetimes from Aura's Ozone Monitoring Instrument (OMI). Estimated daytime lifetimes are ~4 hours at low and mid-latitudes, but ~8 hours in wintertime for Moscow. Derived NOx emissions are is reasonable agreement with global emission inventories, but are higher by a factor of 3 for the Saudi-Arabian capital Riyadh.


The wind dependency of NO2 column densities around Riyadh.

Left: Mean NO2 tropospheric columns in the Middle East from OMI measurements during 2005-2009 for calm (w<2 m/s) conditions with <30% cloud cover. The grey box indicates Riyadh and the surrounding area. 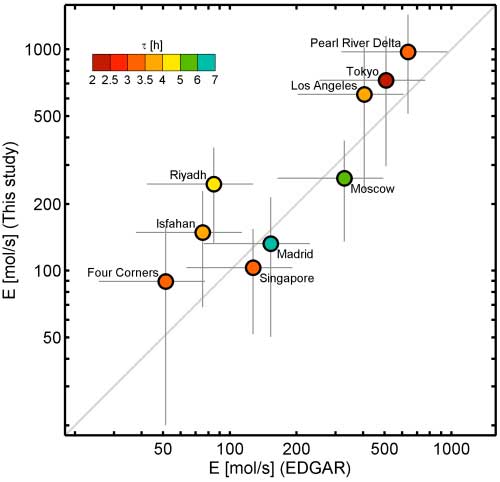