Water vapor is a gas that plays an important role in determining the temperature structure and chemistry of the troposphere and stratosphere (i.e. altitudes from ground level to 50 Km). Ice crystals (cirrus clouds) form in rising humid layers in the upper troposphere near 17 Km altitude, and fall back to Earth, producing a very dry stratosphere. Many of the cirrus clouds are very tenuous - in fact the human eye, looking upwards, cannot see the "subvisible cirrus".

Previous satellite experiments were able to map the time averaged location of the cirrus, but the recent observations by the HIRDLS and CALIPSO experiments provide more detailed observations of the subvisible cirrus. The HIRDLS experiment, which looks along horizontal paths that view the Earth's horizon from space, and the CALIPSO experiment, which uses lidar (laser technology) to view in a downwards direction, can now map the vertical, horizontal, and temporal variations in unprecedented detail.

This information will help to place quantitative constraints upon numerical models that describe the physics of cirrus formation, and improve the capability of these computer models to describe possible future changes in stratospheric and upper tropospheric water vapor. 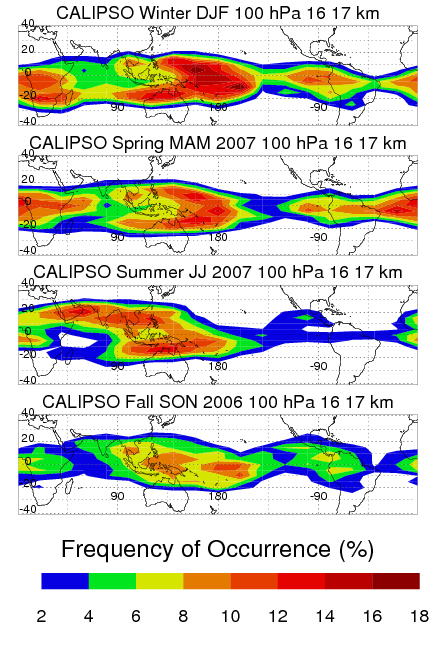 The figure here presents seasonal maps of "laminar cirrus", thin tenuous clouds that have a horizontal extent greater than 200 Km. These maps, corresponding to altitudes between 16 and 17 Km, reveal that there are more laminar clouds in winter than summer and less laminar cirrus over Indonesia than eastward of Indonesia.