Aura's Ozone Monitoring Instrument (OMI), with its wide swath, is the only instrument that can detect Bromine Monoxide (BrO) at the pole on every orbit. Here, stratospheric BrO has been carefully separated from the total column (using a chemical and dynamical model) to produce estimates of the tropospheric BrO column. Validation was accomplished with aircraft in situ measurements during the NASA ARCTAS field campaign, showing that bromine chemical activation takes place at the Arctic near the surface.

Why is BrO important in the Arctic? 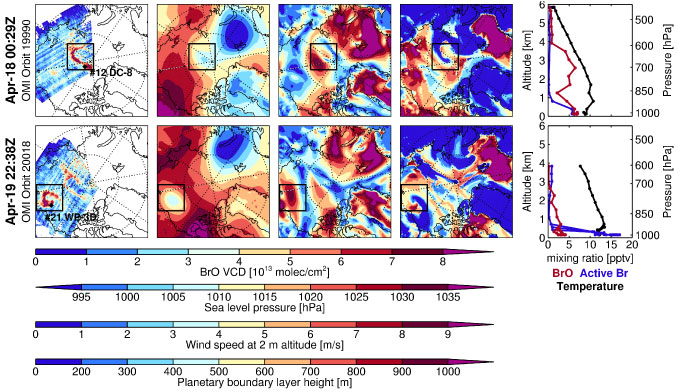 Scientific significance:
Before the ARCTAS and ARCPAC field campaigns, ground- and satellite-based data, primarily from remote sensing, indicated numerous areas with large enhancements of BrO, thought to be occurring near the surface where it is hypothesized that bromine is released from blowing snow. The enhancements were linked to events of severe ozone depletion also near the surface. One of the objectives of the ARCTAS campaign was to fly into these regions and analyze the chemical composition of the air. When the aircraft were guided into the BrO "hot-spot" areas using satellite data, researchers were very surprised to see neither BrO enhancements nor ozone depletions. Salawitch et al. (GRL, 2010) showed that much of the BrO seen by satellites in these hot spot areas, was in fact due to compressed BrO in the stratosphere. This study takes the next step in interpretation of data from the ARCTAS campaign.

This is the first study to quantitatively evaluate satellite-based estimates of tropospheric BrO in the Arctic with aircraft in situ measurements. This study showed for the first time a rapid activation of bromine chemistry at high temporal resolution, made possible by wide-swath OMI observations. Two flights crossed regions of high tropospheric BrO and both were validated by the aircraft sensors. The study therefore gives further weight to the hypothesis that there is a tropospheric source of bromine. By using high resolution meteorological from the NASA GMAO, the study shows that the source is related to high winds (blowing snow) associated with low pressure systems and/or a high planetary boundary layer where the catalytic bromine-ozone chemistry can be maintained. The study also emphasizes the importance of having an accurate estimate of the stratospheric contribution to the total BrO column. It also showed that tropospheric BrO can only be observed in the Arctic only under certain conditions (over bright surfaces - primarily ice), when thick clouds are not present, and not at very high solar zenith angles.