Solar eruptions in early 2005 led to a substantial barrage of charged particles on the Earth's polar atmosphere during the January 16-21 period. Most of these charged particles were protons, thus the term "Solar Proton Event (SPE)" has been used to describe this phenomenon. The solar protons created hydrogen- containing compounds, which led to the polar ozone destruction. We have used the Aura Microwave Limb Sounder (MLS) observations to quantify the changes in the hydroxyl radical (OH), hydrogen dioxide (HO2), and ozone due to these SPEs.

The atmospheric changes in OH, HO2, and ozone for the latitude band 60-82.5oN shown in Figure 1 are all relative to the quiet January 1-14, 2005 time period, which contained no SPEs. Fairly substantial OH enhancements (up to 4 ppbv) and HO2 enhancements (up to 0.8 ppbv) were caused by the SPEs. To the best of our knowledge, this is the first time that SPE-caused HO2 measured increases have been reported. The SPE-caused mesospheric ozone decreases (up to 80%, area outlined by the 'yellow' line) are confined to pressures <0.5 hPa. The ozone changes below these large decreases are mostly seasonal variations, not connected to the SPEs. 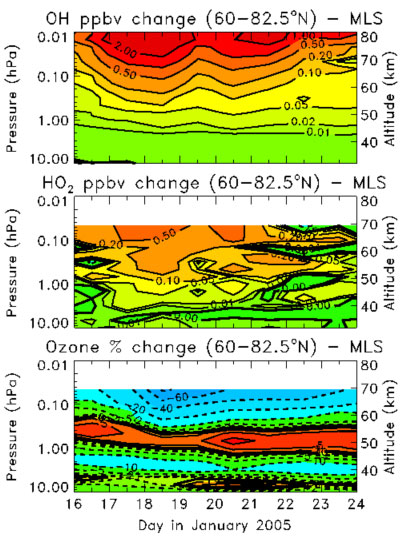 Technical Description of Figure: We adapt Figure 5, 6, and 7 of Jackman et al. (2011) to be able to compare MLS-measured OH, HO2, and ozone in the same Figure. This Figure shows the Solar Proton Event caused changes in the upper stratosphere and mesosphere in the Northern polar region (60-82.5oN) in the period January 16-23, 2005.

Significance: Variations in ozone have been caused by both natural and humankind related processes. The humankind or anthropogenic influence on ozone originates from the chlorofluorocarbons and halons (chlorine and bromine) and has led to international regulations greatly limiting the release of these substances. Certain natural ozone influences are also important in polar regions and are caused by the impact of solar charged particles on the atmosphere. Such natural variations have been studied in order to better quantify the human influence on polar ozone. The Solar Proton Events (SPEs) of January 2005 caused huge measured polar enhancements in the HOx (H, OH, HO2) and NOx (N, NO, NO2) constituents, which led to the destruction of mesospheric ozone.

Simulations with the Whole Atmosphere Community Climate Model (WACCM) of the changes in OH, HO2, and ozone in January 2005 are similar to the Aura MLS measured changes, however, the predictions of the OH and HO2 enhancements are slightly higher indicating that there may be a small problem in the modeled representation of the HOx chemistry. These SPEs also produced longer-lived NOx constituents, which lasted about a month past their initial production by the solar protons. The NOx constituents were transported away from their production region and caused a longer lasting ozone change. Although SPEs are sporadic, they mostly occur near solar maximum. SPEs cause a prompt, predictable perturbation to the atmosphere and can be used to test the chemistry and transport in global models. SPEs, also, can influence the polar regions where their impact on ozone needs to be measured and better predicted so that humankind-caused ozone variations can be more reliably quantified.

Relevance for future science: : This work shows the importance of solar-related processes in the observed variation of the atmosphere. It will be important to carry out further measurements of HOx and NOx constituents in order to understand the variations in ozone. Thus, measurements of the proposed Decadal Survey's Global Atmospheric Composition Mission (GACM) are necessary to continue the work on the influence of solar protons on the mesosphere and stratosphere.