The new OMI algorithm retrieves SO2 altitude, mostly between 9 and 15 km. Microwave Limb Sounder (MLS), also on Aura, has been tracking the Nabro's SO2 clouds with peak altitudes at ~100 hPa. In the few days the volcanic clouds were advected with subtropical jet stream winds over central Asia reaching as far as China (Fig. 2).

Nabro continues to emit SO2 so it's possible that the total SO2 production may be up to 2 Tg. This makes the Nabro eruption among the largest SO2 emissions in the tropics since Pinatubo (~20 Tg). Although other recent tropical eruptions (e.g., Sierra Negra (Galapagos) in 2005, some Nyamuragira (DR Congo) eruptions) have produced comparable SO2 loadings, the Nabro emissions have reached higher altitudes (up to at least 19 km according to CALIPSO space lidar), where resulted sulfate aerosols could stay long enough to produce a measurable climatic perturbation. 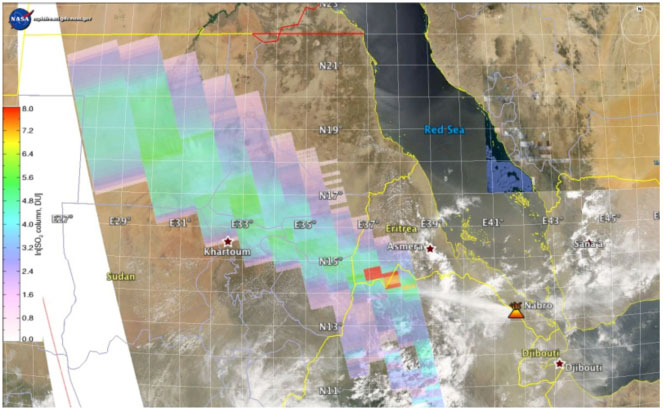 Figure 1. OMI column SO2 amounts in Dobson Units (1 DU = 2.69*1016 molecules/cm2, note logarithmic scale). Red color corresponds to SO2 amounts over 2000 DU. The total SO2 mass plume is estimated ~1.3 Tg, which is a lower limit as part of the proximal plume was not measured due to the OMI row anomaly. Background: Aqua - MODIS natural-color image confirms high water content of the plume 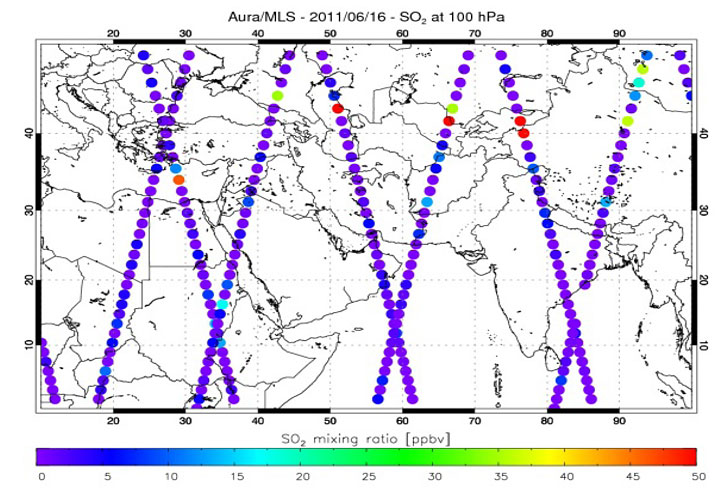 Figure 2. MLS measurements of enhanced SO2 concentration (mixing ratios, ppbv) in advected Nabro volcanic clouds over Central Asia on June 16. The SO2 enhancements were measured at ~100 hPa.

If a volcano near the equator injects a sufficient quantity of sulfur dioxide into the stratosphere, the resulting chemical reactions create reflective aerosols that linger for months or even years, cooling climate by reflecting sunlight. At 13 degrees North of the equator, high altitude plume (>15km) and larger emitted SO2 amount (> 1 Tg) Nabro's eruption could have measurable climatic perturbation. By July 2011 Nabro had cumulatively emitted 5 to 10 percent of what was released by Mount Pinatubo in 1991 (~20 Tg).

Technical Description of Figures:
Figure 1: The false color polygons show burdens of volcanic sulfur dioxide (SO2) gas emitted by explosive eruption of Nabro volcano, as observed by the Dutch/Finnish Ozone Monitoring Instrument (OMI) on NASA's Aura spacecraft. Shown are new data from advanced Iterative spectral Fitting (ISF) algorithm that is more accurate for high SO2 burdens compared to the operational algorithm. Sulfur dioxide is measured here in Dobson Units (note logarithmic scale): The greatest concentrations appear in red; the lowest in lavender. Typically used to measure ozone, the Dobson Unit is the number of molecules of gas that would be required to create a layer 0.01 millimeters thick at a temperature of 0 degrees Celsius and a pressure of 1 atmosphere. We have no validation of these extreme SO2 columns, but fitting errors and simultaneously retrieved ozone amounts all indicate the accuracy about 5%. Background: MODIS natural color image, showing bright white narrow Nabro plume containing large amounts of condensed water vapor and small reflecting aerosols above meteorological clouds: [Go to feature] Figure 2: MLS measurements of the SO2 mixing ratio at pressure level ~100hPa on June 16. The selected pressure level is close to the sub-tropical atmospheric tropopause region where strong westerly jet stream winds quickly advected Nabro's volcanic plume thousands of kilometers Eastward to China.

Relevance for future science and relationship to Decadal Survey:
Aura OMI will continue monitoring volcanic and anthropogenic SO2 from space to detect trends in volcanic and anthropogenic aerosol precursors to provide an overlap with ESA Sentinel-5 precursor mission (TropOMI) planned to launch in 2014. NASA/NOAA Ozone Monitoring and Profiling Suite (OMPS) instrument is slated for the NPP launch in 2011 and subsequent JPSS satellites. OMPS will continue the total ozone and SO2 observational record. Decadal Survey recommended the Geostationary Coastal and Air Pollution Events (GEO-CAPE) mission is planned to launch after 2020. It will allow more frequent monitoring of volcanic and anthropogenic SO2 pollution over America.