Since we began making regular measurements of the vertical structure of ozone in the atmosphere in Costa Rica (Selkirk et al, 2010), numerous ozone profiles have shown unusual notches below 5 km. We speculated that these were due to interference of the ozone measurement by sulfur dioxide emitted from Turrialba, an active volcano 35 km ENE of our launch site in San José.

To test this, we launched a dual ozone sonde payload (i.e., an instrument that measures both ozone and sulfur dioxide and is tied to a large balloon) on February 3, 2012, following the technique developed in Morris, et al. (2010). As shown in Fig. 1, we were able to detect a 15 ppbv layer of SO2 just below 4 km as well as a lower layer about 500 m above the surface. While the lower layer is likely due to urban pollution, the trajectories in Fig. 2 show that the source of the upper layer was very likely to have been the volcano. 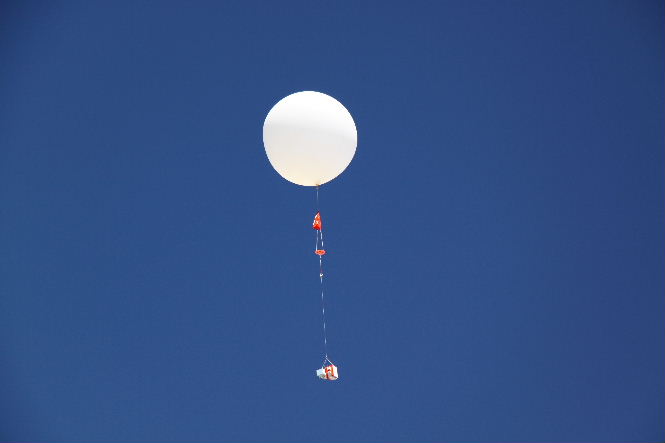 A sonde is a scientific instrument, attached to a balloon, that transmits scientific data back to a ground computer as it moves up through the atmosphere. (Photo credit NASA/JPL) 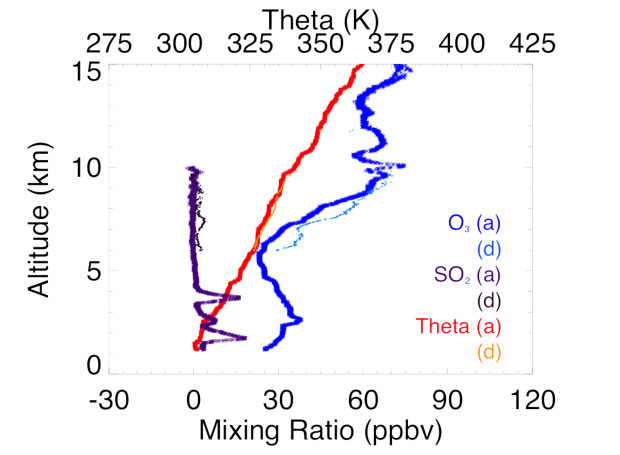 The total amount of SO2 computed along the path of the balloon is 1.4 DU (DU = 2.69x1016 molecules per square centimeter). As shown in Fig. 3, this falls squarely in the range of 1-1.7 DU retrieved by the Aura/OMI instrument overflying just three hours later.

With the near-constant fumarolic activity at Turrialba, further profile measurements at San José will very likely provide an opportunity to improve the OMI retrievals of SO2 (Yang et al., 2007). 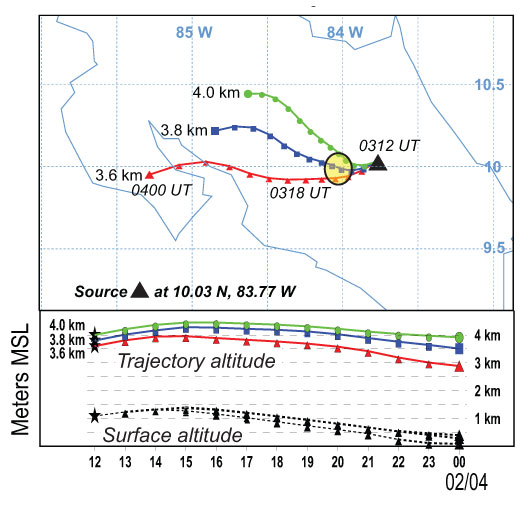 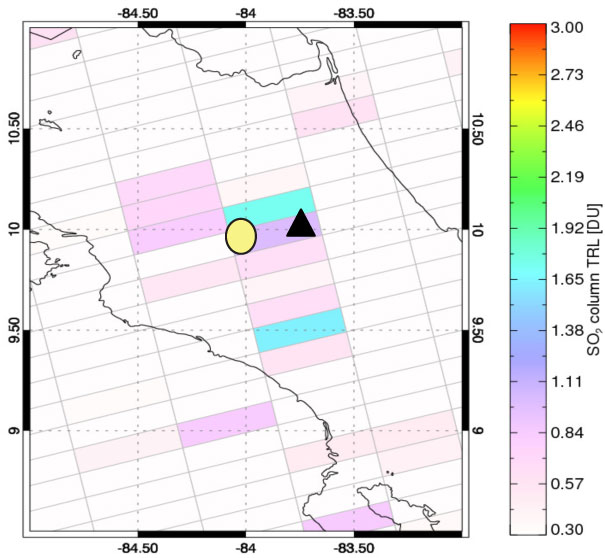 (Above) Figure 3. SO2 column retrievals over Costa Rica from the Aura/OMI instrument at 1851 UT on February 3, 2012. Triangle and yellow oval as in Figure 2.

Technical Description of Image:
Figure 1: The dual ozone sonde payload consists of two electrochemical concentration cell (ECC) ozone sondes mounted in tandem, one with an SO2 filter attached to the inlet. The reaction with SO2 in the ECC cathode cell is the stoichiometric opposite of the O3 reaction. Thus, provided the SO2 mixing ratio is lower than the ambient ozone and the two ozone sondes are well calibrated, the SO2 mixing ratio can be derived by differencing the two sondes. Figure 2: Output from the NOAA Hybrid Single Particle Lagrangian Integrated Trajectory (HYSPLIT) Model. The model was run in Normal mode with GDAS archive winds.
Figure 3: This is the 3-km OMI SO2 product which assumes the center of mass of the SO2 to be at 3 km. Columns amounts are given in Dobson units (DU) which is the number of molecules of gas that would be required to create a layer 0.01 millimeters thick at a temperature of 0 degrees Celsius and a pressure of 1 atmosphere.

Scientific significance:
SO2 is both a significant pollutant in urban regions and an important trace gas emitted by volcanoes around the world with importance both to human health and to the natural environment. While satellite remote sensing measurements provide world-wide column coverage, retrievals are sensitive to SO2's vertical structure, hence the importance of in situ profiling. Furthermore, while volcanic plumes are episodic even in regions close to active volcanoes, near-surface layers of SO2 in polluted urban environments may well be going undetected and in the process inducing unknown negative bias into single-sonde ozone profiles in those locations.

Relevance for future science and relationship to Decadal Survey:
Aura OMI will continue monitoring anthropogenic and natural volcanic SO2 pollution sources from space to detect trends in this important pollutant and aerosol precursor to provide an overlap with recently launched Ozone Monitoring and Profiling suite (OMPS) on the US Next generation weather satellite Suomi-NPP. The Decadal Survey recommended the Geostationary Coastal and Air Pollution Events (GEO-CAPE) Tier 2 mission which is planned to launch after 2020. It will allow more frequent monitoring of anthropogenic NO2 and SO2 pollution over North and Central America. A next generation OMI-like sensor (TROPOMI) is planned for launch by ESA in 2015 as a Sentinel-5 precursor mission; it will measure SO2 with an increased ground resolution of 7 km by 7 km. All of these satellite measurements will benefit from in situ profiling of SO2.