A new emission-source detection algorithm was applied to the measurements of sulfur dioxide (SO2) from the Ozone Monitoring Instrument (OMI) on-board the NASA Aura satellite. It was used to compile the first global, satellite-based emissions inventory, and is completely independent of conventional information sources.

Nearly 40 of the sources identified by this new method were found to be missing from leading emissions inventories, representing about 12% of the global total. Regionally, emissions can be off by factors of 2 or 3. Many of the missing SO2 sources were located in the Middle-East and related to the oil & gas sector. This method has potential applications to other pollutants (NOx, particulate matter). 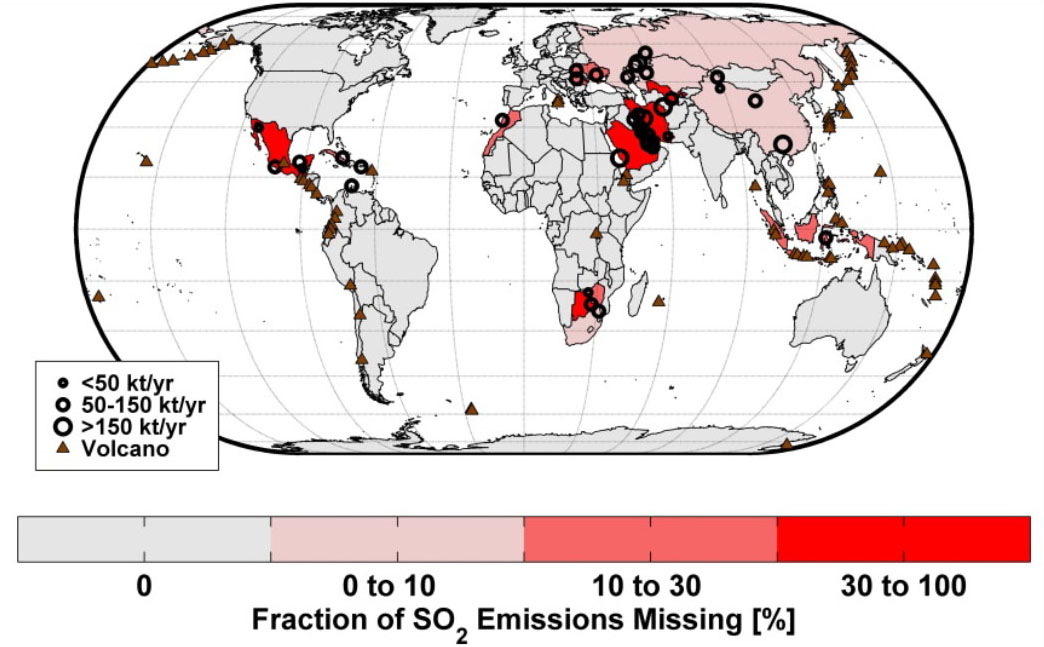 Summary of the geographic distribution of missing sources of SO2 . The location and magnitude of missing SO2 emission sources and volcanic SO2 sources. Also, each nation is color-coded according to the fraction of emissions that were found to be missing from their national totals. 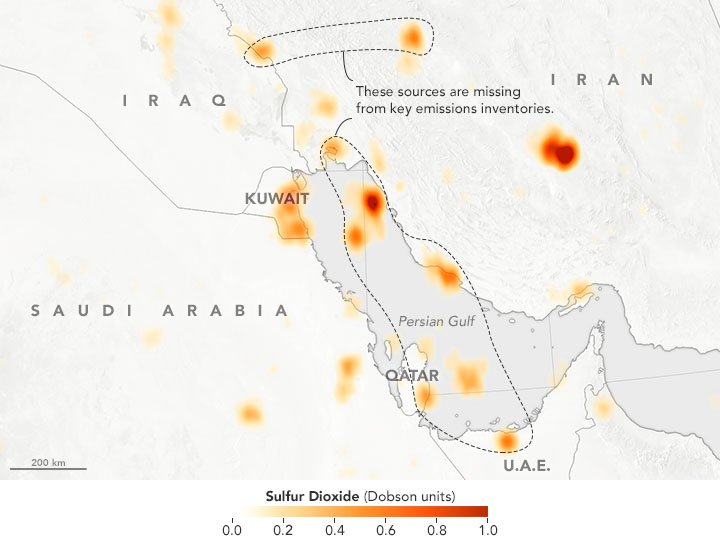 Satellite detection of missing SO2 sources in the Middle-East. The map shows the downwind-upwind difference in OMI SO2 for the years 2007-2009. The downwind-upwind difference, determined by merging OMI measurements with wind information, is an indicator used to determine the presence of a source of SO2. The missing sources are indicated by the dashed line. The units of SO2 are vertical column density [measured in Dobson Units, where 1 Dobson Unit = 2.69x1016 molecules cm-2].

These results represent the first global satellite-derived emissions inventory. It is independent of previous, conventional knowledge sources and hence can be used to both verify emissions and locate new or unaccounted for emissions sources. Further, it provides a consistent method for deriving emissions, independent of source type and geopolitical borders. We find that of the 500 or so large sources in our inventory, nearly 40 are not captured in leading conventional inventories. These missing sources are scattered throughout the developing world (e.g., over a third are clustered around the Persian Gulf) and add up to roughly 6-12% of the global anthropogenic total. This method can be used for other short-lived pollutants such as nitrogen oxides, particulate matter, and ammonia.

The next generation of instruments will enable more accurate emissions and improved detection limits. This includes the TROPOspheric Monitoring Instrument (TROPOMI) mission, planned for launch on ESA's Sentinel 5 Precursor (S5P) satellite in 2016, and later on the geostationary consteallation of satellites: NASA's first EV-I Tropospheric emissions: monitoring of pollution (TEMPO) over North America, over Europe (ESA's and Copernicus Sentinel 4 UVN ) and East Asia (Geostationary Environment Monitoring Spectrometer (GEMS) on board the GeoKOMPSAT satellite).