A decade of Microwave Limb Sounder (MLS) Nitrous oxide (N2O) reveals a remarkable transport pipeline from the midlatitude middle stratosphere to the Antarctic lower stratosphere, allowing tropical winds to modulate how much chlorine reaches the Antarctic ozone hole each year. 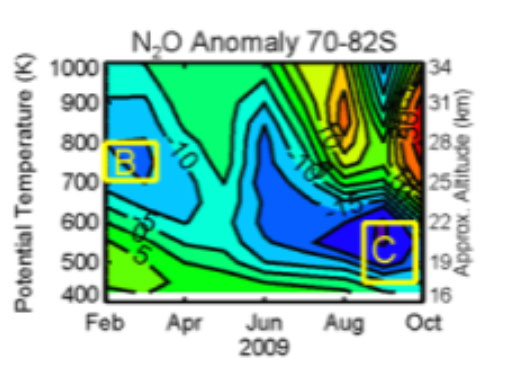 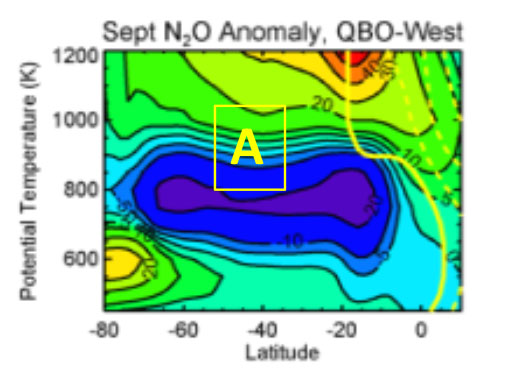 The tropical zonal wind changes from easterly to westerly with a period of about 28 months. This is called the QBO. When the QBO is westerly during winter, it creates a circulation causing negative (low N2O) anomalies in the midlatitudes. When the QBO is easterly, the circulation creates positive N2O anomalies there. The QBO-W anomaly is shown below.

By the end of winter (September), the QBO meridional circulation fills the southern middle stratosphere from the subtropics to the edge of the polar vortex with an anomaly. In this example, the QBO-West phase created a low N2O anomaly. This is the area labelled 'A'.

In December, after the vortex breaks down, the midlatitude anomaly mixes all the way to the pole where it remains through summer. In March (fall), the N2O anomaly at high latitudes becomes trapped in the forming vortex ('B'). During fall and winter, the anomaly descends inside the vortex, reaching the lower stratosphere by September ('C').

The correlation between anomaly time series for regions A and C is 0.9.

Over the course of 1 year, variations in N2O driven by the tropical winds travel nearly undiminished from their origin in the midlatitude middle stratosphere to the Antarctic lower stratosphere. Similar QBO-driven anomalies can be expected for other long-lived constituents such as inorganic chlorine (Cly). 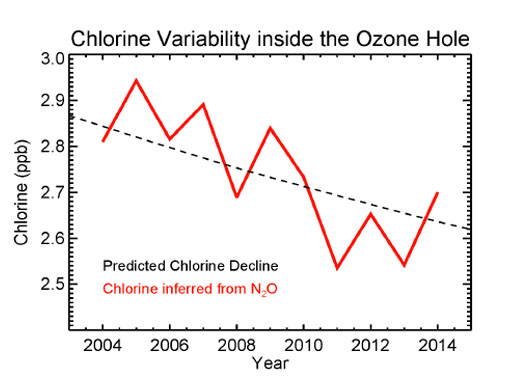 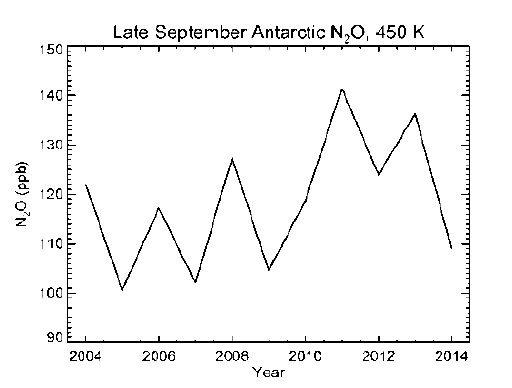 MLS N2O in the Antarctic lower stratospheric vortex from 2004-2014. Using the vortex-averaged MLS N2O and the compact correlation between N2O and Cly, we estimate vortex-averaged Cly each year . Because N2O interannual variability driven by the QBO is large, Cly variability is also large. The figures are derived from the references and include new MLS N2O data available since publication.

MLS N2O measurements provide crucial information that allows us to infer inorganic chlorine levels inside the Antarctic ozone hole during the period of ozone depletion (Aug & Sep). This information make possible the attribution of O3 changes to the impact of the Montreal Protocol - no other satellite instrument provides comparable dynamical information.

Although globally Cly is declining due to the cessation of CFC emissions (due to the Montreal Protocol), Antarctic Cly is not always lower from one year to the next. The dashed line shows the expected Cly decline in the absence of dynamical variability (~22 ppt/yr). The year-to-year Cly variability is so large compared to the small annual decline expected that a decade is required for a statistically significant Cly decline.