The new-generation Ozone Monitoring Instrument (OMI) volcanic Sulfur Dioxide (SO2) dataset, produced with an advanced principal component analysis (PCA) algorithm, is now available to all data users as part of the OMI SO2 product (OMSO2).

The data will help in decision making for volcanic disaster avoidance

The new algorithm also produces highly consistent retrievals from SNPP OMPS, enabling the use of OMPS to supplement OMI spatial coverage, and to extend the OMI time series. Note that OMI still provides finer resolution that reveals details of the volcanic plume and helps to detect small emission sources.

Volcanic SO2 is a dominant natural forcing to the Earth's climate system and can also pose severe threat to aviation safety. The new OMI and OMPS datasets in this study will provide more accurate estimates of volcanic emissions, including relatively small volcanoes for which the emissions have been poorly constrained. This will help to better understand and quantify the climate impacts of volcanic eruptions. The OMI and OMPS PCA SO2 data are now both being produced and public released within few hours of satellite overpass. The data will help operational data users in decision making in volcanic disaster avoidance.

The PCA algorithm's capability of producing highly consistent retrievals between different instruments, as demonstrated in this study, will allow the NASA SO2 data record to be extended well beyond the EOS era. In addition to OMI and SNPP OMPS, the algorithm will also be applied to future satellite instruments such as ESA's TROPOMI, JPSS OMPS, and new geostationary missions such as NASA's TEMPO (the first EV-I instrument). 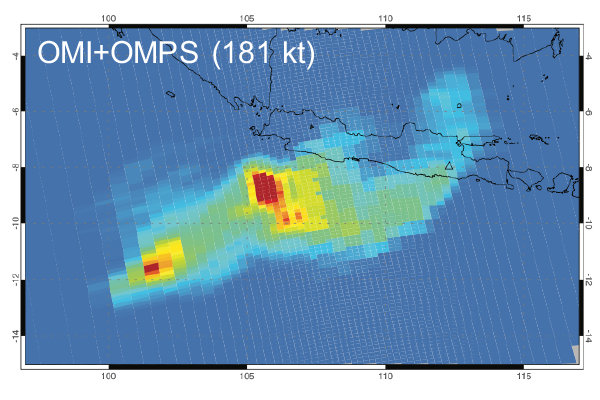 An integrated SO2 map for the same volcanic plume, produced by combining OMI and OMPS retrievals and assigning OMPS SO2 value from the nearest OMPS pixel to each OMI row anomaly pixel. For this particular case, the OMI and OMPS overpasses were only 30 min apart. The overall SO2 mass estimated from the integrated map is 179 kt. This agrees with the OMPS-only estimate (181 kt) to within 3%, indicating highly consistent results between the two sensors. Note that OMI still offers finer spatial resolution that is key to the detection of small emission sources. 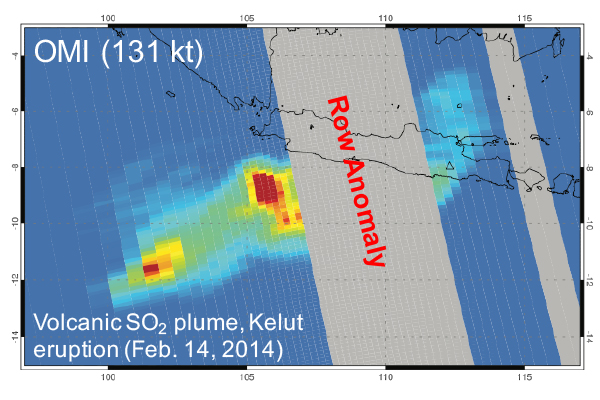 A snapshot of the volcanic SO2 plume from the Kelut eruption in Indonesia, retrieved with the PCA algorithm from OMI radiance data acquired on February 14, 2014. The estimated overall SO2 mass within the plume is 131 kt (kiloton). This is likely biased low, as a sizable part of the plume was absent due to the OMI row anomaly.

Daily OMI and OMPS SO2 mass within the plume from the Kīlauea volcano in Hawaii (active since 1986). Overlapping data for this relatively isolated source help to determine the consistency between the two satellite datasets.

Black triangles: the daily total SO2 loading within the Kīlauea plume estimated based on OMI PCA retrievals from 2004 to 2015.
Red line: the daily SO2 loading for the same area estimated from OMPS PCA retrievals from 2012 to 2015. There is great consistency between the OMI and OMPS time series shown in the figure, with correlation coefficient of ~0.9 and slope close to one.