From the Ozone Monitoring Instrument to the Ozone Mapping Profiler Suite

Sulfur dioxide (SO2) is an important pollutant gas that has significant impacts on the environment and climate at global, regional, and local scales. Aura's Ozone Monitoring Instrument (OMI) has been providing global monitoring of anthropogenic SO2 pollution over the past 12+ years. As Aura has entered the stage of extended mission and OMI has lost part of its spatial coverage due to instrument issues, it is critical to continue the global anthropogenic SO2 record with new instruments.

It is challenging to build consistent, multi-satellite datasets necessary for long-term monitoring and trend studies. This is because anthropogenic SO2 is mostly near the surface, and its column loading is typically less than 1% of that of O3, a major interference in SO2 retrievals. A small bias in O3 can lead to large artifacts in retrieved SO2. Our newly developed principal component analysis (PCA) SO2 algorithm helps to address this challenge by using information extracted from the radiance data to minimize the influences of O3 and other interferences. This greatly reduces the noise and bias of SO2 retrievals compared to the previous method and allows smaller emission sources to be detected from space.

In this study, we applied the OMI PCA algorithm to Suomi NPP / Ozone Mapping Profiler Suite (OMPS). Despite the coarser spatial and spectral resolutions, and a ~10 minute difference of equator crossing time from OMI, OMPS shows good correlations (r = 0.79-0.96) with OMI for various regions. We also compared the annual emissions for ~400 SO2 sources around the globe, estimated with our OMI and OMPS SO2 data.

The emissions show a very good correlation (r=~0.9) between the two instruments for each year during 2012-2015. OMPS-detected SO2 point source emissions are slightly lower than those from OMI, but OMI-OMPS differences decrease with increasing strength of source. Good consistency between the two instruments provides confidence that the OMPS nadir mapper and similar future instruments planned for the follow-up JPSS-1,-2,-3,-4 NOAA operational satellites with improved spatial resolution similar to OMI, can be used to continue the long-term anthropogenic SO2 record started by OMI. 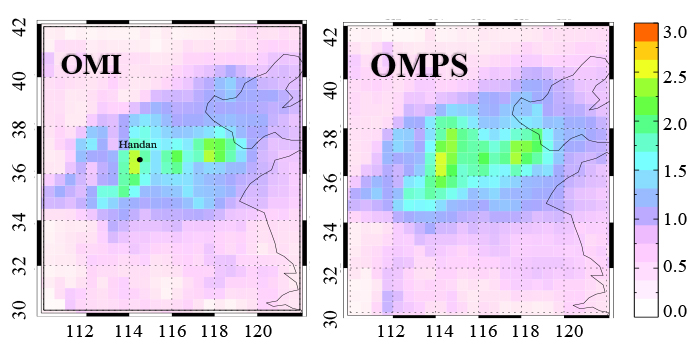 Above : Daily SO2 variations (bottom) of OMPS and OMI mass (kt) within the domain during 2012-2015. Consistent variations between the two instruments indicate that both can detect changes in pollution due to synoptic conditions, and OMPS is well-suited to continue the daily monitoring of SO2 pollution currently offered by OMI.