Formaldehyde is the top hazardous air pollutant of concern to EPA. It has a large natural atmospheric source from the oxidation of isoprene, a volatile organic compound emitted from trees, especially in the Southeast US.

The formaldehyde (HCHO) yield from isoprene oxidation is dependent on the concentration of a primarily anthropogenic pollutant, nitrogen oxides (NOx). Therefore recent reductions in NOx emissions from power plants and cars because of environmental regulations likely have also decreased the natural production of HCHO. 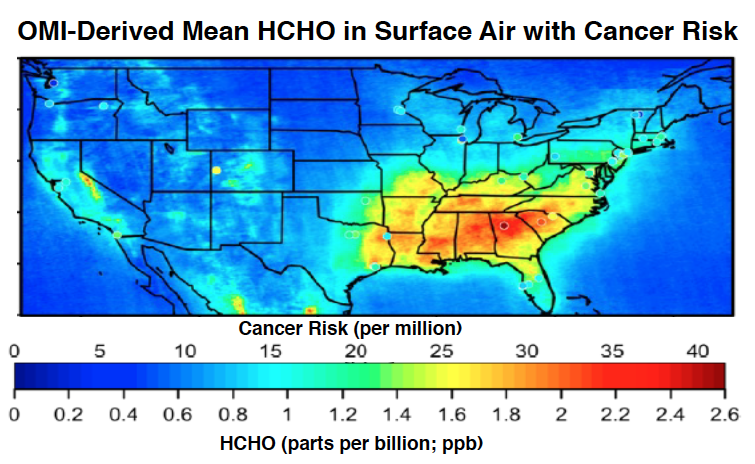 Formaldehyde (HCHO) is the most important carcinogen in outdoor air among the 187 hazardous air pollutants (HAPs) identified by the U.S. Environmental Protection Agency (EPA), not including ozone and particulate matter. However, surface observations of HCHO are sparse and the EPA monitoring network could be prone to positive interferences.

Here we use 2005—2016 summertime HCHO column data from the OMI satellite instrument, validated with high-quality aircraft data and oversampled on a 5x5 km2 grid, to map surface air HCHO concentrations across the contiguous U.S. OMI-derived summertime HCHO values are converted to annual averages using the GEOS-Chem chemical transport model. Results are in good agreement with high-quality summertime observations from urban sites (-2% bias, r = 0.95) but a factor of 1.9 lower than annual means from the EPA network. We thus estimate that up to 6,600—12,500 people in the U.S. will develop cancer over their lifetimes by exposure to outdoor HCHO. The main HCHO source in the U.S. is atmospheric oxidation of biogenic isoprene, but the corresponding HCHO yield decreases as the concentration of nitrogen oxides (NOx ≡ NO + NO2) decreases. A GEOS-Chem sensitivity simulation indicates that HCHO levels would decrease by 20—30% in the absence of U.S. anthropogenic NOx emissions. Thus, NOx emission controls to improve ozone air quality have a significant co-benefit in reducing HCHO-related cancer risks.

Data Sources: We use OMI HCHO Version 2.0 (Collection 3) retrievals from the Smithsonian Astrophysical Observatory (OMI-SAO), available at https://disc.sci.gsfc.nasa.gov/Aura/data-holdings/OMI/omhcho_v003.shtml. The data archive extends from 2005 to present. We select data for June-August 2005-2016 that (1) pass all the fitting and statistical quality checks (MainDataQualityFlag = 0), (2) have cloud fraction less than 0.3 and solar zenith angle less than 60°, and (3) are not affected by the instrumental "row anomaly". The single-scene precision is 1 x 1016 molecules cm2, which corresponds to about 2 ppb in a 2 km deep well-mixed boundary layer. The precision can be improved by Multi-scene averaging. We only use the summertime data when HCHO columns are highest and detectable from space. HCHO columns in winter are generally below the detection limit due to (1) low biogenic VOC emissions, and (2) low OH concentrations delaying the oxidation of anthropogenic VOCs to HCHO and thus spatially smearing the HCHO signal.