Which processes drive observed variations of Formaldehyde columns over India?

Formaldehyde (HCHO) plays a role in determining the oxidizing capacity of the global troposphere. The principal source of HCHO is the oxidation of methane (CH4), which provides a global ambient background. Minor direct HCHO sources include biomass burning, industry, agriculture, automobiles, shipping, and vegetation.

Because India has the sixth largest economy and the second largest population of any country, it also has one of the largest increases in mortality rates due to chronic exposure to elevated levels of surface ozone and particulate matter. We interpret spatial and temporal variations in HCHO column distributions over India observed by the Aura Ozone Monitoring Instrument (OMI) and find that HCHO has biogenic, pyrogenic, and anthropogenic sources. We also found that on a continental scale much of the seasonal cycle in observed HCHO columns can be explained by monthly variations in surface temperature. One source for HCHO over India includes biomass burning, which makes a significant contribution to observed columns during March and April over northeastern India.

Our ability to interpret HCHO sources will be improved by the launch of TROPOMI aboard Sentinel-5P, which will result in daily maps of HCHO columns at a spatial resolution of 7 km with increased clear-sky scenes available. Currently, Aura overpasses once per day in the early afternoon, giving only a "snapshot" of HCHO levels.

The upcoming NASATEMPO mission, which will be in geosynchronous orbit, will allow the hourly evolution of HCHO emissions to be studied. 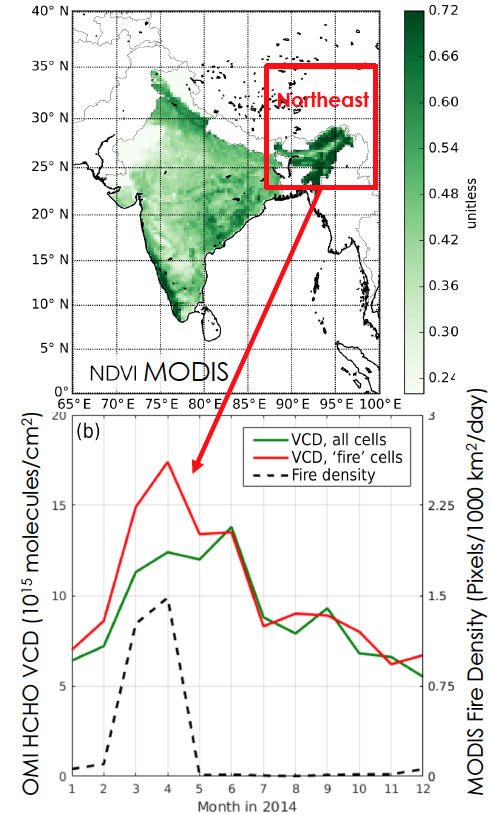 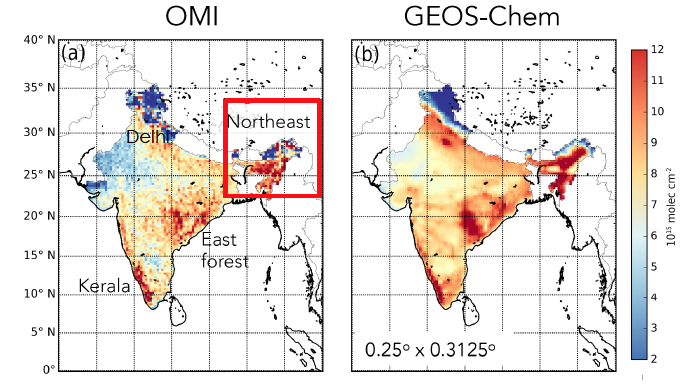 Annual mean values of the Normalized Difference Vegetation Index (NDVI) for 2014 from the NASA MODIS instrument (top right), averaged on the 0.25° x 0.3125° GEOS- Chem nested grid shows forested regions in southwest, east, and northeast India. Corresponding time series of monthly mean HCHO columns (1015 molec.cm-2) and the number of MODIS fire detections (103 km2 day-1) over northeastern India. The green line denotes all HCHO columns over the region and the red line denotes columns that are most affected by fires as indicated by MODIS fire counts.