Polar temperatures from modern meteorological reanalyses are in much better agreement than were their counterparts from previous decades. Increased confidence in the accuracy of polar reanalysis temperatures provides tighter constraints on model parameterizations of microphysics/chemistry used to represent polar chemical processing. 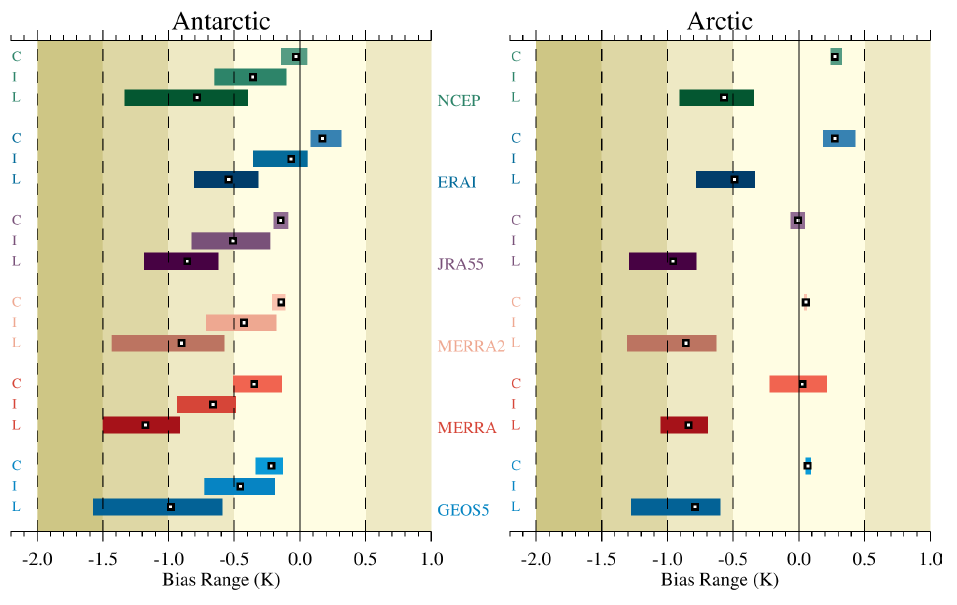 Temperature bias ranges of the reanalyses relative to the polar stratospheric liquid cloud (L) and ice cloud (I) temperature references, calculated from equilibrium thermodynamics (see text opposite), and COSMIC GPS (C) temperatures, for Antarctic and Arctic winters 2008- 2013, poleward of 60°, and for pressures 68 hPa to 21 hPa.

Scientific significance, societal relevance, and relationships to future missions:
Stratospheric ozone depletion has been a central theme of atmospheric science since the discovery of the Antarctic ozone hole. Formation of polar stratospheric cloud particles and the heterogeneous chemistry which takes place on their surfaces are threshold processes that depend critically on temperature. Temperature biases in older meteorological reanalyses often rendered them unsuitable for accurate modeling of the interannual variability of PSC formation, and the subsequent denitrification, chlorine activation and chemical ozone loss. We have shown that the temperatures from modern meteorological reanalyses are in much better agreement, and therefore provide tighter constraints on the extent to which any resulting deficiencies in modeled chlorine activation and/or modeled ozone losses can be ascribed to temperature biases. This research was carried out as part of the SPARC Reanalysis Intercomparison Project (S-RIP).