The Tropospheric Ozone Assessment Report (TOAR) is an activity of the International Global Atmospheric Chemistry Project. This paper is a component of the report, focusing on the present-day distribution and trends of tropospheric ozone relevant to climate and global atmospheric chemistry model evaluation. Utilizing the TOAR surface ozone database, several figures present the global distribution and trends of daytime average ozone at 2702 non-urban monitoring sites, highlighting the regions and seasons of the world with the greatest ozone levels. Similarly, ozonesonde and commercial aircraft observations reveal ozone’s distribution throughout the depth of the free troposphere.

Long-term surface observations are limited in their global spatial coverage, but data from remote locations indicate that ozone in the 21st century is greater than during the 1970s and 1980s. While some remote sites and many sites in the heavily polluted regions of East Asia show ozone increases since 2000, many others show decreases and there is no clear global pattern for surface ozone changes since 2000. Two new satellite products provide detailed views of ozone in the lower troposphere across East Asia and Europe, revealing the full spatial extent of the spring and summer ozone enhancements across eastern China that cannot be assessed from limited surface observations.

Sufficient data are now available (ozonesondes, satellite, aircraft) across the tropics from South America eastwards to the western Pacific Ocean, to indicate a likely tropospheric column ozone increase since the 1990s. The 2014–2016 mean tropospheric ozone burden (TOB) between 60˚N–60˚S from five satellite products is 300 Tg ± 4%. While this agreement is excellent, the products differ in their quantification of TOB trends and further work is required to reconcile the differences. Satellites can now estimate ozone’s global long-wave radiative effect, but evaluation is difficult due to limited in situ observations where the radiative effect is greatest.

A more robust quantitative understanding of present-day tropospheric ozone variability is needed to place projections of its future evolution on a firm foundation. 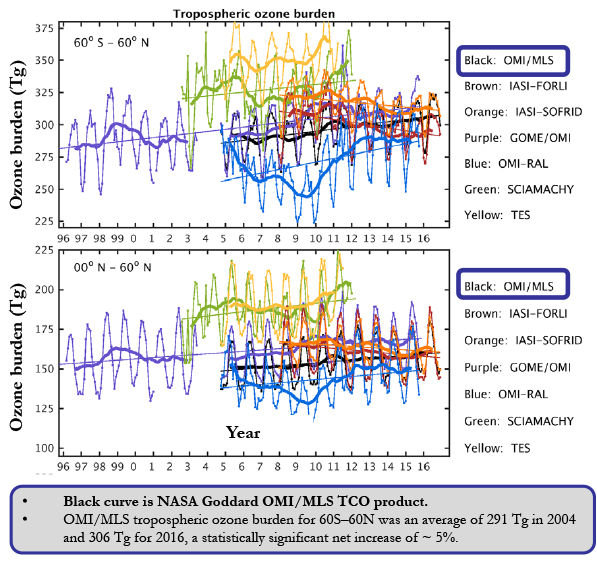 Scientific significance, societal relevance, and relationships to future missions:
The processes controlling tropospheric ozone are many and complex, including emission of precursor species, their subsequent chemical evolution and transport (including long-range horizontal transport and rapid lofting by deep convection), and the influx of ozone-rich air from the stratosphere. The Tropospheric Ozone Assessment Report (TOAR) is a community-wide activity to address questions related to the present day amount and expected evolution of tropospheric ozone and consequent impacts on human and ecosystem health. This paper, part of the TOAR report, examines the observed global distribution of and recent trends in tropospheric ozone and establishes benchmarks for model studies to meet. Missions and instruments that do or will provide information on tropospheric ozone include NASA’s Aura and TEMPO missions, along with a potential opportunity in the new “Earth Explorer” project line. Non-NASA sources include NOAA’s JPSS series of sensors and various sensors from other countries/agencies.