In this study, we present the result of the application of space-based sulfur dioxide (SO2) observations to evaluate the efficacy of cleantech solutions in reducing air polluting emissions from metal smelting. We analyze the Ozone Monitoring Instrument (OMI) satellite-based SO2 observations over Tsumeb (Namibia) and Bor (Serbia) copper smelters, where two sulfur-capture plants, designed to transform gaseous SO2 emissions into sulfuric acid, were implemented in 2015. We observe a reduction in the annual SO2 emissions by up to 90% after 2015 at both smelters, as a result of the implementation of the sulfuric acid plants. 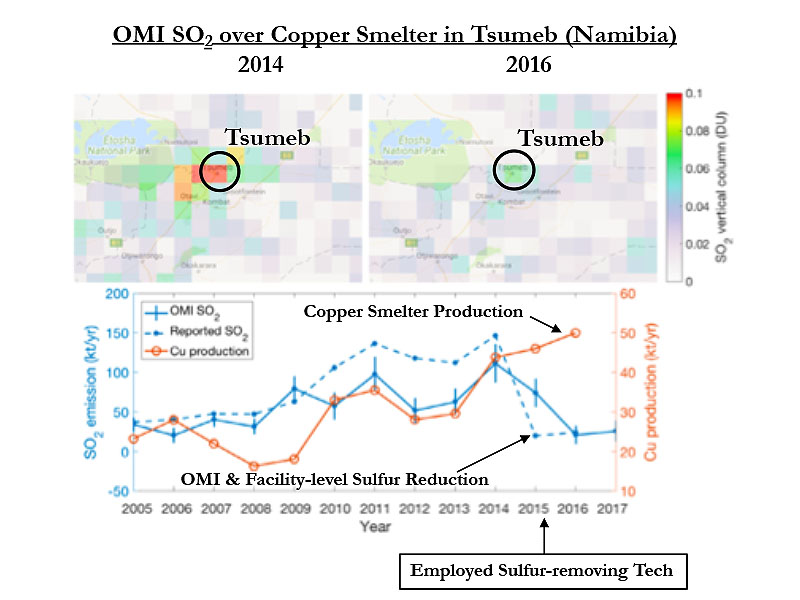 SO2 levels from copper smelter in Tsumeb (Namibia). Upper panel: SO2 total columns during 2014 (peak year) and 2016 from OMI SO2 L3 product. Lower panel: SO2 emissions from OMI-based catalogue (blue solid line) and from Wood & Mackenzie database (blue dashed line). The error bars represent 2 standard deviations from the annual mean derived from OMI-based emission catalogue. The copper smelter production is shown with a red line.


The OMI-based emission estimates are mostly in line with those reported at facility-level and reproduce the same year-to-year variability. This variability is driven by the changes in the copper production, the sulfur-to-copper ratio and by the technology employed to reduce the SO2 emissions. OMI observations are directly used by the company operating the sulfuric acid plants to confirm the efficacy of the employed technology using independent satellite-based observations. The results demonstrate how satellite-based observations are able to detect relative changes in SO2 emissions and can be used to verify and complete existing emission information. The approach presented here can be applied to other sources on global scale to support cleantech companies as well as decision-makers involved in environmental policies and sustainable development.

Output of this study was directly used by the company operating the sulfuric acid plants to confirm the efficacy of the employed technology using independent OMI-based SO2 observations. The results demonstrate how satellite-based observations can be used to support companies in achieving their responsibility and sustainability goals. TROPOMI and the upcoming TEMPO mission will extend this data record with higher spatial and temporal information, increasing the amount of detectable SO2 sources (especially for small sources) and will open new opportunities for societal applications of satellite-based data in both the public and private sectors.

Since anthropogenic SO2 emissions are mainly injected into the planetary boundary layer (PBL), the OMI operational PBL SO2 Level 3 (L3) product (available at GES DISC) was used to monitor the SO2 levels around the copper smelters. Annual SO2 emission estimates based on OMI observations are derived from the Multi-Satellite Air Quality Sulfur Dioxide (SO2) Database Long-Term Level 4 Global Version 1 (MSAQSO2L4, Fioletov et al., 2017). The catalogue contains the site coordinates, source type, country, source name, annual SO2 emissions and uncertainties, and the number of OMI SO2 measurements used for emissions estimates near each source. The emissions estimates are obtained by fitting the SO2 VCDs to an empirical plume model describing the SO2 spatial distribution near the emission sources. The facility-level SO2 emission estimations from Wood & Mackenzie 2017 Copper Smelter database are used for comparison. This is a commercial database which provides the primary copper production, copper and sulfur grades of concentrate and percentage of sulfur recovery.