The model simulations and observations show large differences in the magnitude of interannual variability in ozone between northern tropic (NT; EQ-18∘ N) and southern tropic (EQ-18∘ S) during boreal summer but small differences in winter. The interannual variability during boreal summer is highly correlated with summer sea surface temperatures in the eastern and central Pacific Ocean and El Niño–Southern Oscillation (ENSO) events.

Larger variability in NT ozone is primarily due to meridional advection, connected to the changes in the onset date and strength of the Asian summer monsoon anticyclone. The Asian summer monsoon anticyclone forms earlier in a season and tends to be stronger during cold (La Niña) events leading to more isentropic transport of ozone from the extratropics into the NT, with the reverse for warm (El Niño) events. 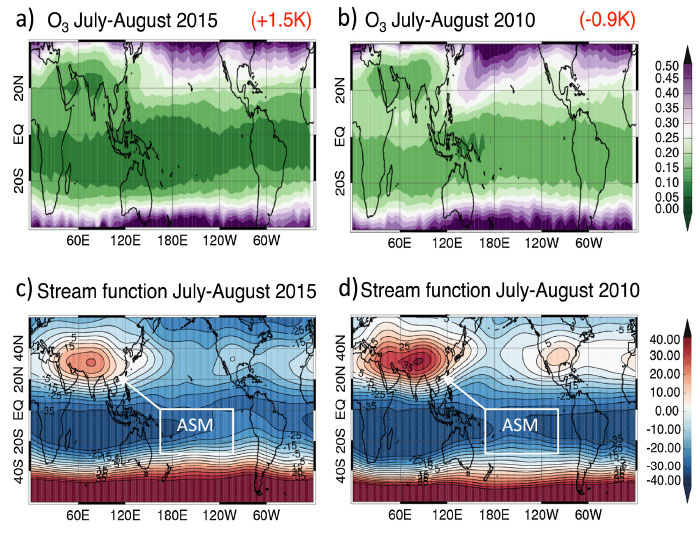 MLS observations (top) show that boreal summertime O3 abundances were larger throughout most of the tropics during the La Niña in 2010 than during the El Niño in 2015. Influx of O3-rich air along the eastern flank of the ASM anticyclone into the northern tropics was also stronger in 2010. These differences in O3 are consistent with the differences in the strength of the monsoon anticyclone between El Niño & La Niña, as shown by stream functions from MERRA-2 (bottom).

The chemical composition of the tropical lower stratosphere plays a key role in the climate system, and even small changes in the concentration and distribution of radiatively active gases such as ozone and water vapor in this region substantially influence radiative forcing and therefore global climate. ENSO-related variability in the Asian summer monsoon affects the transport of ozone into the tropics and thus surface ultraviolet radiation and also potentially near-surface ozone abundances. Because ENSO usually peaks during boreal winter, most previous studies have focused on cold-season (December–February) events. This paper is one of the few to examine the role of warm-season ENSO events in controlling interannual variability in tropical lower stratospheric ozone while using Aura MLS observations. Future studies using vertically resolved limb measurements of O3 similar to Aura MLS will be continued by the Ozone Mapper and Profiler Suite Limb Profiler (OMPS-LP) scheduled to be launched on the Joint Polar Satellite System (JPSS)-2 spacecraft in 2022.