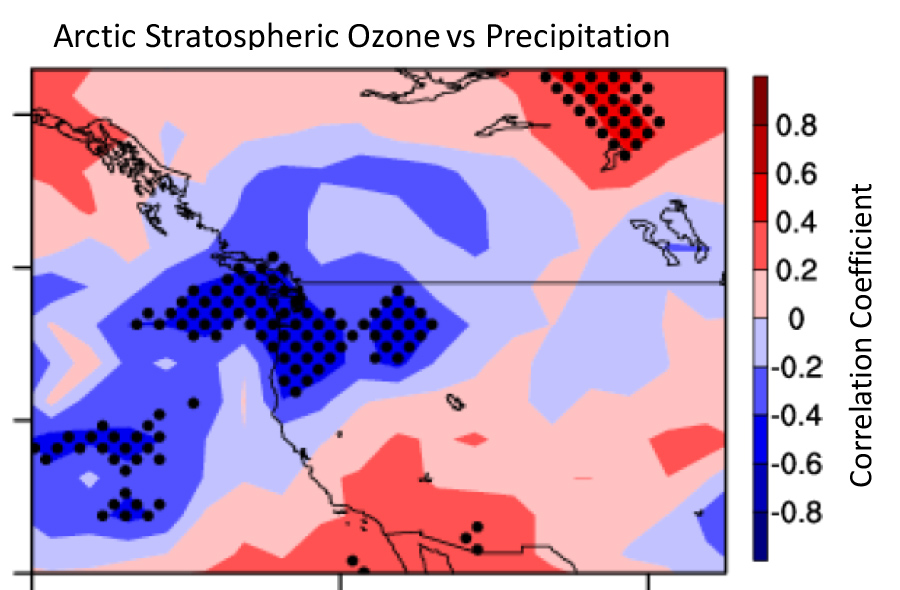 Changes in April precipitation on the US west coast are strongly anticorrelated (blue contours) with March Arctic stratospheric ozone (ozone averaged over the latitude range 60oN-90oN at pressure levels 100-50hPa). The month lag between the two variables reflects the time taken for the stratospheric circulation anomaly to propagate down to the lower atmosphere.

Simulations by a state-of-the-art chemistry climate model help understand a strong correlation between March Arctic stratospheric ozone (provided by the Aura Microwave Limb Sounder among other measurements) and April precipitation (provided by several satellite datasets and gauges) on the west coast of the United States.

Figure 1 of above reference. Correlation coefficients between March Arctic stratospheric ozone (ozone averaged over the latitude range 60oN-90oN at pressure levels 100-50hPa) and April precipitation variations calculated from SWOOSH and GOZCARDS ozone and GPCC and GPCP rainfall for the period 1984–2016. Dots denote significance at the 95% confidence level, according to Student’s t test. The long-term linear trend and seasonal cycle in all variables were removed before the correlation analysis.

Improving subseasonal to seasonal forecasting is a key current focus of the atmospheric science community. Stratospheric ozone and precipitation measurements as well as reanalysis fields and model simulations were used to argue that March Arctic stratospheric ozone variations are correlated with April precipitation on the west coast of the US, suggesting that those ozone variations could be a useful predictor of spring precipitation in such areas. Hence, the results of this study underscore the critical need for continued monitoring of vertically resolved profiles of stratospheric ozone to quantify its impact upon tropospheric climate. In addition to the continuing record from Aura MLS and other current sensors, vertically resolved limb measurements of ozone will be available from the planned Ozone Mapper and Profiler Suite Limb Profiler (OMPS-LP) scheduled to be launched on Joint Polar Satellite System (JPSS)-2 in 2022.