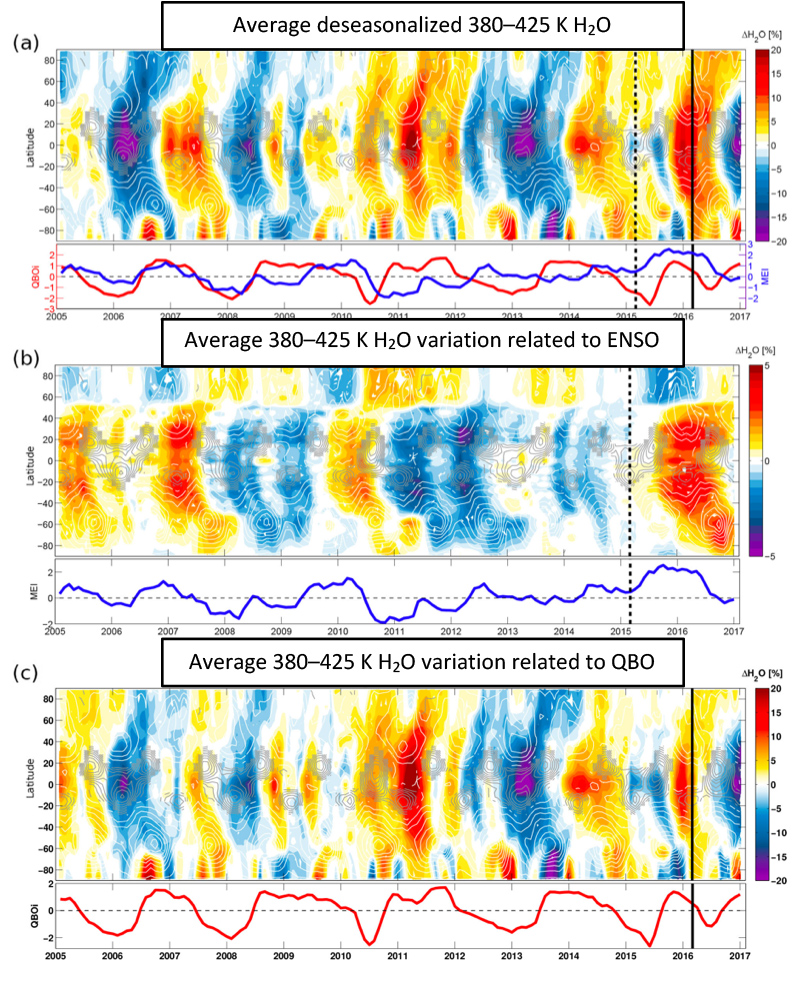 An extremely strong El Niño event reached its peak in boreal winter 2015/2016. At nearly the same time, an unprecedented disruption of the QBO cycle took place, with an abrupt shift from westerly to easterly wind shear.

To disentangle the impacts of ENSO and QBO on stratospheric composition from those of other sources of natural variability, Aura Microwave Limb Sounder (MLS) measurements of monthly mean ozone and water vapor are analyzed using a multiple regression model.

The QBO disruption was found to dominate the lower stratospheric water budget, inducing larger anomalies than the ENSO event.

The interplay between ENSO events and QBO phases will be crucial for the distributions of radiatively active trace gases in the future, when climate change is expected to increase El Niño-like conditions and decrease lower stratospheric QBO amplitude.

MLS measurements show that the lower stratosphere was substantially moistened in the 2015/2016 boreal winter when a strong El Niño aligned with the westerly QBO phase. Then an abrupt shift to easterly QBO in February 2016 dehydrated the global lower stratosphere.

Latitude-time evolution of (a) global deseasonalized MLS H2O, together with the (b) ENSO and (c) QBO impacts on lower stratospheric H2O, in percent change from long-term zonal monthly means derived from a multiple regression fit and averaged between 380 K and 425 K for the 2005–2016 period. Note that there is a factor of four difference in the color scales between (b) and (c), reflecting the difference in the magnitude of the H2O changes related to ENSO compared to those related to the QBO. The vertical black dashed line indicates the onset of the warm El Niño event in February 2015. The vertical black solid line indicates the onset of the QBO shift in February 2016. The monthly averaged zonal mean zonal wind component, u (m s–1), from ERA-Interim between 380 K and 500 K is overlaid as solid white (westerly) and solid gray (easterly) lines. The lowermost panel in each set shows the QBO index at 50 hPa in red and the multivariate ENSO index (MEI) in blue.

Although vertically resolved limb measurements of O3 will be continued by the Ozone Mapper and Profiler Suite Limb Profiler (OMPS-LP) scheduled to be launched on the Joint Polar Satellite System (JPSS)-2 spacecraft in 2022, only the ALTIUS (Atmospheric Limb Tracker for Investigation of the Upcoming Stratosphere) mission currently under development by BIRA as a potential component of the ESA Earth Watch Programme may deliver vertically resolved measurements of stratospheric water vapor in the future. The results of this study underscore the critical need for continued monitoring of vertically resolved profiles of both ozone and water vapor to detect and understand variability and trends.