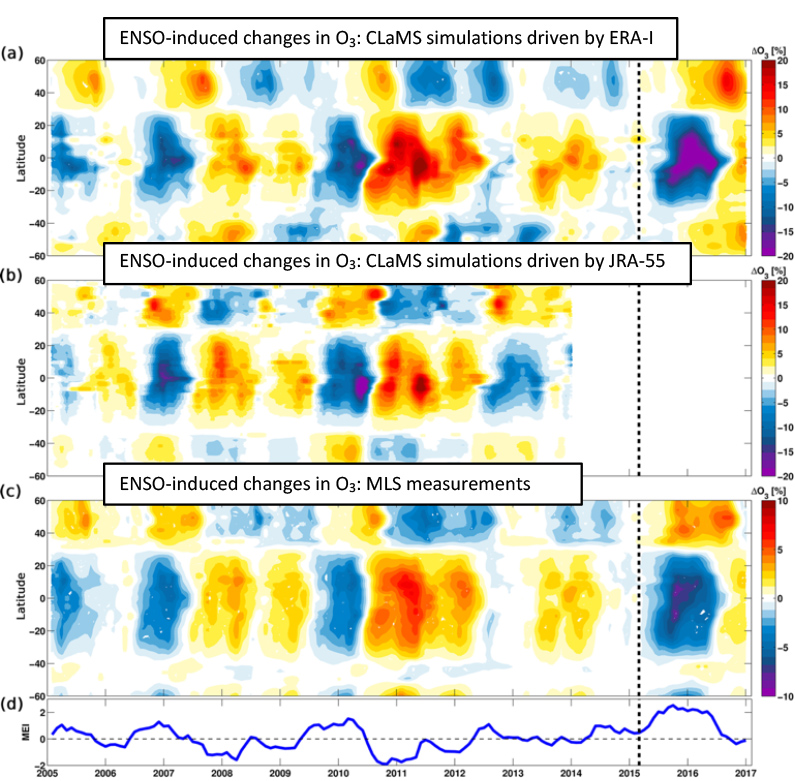 The global meridional overturning of mass in the stratosphere, generally known as the Brewer-Dobson circulation (BDC), plays a crucial role in Earth’s climate system by controlling the distributions of atmospheric constituents. The El Niño–Southern Oscillation (ENSO) is a major mode of climate variability that affects the BDC.

Monthly mean ozone anomalies over the period 2005–2016 from the Aura Microwave Limb Sounder (MLS) and Lagrangian model simulations driven by two meteorological reanalyses are analyzed using a multiple regression model to elucidate the impact of ENSO on the BDC. The patterns of ENSO-induced variations in lower stratospheric ozone (negative in El Niño years, positive in La Niña years) seen in MLS data agree well with those from both model runs.

Regression analysis of various model diagnostics of the circulation strength reveals structural changes in the lower stratospheric branches of the BDC, with a weakening of the “transition” branch (~370–420 K) and a strengthening of the “shallow” branch (~420–500 K) during El Niño, and opposite changes during La Niña.

Figure 2 of above reference. Latitude/time evolution of the ENSO impact on lower stratospheric O3 from (a) CLaMS simulations driven by ERA-I, (b) CLaMS simulations driven by JRA-55, and (c) MLS observations, in percent change from the monthly zonal mean climatology derived from the multiple regression fit and averaged between 380 and 425 K for the 2005–2016 period. Note the factor of two difference in the color scales in (a) and (b) versus (c), reflecting differences in the magnitude of the deseasonalized O3 mixing ratios between CLaMS and MLS that arise from model deficiencies. Panel (d) shows the multivariate ENSO index (MEI) in blue. The vertical black dashed line indicates the onset of a warm El Niño event in February 2015 that produced an extremely large negative O3 anomaly in the tropical lower stratosphere.

The structural changes in stratospheric circulation associated with ENSO found in this study affect the distributions of radiatively active trace gases in the UTLS, which, in turn, impact the global radiation budget. Hence, the ENSO influence on the BDC provides a pathway for stratospheric influence on future climate. Since climate change is expected to increase the frequency of El Niño-like conditions in the future, the ENSO effect on the BDC will become increasingly important in determining UTLS trace gas distributions. Thus the results of this study underscore the critical need for continued monitoring of vertically resolved profiles of ozone (and other radiatively important trace gases) to detect and understand variability and trends. In addition to the continuing record from Aura MLS and other current sensors, vertically resolved limb measurements of O3 will be available from the planned Ozone Mapper and Profiler Suite Limb Profiler (OMPS-LP) scheduled to be launched on Joint Polar Satellite System (JPSS)-2 in 2022.