The importance of accounting for the free tropospheric Nitrogen Dioxide background 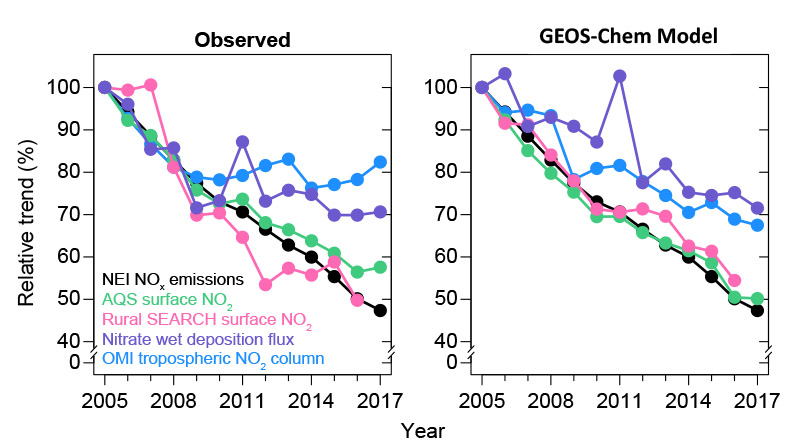 • We show that the steady decrease of NOx emissions reported by the NEI is in fact largely consistent with observed network trends of surface NO2 and ozone concentrations, and consistent with chemical transport modeling using GEOS-Chem.

• The post-2009 flattening of the OMI NO2 trend is instead due to the increasing relative importance of the non-anthropogenic NO2 background, rather than a flattening of US NOx emissions.

• Better understanding is needed of factors controlling free tropospheric NO2 in order to relate satellite observations of tropospheric NO2 columns to underlying NOx emissions and their trends.

Relative trends since 2005 of NEI NOx emissions, OMI tropospheric NO2 columns, surface NO2 concentrations, and nitrate wet deposition fluxes averaged over the contiguous US. The left panel shows observations for sites with continuous annual records for 2005-2017 (2016 for SEARCH) and the right panel shows the GEOS-Chem model values sampled at the corresponding sites. NEI NOx emissions are the same in both panels.

Following increasingly stringent emission controls targeted at improving air quality since the early 2000s, the EPA NEI reports a steady decrease in US fuel combustion emissions of nitrogen oxides (NOx) over the 2005-2017 period. Tropospheric NO2 columns over the US observed by OMI, presumed to be a proxy for NOx emissions if most most of the information in the NO2 tropospheric column originates from the boundary layer, show a leveling off after 2009, leading to the suggestion that the NEI emission trend is in error and that related air quality gains have halted.

Here we conduct a comprehensive analysis of 2005-2017 trends in US NOx emissions by using the GEOS-Chem chemical transport model to concurrently interpret the trends observed in OMI NO2 columns, nitrogen wet deposition fluxes, and surface observations of NO2 and ozone. We show the flattening of the OMI NO2 trend is in fact not inconsistent with the sustained decrease in NOx emissions reported by the NEI and that the NEI emission trend is consistent with other atmospheric observations of NOx and ozone trends. Our results demonstrate the importance of accounting for the free tropospheric NO2 background when using satellite observations of NO2 columns to infer NOx emissions and their trends. The concern is minor in highly polluted areas where NOx emissions are sufficiently high to dominate over the background influence. In the US, however, NOx emissions have now decreased to the point that NO2 columns over non-urban areas are mostly contributed by the free tropospheric background. Accounting for this poorly understood background will become increasingly important as NOx emissions continue to decrease in the developed world, and in tropical regions that are undergoing rapid development but have a deep troposphere and intense lightning. The upcoming TEMPO mission will need to properly account for free tropospheric NO2 in their retrieval and will be able to leverage the cloud-slicing technique developed for OMI to separate boundary layer and free tropospheric NO2 with higher spatial and temporal resolution.