Though the native resolution of the European Space Agency’s TROPOspheric Monitoring Instrument (TROPOMI) is finer than Aura's Ozone Monitoring Instrument (OMI), it is still not fine enough for many research applications. In addition, the TROPOMI data record is only 2 years long as compared to OMI’s 15 years. Over the last few years, a number of researchers have applied various techniques (e.g., land-use regression models) to create finer-scale Aura OMI NO2 data for use in research. Two recent studies are highlighted here.

NO2 remains an important traffic-related pollutant associated with both short- and long-term health effects. de Hoogh et al. conducted one of the first studies showing the potential of using earth observation data to develop robust models with fine-scale spatial (100 × 100 m2) and temporal (daily) variation of NO2 across Switzerland from 2005 to 2016. The novelty of this study is in demonstrating that methods originally developed for particulate matter can also successfully be applied to NO2. The predicted NO2 concentrations will be made available to facilitate health research in Switzerland. 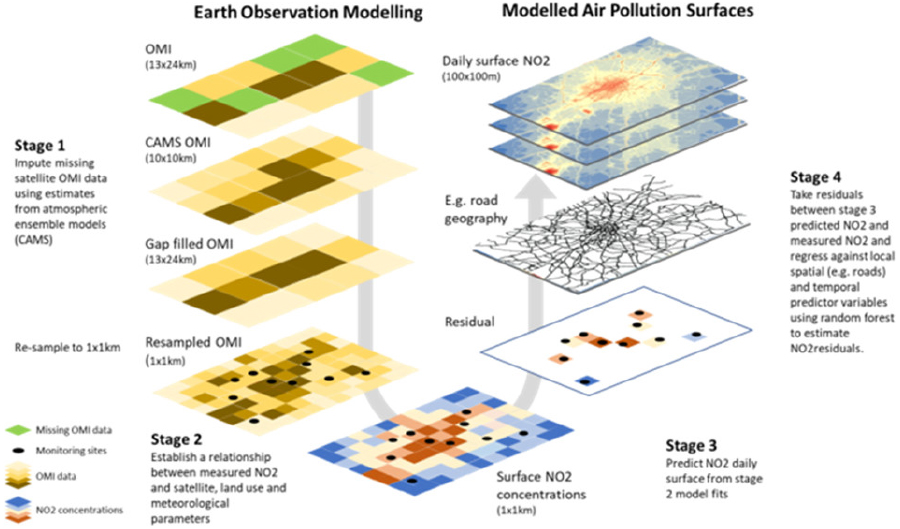 The spatial distributions of the fine-scale reconstructed OMI NO2 VCDs over South Korean obtained by applying the spatial-weight kernels from two AQ models: (a) WRF-Chem and (b) WRF/CMAQ.