A shifting lifetime for nitrogen oxides

Those abundances depend not only on nitrogen oxide (NOx) production rates but also on their lifetimes (τ). Laughner and Cohen report that changes in urban NOx lifetimes can be measured directly from satellite observations of nitrogen dioxide (NO2). They used data on 28 North American cities to show how NOx lifetimes there changed between 2005 and 2014.

Accounting for this change in lifetime should help to reconcile conflicting trends between bottom-up and top-down emissions estimates. 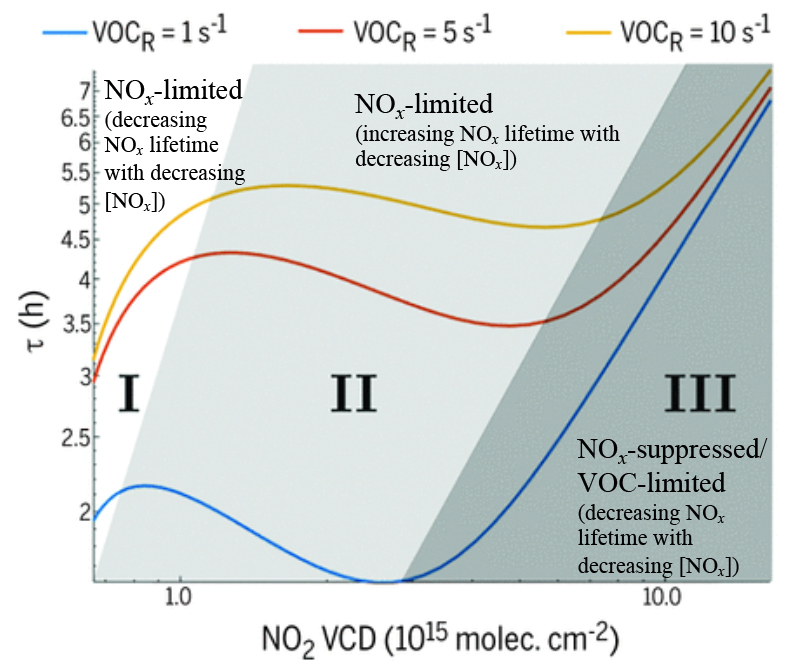 A theoretical model for the relationship between nitrogen oxide lifetime and concentration.

Theoretical Calculation of the Dependence of NOx lifetime (τ) on [NOx], assuming steady state for the hydrogen oxide radicals (HOx) family. The model predicts the sign of dτ/dNOx changes at different NOx concentrations. 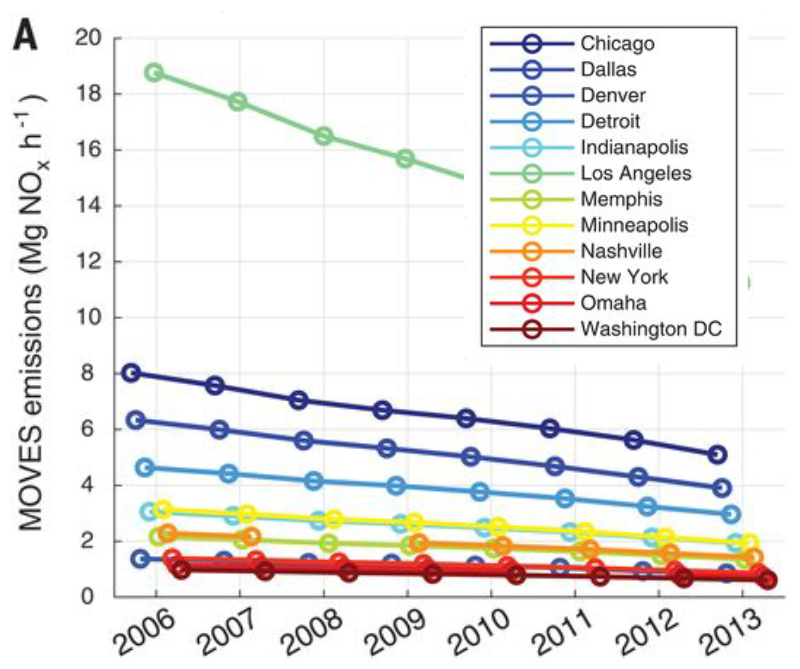 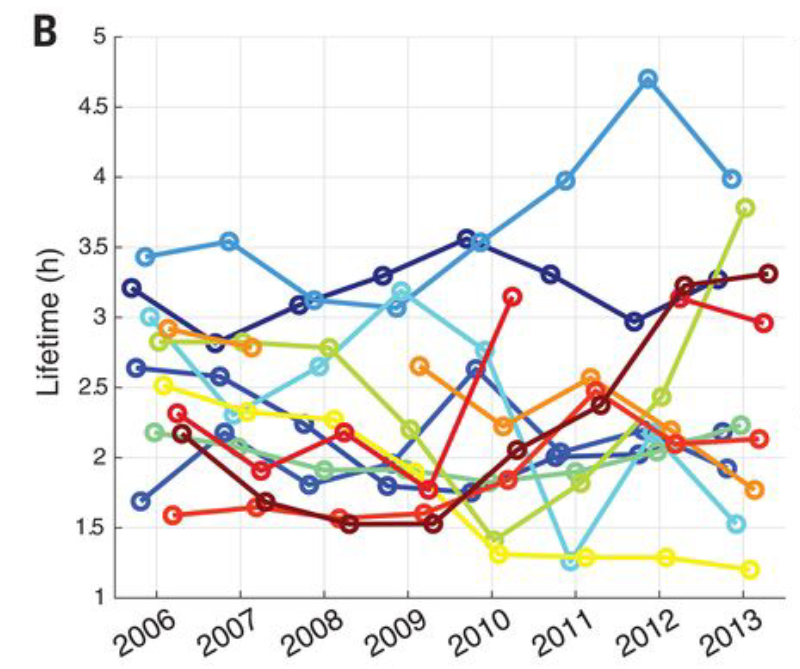 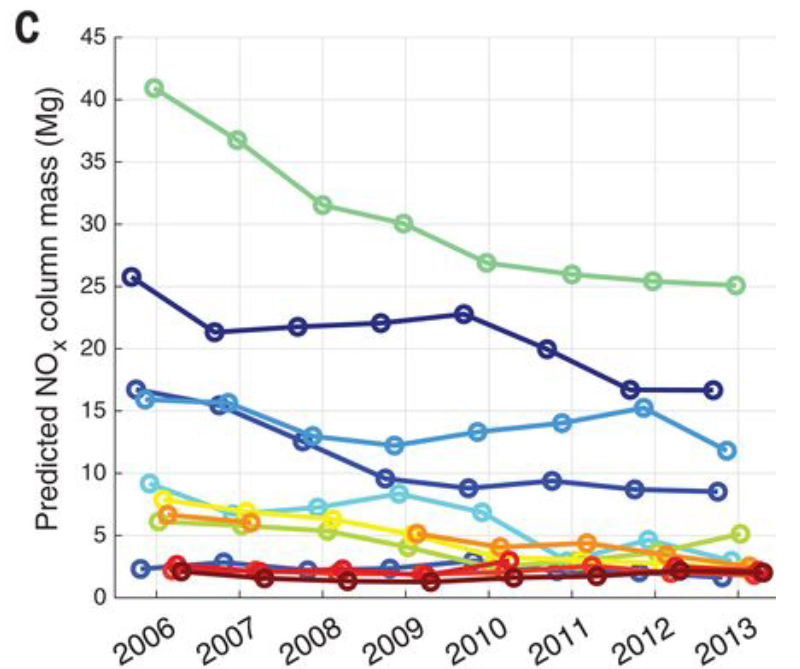 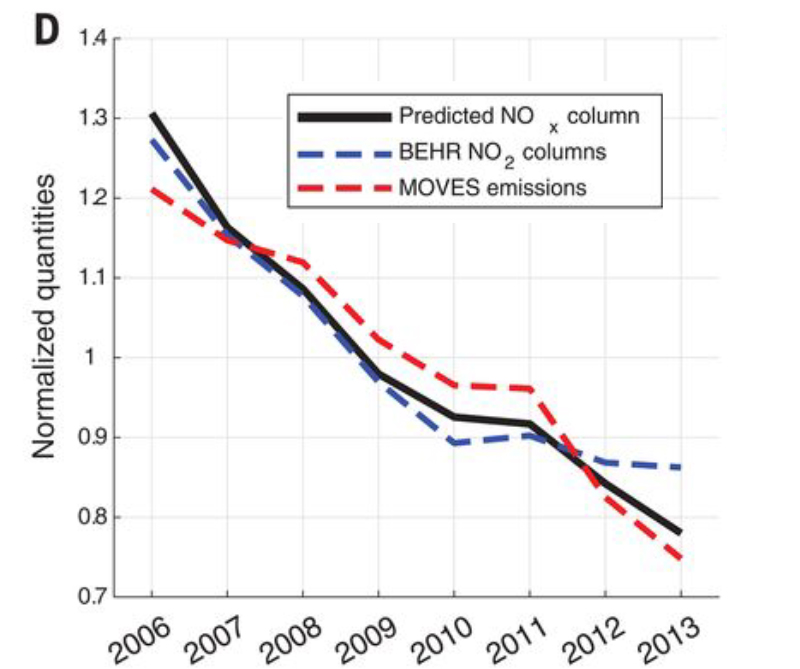 Trends in lifetime for 12 cities (B) show different trends in time consistent with the model above. The increases in lifetime after 2010 offset the decrease in emissions, leading to a pause in observed and predicted decrease of NOx columns.

NOx lifetime relates nonlinearly to its own concentration; therefore, by observing how NOx lifetime changes with changes in its concentration, inferences can be made about the dominant chemistry occurring in an urban plume. We used satellite observations of NO2 from a new high-resolution product to show that NOx lifetime in approximately 30 North American cities has changed between 2005 and 2014 in a manner consistent with our understanding of NOx chemistry.

We saw significant changes in NOx lifetime in North American cities that are of the same order as changes in NOx emissions over the same time periods. The pattern of these changes suggests that NOx-limited chemistry dominates North American urban plumes and also demonstrates that the change in NOx lifetime must be accounted for when relating NOx emissions and concentrations. Fully understanding the factors driving NOx lifetime after 2010 will require new techniques. Given the importance of changing NOx lifetime shown here, we hope that this work will spur other groups to pursue independent corroboration of these changes in lifetime through various methods, including high-resolution modeling efforts, meta-analyses of aircraft and ground-based data, and new, higher-resolution satellite products. The higher spatial resolution of TROPOMI (Tropospheric Monitoring Instrument) and the upcoming geostationary NASA Tropospheric Emissions: Monitoring Pollution (TEMPO) mission will provide more information on whether NOx concentrations near sources are continuing to decrease and therefore driving NOx lifetime changes, even though the average NO2 columns are unchanging after 2010. High-resolution HCHO retrievals will improve our ability to track urban VOC chemistry from space and therefore infer changes in VOCR relative to changes in NOx.

This work also suggests that space-based observations of NOx lifetime could provide valuable information about how the oxidative capacity of the atmosphere in North American cities changes over time. Previous work used NOx lifetime measured from space to infer plume-average Hydroxide (OH) concentrations; however, that work focused on the megacity Riyadh, where loss of NOx to nitric acid is the only meaningful loss pathway. By contrast, our work suggests that U.S. cities do have important alkyl nitrate chemistry. New methods will need to be developed to correctly account for the partitioning of loss NOx between alkyl nitrates and nitric acid in order to take full advantage of this capability.

We used version 3.0B of the Berkeley High Resolution (BEHR) NO2 product to directly observe NOx lifetime in ~30 North American cities. The BEHR product, with high-resolution daily NO2 a priori profiles, was necessary to this study because previous work has shown that daily, high-resolution profiles are necessary to simultaneously retrieve NO2 vertical column densities (VCDs) and lifetimes to accuracies of 30% or better. We show that there are observable changes in North American urban NOx lifetime and that these changes suggest a transition from the NOx-suppressed to NOx-limited regime. We examined the implications for ozone production and the relationship between trends in NOx emissions and NO2 VCDs.

To calculate the effective lifetime in each city’s NOx plume, we computed line densities along the downwind direction averaged over April through September in 3-year periods. Throughout this work, we refer to these periods by the middle year; for example, “2006” represents results from April to September in 2005, 2006, and 2007. We focused on weekday (defined as Tuesday through Friday) lifetimes because the greater weekday NOx emissions owing to heavy truck traffic mean weekday lifetime will have a greater effect on NOx concentration and therefore air quality.