Transport of pollutants and water vapor to the stratosphere by the Asian (ASM) and North American (NASM) summer monsoon circulations affects global atmospheric composition and climate. 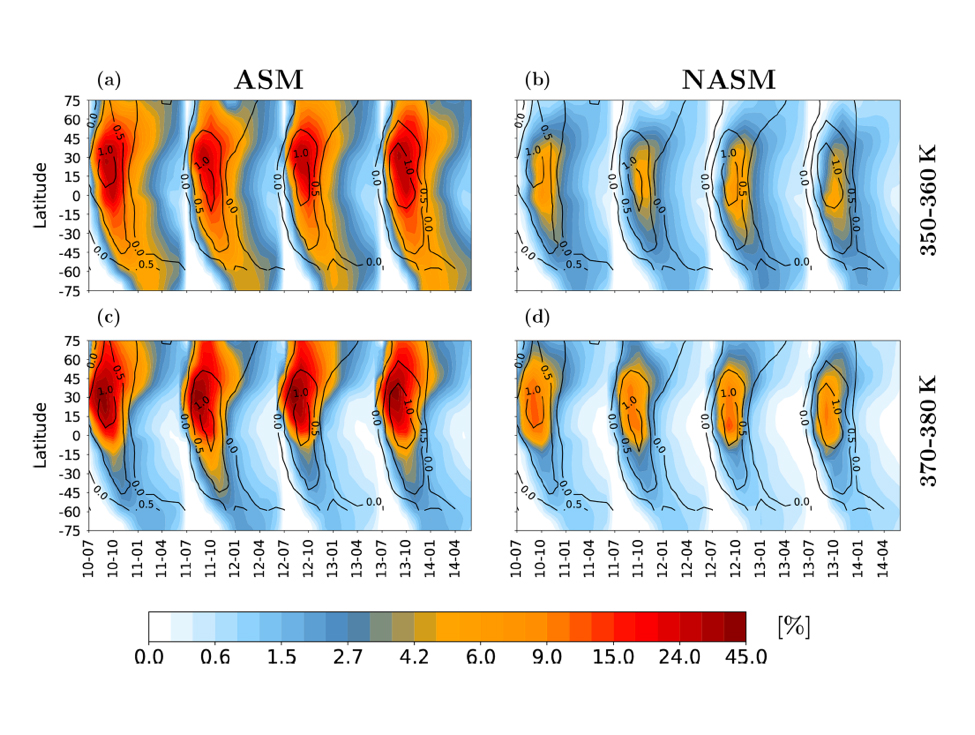 This work investigates the pathways and efficiency of the transport of air masses to the stratosphere and quantifies the relative influence of the ASM and NASM using a Lagrangian chemistry transport model.


Artificial tracers are released in the two monsoon source regions during July and August of 2010–2013 and tracked until the following summer. Two pathways from the upper troposphere over the ASM / NASM regions are found: (i) horizontal transport to the tropics below the tropopause, followed by ascent to the stratosphere via tropical upwelling, and (ii) ascent to the lower stratosphere within the monsoon anticyclone, followed by horizontal transport to the tropics. The tropical pathway (i) is faster than the monsoon pathway (ii).

The air mass contribution to the tropical pipe from the ASM is comparable to that directly from the inner tropics and about three times larger than that from the NASM. Peak values of the simulated ASM and NASM tracers correlate well with the “wet” phases of the vertical and horizontal water vapor “tape recorder” signatures evident in Aura Microwave Limb Sounder (MLS) H2 measurements.

This study confirms the important role of monsoon regions in moistening the lower stratosphere in boreal summer.

The circulations associated with the Asian and North American summer monsoons transport large quantities of water vapor and surface pollutants into the lower stratosphere and profoundly affect atmospheric composition and climate both locally and globally. Although transport to the UTLS via the ASM has been well studied in recent years, the impact of the NASM has received comparatively less attention. This study quantitatively addresses three questions of scientific and societal significance: (1) How does transport from the ASM and NASM regions affect stratospheric composition? (2) How large are contributions from the ASM and NASM regions to the stratosphere relative to contributions from the inner tropics? (3) From which levels within the ASM and NASM regions do the most effective transport pathways to the stratosphere originate? Although the Swedish Stratospheric Inferred Winds (SIW) satellite scheduled for launch in 2022 will measure profiles of H2, no concrete plans for future measurements of the other constituents of relevance for the summer monsoons used in this study (CO and HCN) currently exist.

Simulations from the Chemical Lagrangian Model of the Stratosphere (CLaMS), driven by both ERA-Interim and MERRA-2 reanalyses, are available from the first author upon request. Atmospheric Chemistry Experiment Fourier Transform Spectrometer (ACE-FTS) version 3.6 measurements of HCN are available at http://www.ace.uwaterloo.ca/data.php. Aura Microwave Limb Sounder (MLS) version 4.2 measurements of CO and H2 are available at http://disc.sci.gsfc.nasa.gov/Aura/dataholdings/MLS/index.shtml.