The dominant source of odd nitrogen (NOx, NO+NO2) in the polar stratosphere is the oxidation of Nitrous Oxide (N2 O carried upward and poleward from the tropical troposphere by the large-scale circulation. The magnitude of this N2 transport is influenced by the phase of the quasi-biennial oscillation (QBO) in tropical stratospheric winds. In addition, energetic particle precipitation (EPP) – the flux of charged solar particles into Earth’s atmosphere – can drive large enhancements in NOx in the polar regions. NOx is a catalyst for chemical ozone destruction.

Aura Microwave Limb Sounder (MLS) measurements have previously shown that the easterly phase of the QBO is associated with increases in N2 in the Antarctic stratosphere at 24–33 km altitude in September [Strahan et al., 2015]. At this time of year, this layer in the atmosphere is also influenced by downward transport of EPP-affected mesospheric air. Here, Gordon et al. [2020] provide new evidence of the EPP contribution to Antarctic stratospheric NOx column in late spring based on Aura Ozone Monitoring Instrument (OMI) NO2 observations. They show that QBO effects mask the stratospheric EPP-NOx signal; taking the phase of the QBO into account reveals a strong correlation between column NO2 and EPP throughout Antarctic spring, especially in easterly QBO years. Column NO2 amounts are consistently lower when the QBO is westerly. MLS measurements of temperature show that the Antarctic stratosphere is also colder (by up to 4 K) in westerly QBO years. Lower temperatures increase the formation of polar stratospheric clouds; as the particles sediment, they remove HNO3. Thus stratospheric MLS HNO3 abundances are as much as 1 ppbv lower with westerly QBO.

As stratospheric chlorine levels decline in response to the Montreal Protocol, EPP-NOx contributions to Antarctic ozone destruction need to be considered in predictions of ozone layer recovery. 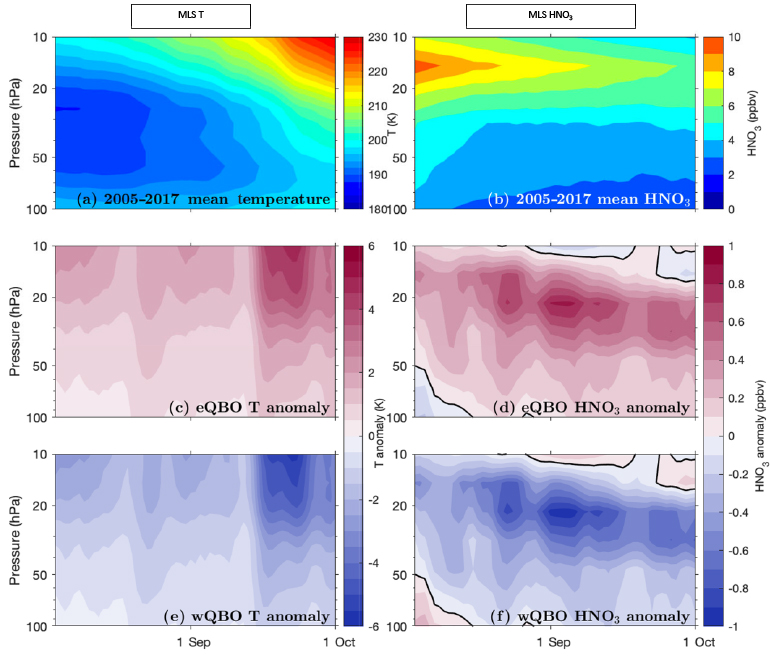 Scientific significance, societal relevance, and relationships to future missions:
This paper capitalizes on the long Aura data record to investigate EPP as a source of NOx variability in the Antarctic late winter and spring and the extent to which the phase of the QBO affects the contribution of EPP-induced NOx enhancements. It is one of the few studies to use OMI stratospheric column NO2 observations, which cover ~15–35 km, where NO2 constitutes ~80% of total NOx during daytime. NOx plays important roles in stratospheric chemistry, catalytically destroying ozone and also curtailing ozone loss through deactivation of active chlorine (ClO + NO2 --> ClONO2). The phase of the QBO may affect the stratospheric column NO2 through a combination of factors. For example, greater transport of N2 to the polar region in eQBO years leads to larger background NOx abundances. MLS measurements were central to the analysis that elucidated the link between the QBO and N2 anomalies in the following Antarctic winter [Strahan et al., 2015]. In addition, the polar vortex is warmer during winters with eQBO. Gordon et al. [2020] speculate that higher temperatures in late winter may lessen polar stratospheric cloud activity and thus denitrification (the permanent removal of HNO3 from the lower stratosphere as cloud particles sediment to lower altitudes). With weaker denitrification, more gas-phase HNO3 is available to photolyze and release NO2. The MLS temperature and HNO3 measurements show behavior consistent with this picture. No concrete plans for future measurements of stratospheric gas-phase HNO3 (by NASA or other agencies) currently exist.