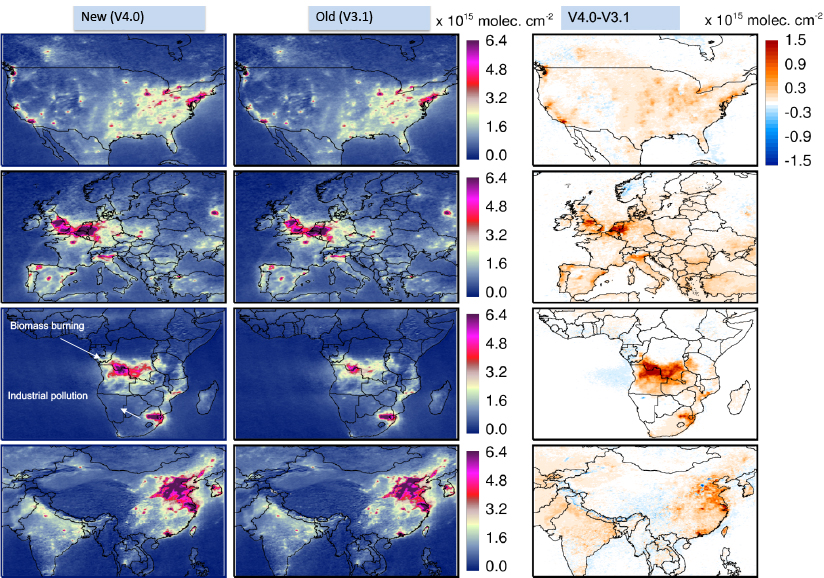 The seasonal (June-July-August, 2005) mean cloud-free tropospheric NO2 column data demonstrate that the updates implemented in the new OMI NO2 algorithm yield 10-40% higher columns over polluted regions that are in improved agreement with independent observations.

Scientific significance, societal relevance, and relationships to future missions:
The NASA standard nitrogen dioxide (NO2) version 4.0 product for OMI Aura incorporates the most salient improvements and enhances the NO2 data quality in several ways. The retrieval algorithm is based on a conceptually new, geometry-dependent surface Lambertian equivalent reflectivity (GLER) data that are available on an OMI pixel basis. The GLER product is calculated using the VLIDORT model, which uses as input high resolution bidirectional reflectance distribution function (BRDF) information from Aqua MODIS instruments over land and the wind-dependent Cox–Munk wave-facet slope distribution over water, the latter with contribution from the water-leaving radiance. The GLER combined with consistently retrieved oxygen dimer (O2-O2) absorption-based cloud fractions and pressures provide high-quality data inputs to the new NO2 retrieval scheme. The updates implemented in V4.0 yield higher (∼10–40%) tropospheric NO2 columns in polluted areas, with less-pronounced (10%) differences in background and low-column areas. While the updates are found to have less impact on studies focusing on trend, we anticipate that the improved NO2 data record will be beneficial for studies related to emission estimates of nitrogen oxides (NOx) and co-emitted gases such as carbon dioxide (CO2).

The algorithms developed for OMI are being implemented for other similar past and currently operating satellite spectrometers, and serve as foundation for future instruments, including geostationary instruments, such as TEMPO. The algorithms currently applied for NO2 retrievals can be applied to improve retrievals of other species such as formaldehyde, sulfur dioxide, and ozone.