Tropospheric nitrogen dioxide (NO2) indicates economic activities, as NO2 is primarily emitted from fossil fuel consumption.

We evaluated the reduction in satellite measurements of NO2 tropospheric vertical column densities (TVCD) before and after the Lunar New Year (LNY). The observed reduction in 2020 is ~20% larger than the typical holiday-related reduction.

We relate to this reduction to two of the government’s actions: the announcement of the first report in each province and the date of a province’s lockdown. Both actions are associated with nearly the same magnitude of reductions. 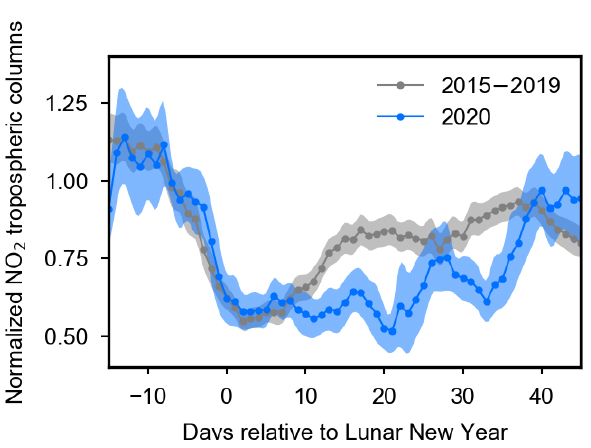 Figure B : Daily variations in 7-day moving averages of OMI NO2 TVCDs over China. Shading shows standard error of the mean. Values are normalized to the mean of the period of -20 to -1 days relative to Lunar New Year.


Technical description of figure:
Consistent with the 2015–2019 data, the 2020 NO2 TVCD 7-day moving averages show a significant reduction during approximately the two weeks leading up to LNY and reach a minimum around LNY, consistent with the gradual shutdown of factories before the holiday. In prior years, a rebound of NO2 TVCD usually begins around 7 days after LNY, marking the end of the holiday season. However, while the 2020 data show similar initial declines in the week leading up to LNY, we do not observe the typical uptick in NO2 TVCDs starting the week after the LNY as in previous years . OMI (and TROPOMI) NO2 TVCDs show a longer period of low values near the minimum.

Scientific significance, societal relevance, and relationships to future missions:
We use two instruments (OMI and TROPOMI) to investigate the reductions in NO2 TVCDs over China after the outbreak of COVID-19. We use Goddard Earth Observing System coupled to the NASA Global Modeling Initiative (GEOS-GMI) model simulations with constant emissions to rule out the possibility that the large NO2 TVCD decreases observed in 2020 are driven by changes in the meteorological conditions. We next explore how COVID-19 policy interventions are associated with reductions in NO2 TVCD. Our results suggest that the announcement of the first case was followed by a reduction in NO2, with a further reduction following the actual lockdown. Examining this unusual period has provided a scenario of a society that has substantially lowered fossil fuel usage including mobility associated with these fuels.

Data Sources:
Satellite-derived emission estimates are based on NO2 measurements from the Aura Ozone Monitoring Instrument (OMI) and the Tropospheric Monitoring Instrument (TROPOMI). OMI is a Dutch–Finnish contribution to the NASA Aura mission. TROPOMI is on board the European Copernicus Sentinel-5 Precursor satellite.