Air Quality Measurements from OMI during the 2020 U.S. Wildfire Season

Unprecedented amounts of pollution were produced by multiple fires over the USA west coast in September 2020. Continental scale smoke plumes from these wildfires were observed by the Ozone Monitoring Instrument (OMI) on the Aura satellite for about five weeks since the onset of the fires in early September.

The intensity of the 2020 Pacific Northwest wildfire season has no precedent in this century, and it is only comparable to hemispheric scale megafires over thirty years ago such as the 1987 Yellowstone Park fires and the 1988 Great China Fire . Although the 2020 US west coast wildfire season was significantly more intense than in recent years, it is consistent with an increasing trend in fire frequency and intensity in this region observed over the last few years. In addition to casualties and economic losses, as well as deterioration of air quality in the vicinity of the fires, smoke plumes associated with fires in the Pacific Northwest have been found to reach the lower stratosphere where the residence time of carbonaceous aerosol particles is significantly longer, likely resulting in climate effects. 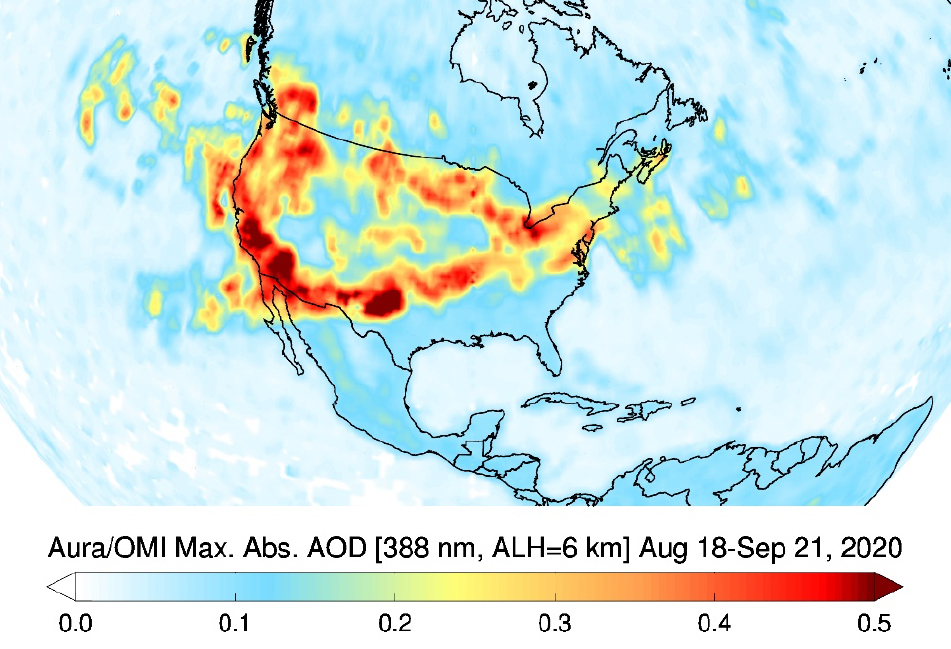 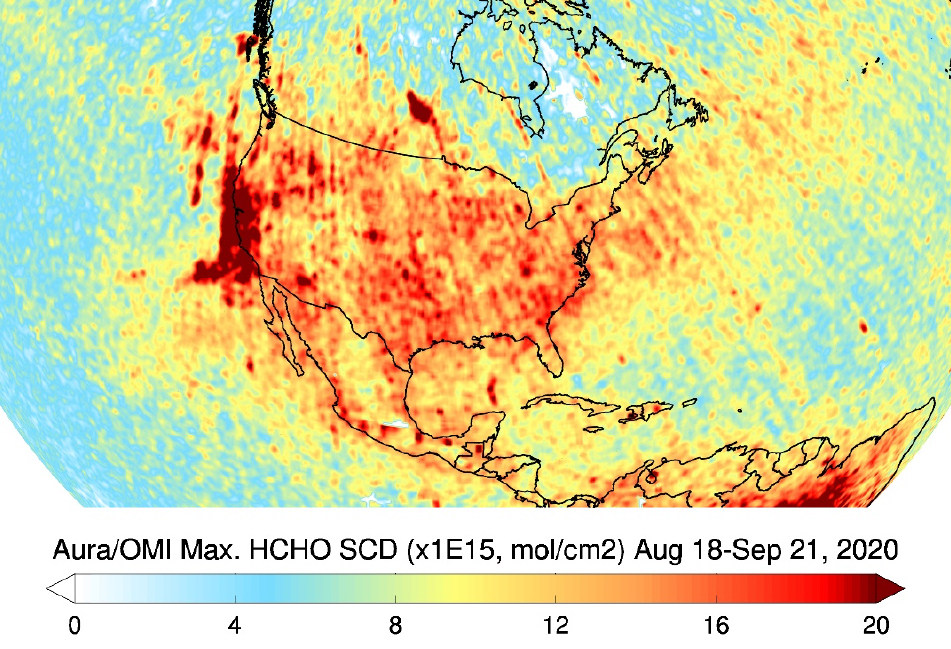 Satellite observations between August 18 and September 21, 2020 by the Aura OMI instrument show the spatial extent of the hemispheric scale smoke plume generated by fires in the US west coast in terms of retrieved 388 nm Aerosol Absorption Optical Depth (AAOD, left) and maximal formaldehyde (HCHO, right) slant column densities (SCDs). There are similarities and differences in the spatial distribution between aerosols and HCHO, as HCHO comes from both fire emissions and also biogenic emissions particularly over the southeastern U.S. Additionally, HCHO is also short-lived and the loading tends to be greater within fresh fire plumes and lower in aged plumes.


Technical description of figure:
The two figures show the spatial extent of multiple smoke plumes from fires in the US west coast between August 18 and September 21. The spread of the plumes covered, at least partially, almost the entire contiguous United States, except for Florida. It also reached northern Mexico, southern Canada and both the Pacific and Atlantic Oceans. The plume travelled across the Atlantic Ocean and was detected as far as northern Europe.

(left) This figure shows the spatial distribution of retrieved aerosol absorption optical depth (AAOD). AAOD values larger than 0.5 correspond to aerosol layers of total extinction optical depth larger than 5. The transformation from UV Aerosol Index (UVAI; not shown) to AAOD requires information on aerosol layer height (ALH), which for this event has been assumed 6 km based in space-borne lidar observations. UVAI is qualitative and calculated from measured 354 nm and 388 nm radiances. The UVAI’s magnitude is an indicator of the total amount of smoke particles in the atmosphere as well as of the height of the aerosol layer above the surface.

(right) Maximal OMI retrieved formaldehyde (HCHO) slant column densities (SCDs) during August 18 to September, 2020 showing fire emissions over the U.S. west coast and long-range transport to the east. There are similarities and differences in the spatial distribution between aerosols and HCHO, as HCHO comes from both fire emissions and also biogenic emissions particularly over the southeastern U.S. Additionally, HCHO is also short-lived and the loading tends to be greater within fresh fire plumes and lower in aged plumes.