Understanding the processes that control stratospheric water vapor, as well as the causes of observed stratospheric humidity variations, is the focus of active scientific research. In particular the impact of deep convection, which can loft ice particles directly into the lowermost stratosphere, remains an open question. These convective events can yield significant humidity enhancements after the ice particles sublimate.

MLS retrievals of water vapor mixing ratios are used to illustrate that humidity outliers in the upper troposphere and lower stratosphere preferably occur in the extratropics, especially over North America and the Asian monsoon region. This is confirmed by an extensive set of in situ observations from balloon and airborne instruments. By relating the altitude of observed outlier events to the altitude of the cold-point tropopause from ERA-5 reanalysis fields, Jensen et al. report that a majority of the anomalously high water vapor measurements over North America are found above the tropopause.

Conversely, most outlier events over the Asian monsoon region are sampled below the tropopause. The in situ dataset shows that convective overshoots in the tropics only rarely occur, and that the humidity enhancements are modest. The lack of any tropical humidity outliers in the MLS data set is related to the comparatively coarse vertical resolution of the MLS sampling.

This study indicates that direct convective hydration primarily occurs over the North American continent during the summertime monsoon. 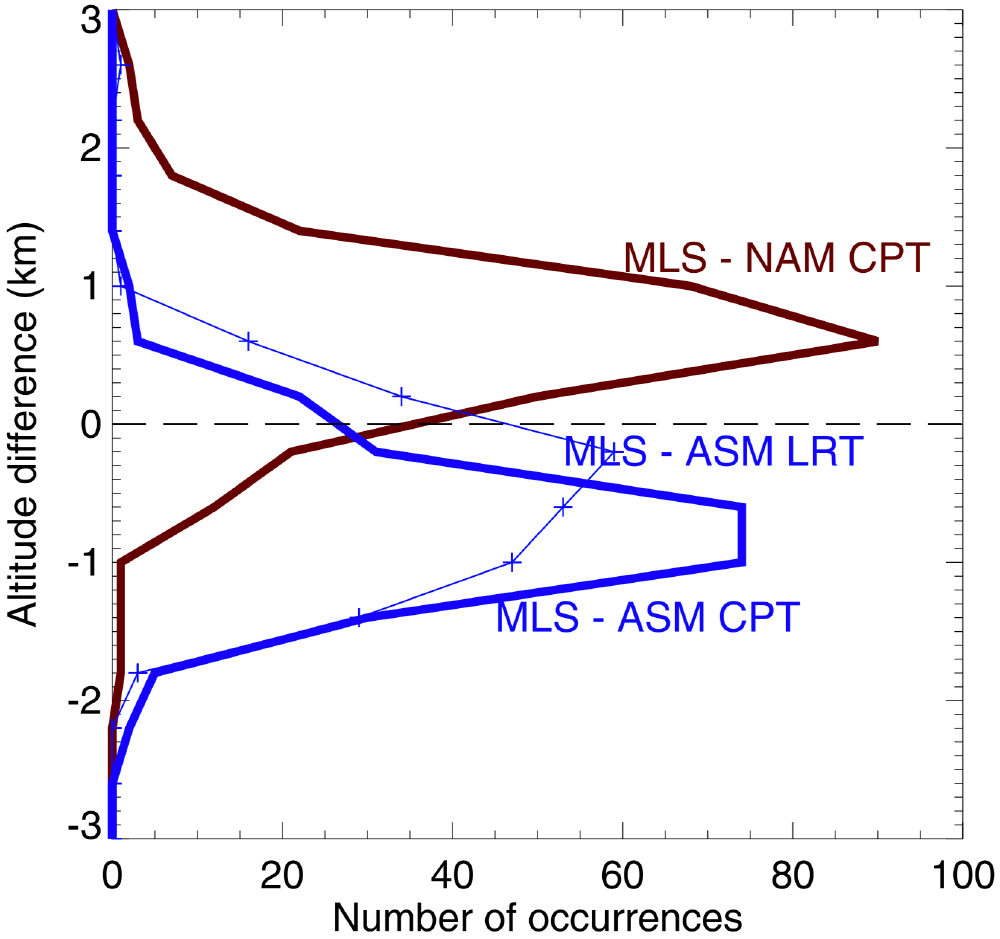 The altitude differences between MLS-observed water vapor mixing ratio outliers and the position of the tropopause from ERA-5 reanalysis fields (based on different definitions). The maroon line indicates the altitude difference for all anomalous humidity observations with mixing ratios above 8 ppmv sampled over North America during the summertime monsoon season (NAM). Similarly, the thick blue line indicates such observations sampled over the Asian monsoon region (ASM). For both distributions the reference altitude is provided by the cold-point tropopause (CPT). The thin blue line indicates the ASM distribution if the reference altitude is given by the lapse-rate tropopause (LRT), which is slightly lower than the CPT.

Daily near-global observations of upper tropospheric and lower stratospheric water vapor from the Microwave Limb Sounder (MLS) instrument on NASA’s Aura spacecraft are essential for validating the impact of direct and indirect convective hydration, both in terms of geographical distribution and the temporal evolution of water vapor distributions. There are currently no plans from any agency for a new instrument to extend the over 16-year spaceborne daily near-global MLS record of water vapor observations in the upper troposphere and lower stratosphere.

The MLS retrievals of water vapor mixing ratio are available from GES DISC (10.5067/Aura/MLS/DATA2009). The NASA airborne measurements of temperature, pressure, and water vapor from the ATTREX and POSIDON campaigns are available at https://espoarchive.nasa.gov/archive/browse/attrex and https://espoarchive.nasa.gov/archive/browse/posidon, respectively. The Ticosonde water vapor soundings are available at https://acd-ext.gsfc.nasa.gov/Projects/Ticosonde/index.html. The SOWER data can be obtained at http://sower.ees.hokudai.ac.jp/data.html.