An extraordinary complex of Australian fire-driven pyrocumulonimbus (pyroCb) storms at the end of 2019 (the most recent and largest of three such events in the Aura Microwave Limb Sounder, MLS, record) produced an unprecedented stratospheric plume of fire emissions that circled the globe twice while rising to 5.6 hPa (35 km) over 110 days.

The plume was characterized by unprecedented enhancements of MLS H2O and biomass-burning products (CO, HCN, CH3Cl, CH3CN, and CH3OH) accompanied by depressions in stratospheric species (O3 and HNO3). The densest part of the plume rose through the lower/middle stratosphere, with solar heating of smoke both driving the ascent and producing a ~1000 km wide anticyclonic vortex that served to confine the plume. Fragments drawn off the plume's southern edge moved poleward, but did not appear to penetrate the developing winter polar vortex, where they might have influenced ozone chemistry.

Analysis of correlations between constituent measurements requires consideration of their spatial resolutions. The apparent decay of some long-lived plume constituents is attributable to the coarsening spatial resolution of their measurement with height. Differing HCN/H2O signatures indicate that several early plumes originated from discrete stratospheric injection events.

Soot, water vapor, and combustion products injected by the Australian pyroCbs had a significant impact on lower and middle stratospheric composition. Such events are likely to become more common with climate change. 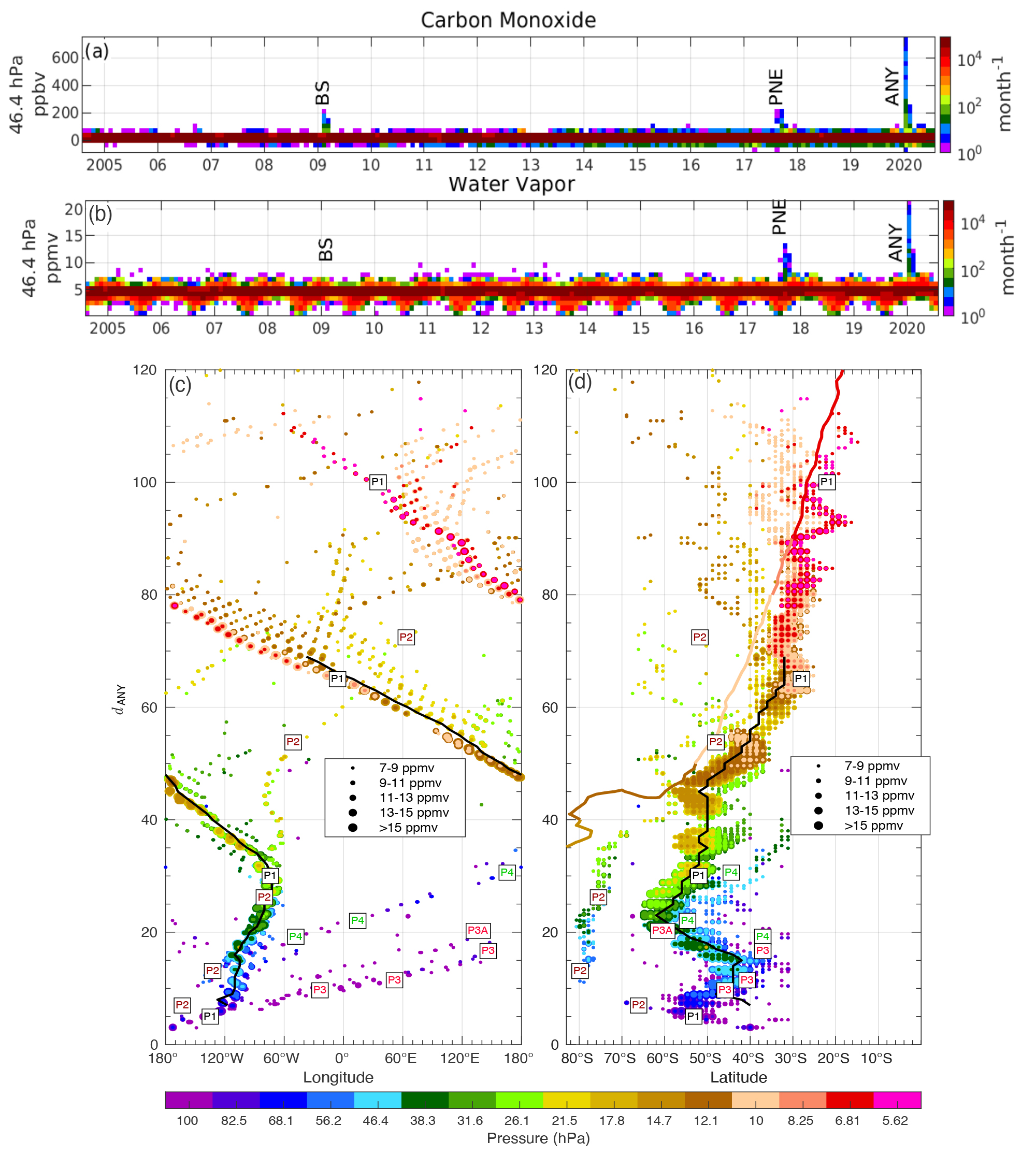 The Black Saturday (BS), Pacific Northwest Event (PNE) and Australian New Years (ANY) PyroCb plumes successively established MLS records for stratospheric mixing ratios of (a) CO and (b) H2O and several other biomass burning products. Multiple plumes can be traced by following the long-lived H2O anomalies in (c) time vs longitude and (d) time vs latitude.

(a) A histogram representing every 46.4 hPa carbon monoxide measurement in the 16-year, global MLS record shows mixing ratios from the Black Saturday (BS), Pacific Northwest Event (PNE) and Australian New Years (ANY) PyroCb events far exceeding any other observed mixing ratios, with CO injected above 215 hPa by ANY estimated to be ~4x that of PNE and ~8x that of BS. (b) A similar global histogram of 46.4 hPa H2O shows ANY mixing ratios greatly exceeding the previously singular PNE measurements. (c) and (d) show the evolution of the plumes in time vs. longitude and time vs. latitude, respectively. Here, color represents the pressure level of outlier H2O and dot size represents the mixing ratio. The densest plume (P1) moves to and remains near the tip of South America during the first ~35 days after the ANY event, then is caught in easterly flow, circling the globe twice while ascending to 5.6 hPa over 110 days. The black line shows the location of the anticyclone (from MERRA-2 reanalysis) associated with P1. The colored line on (d) show the latitude of the zonal wind reversal to westerlies at the height of P1. P1 remains just equatorward of the wind reversal, with material sheared off of its southern side moving eastward and poleward. P2 remains over Antarctica from 10–38 days after the nominal injection time, but doesn’t rise as quickly or as high as P1, and is eventually caught in westerly flow. Other smaller, less persistent plumes can be tracked during the first month after ANY.

This work demonstrates that pyroCb injections can have significant, hemisphere-wide impacts on the lower and middle stratosphere that can persist for months. The observed dynamical responses to the heating of smoke in the plume by absorbed solar radiation show how pyroCb plumes can penetrate deeply into the stratosphere, lessening the possibility that anomalies are locally confined and/or quickly flushed back into the troposphere. PyroCb injections are expected to increase in frequency and intensity with climate change. No concrete plans (by NASA or other agencies) for future height-resolved satellite measurements of lower stratospheric CO or other biomass burning tracers currently exist.