Recent studies have indicated that overshooting convective events (OCEs), which directly inject ice particles into the lowermost stratosphere, can substantially impact stratospheric water vapor concentrations. While OCEs are regularly observed during the North American summer monsoon, observations of large water vapor outliers are rare events. Thus, the connection between OCEs and humidity outliers is the focus of ongoing research.

By colocating 15 years of lower-stratospheric water vapor concentrations from the Aura Microwave Limb Sounder (MLS), cloud properties from GOES-R and Aqua-MODIS, and tropopause altitudes from MERRA-2 over North American, this study identifies key characteristics of OCEs that correlate with water vapor concentrations. A decrease in distance between MLS profiles and OCEs is observed for increasingly large concentrations, while the respective OCEs tend to cover an exponentially larger area. The largest humidity outlier, observed by MLS in August of 2019, was found directly above an OCE that covered the second largest area in the data record. A comparison between water vapor outliers sampled over 2005-2012 and 2013-2019 hints at a strengthening of the North American monsoon season in the last 7 years.

Increases in upper tropospheric and lower stratospheric water vapor have been shown to lead to substantial surface warming. Since OCEs have the potential to impact water vapor concentrations globally, the expected increase in convection in a warming climate may lead to a positive climate feedback. 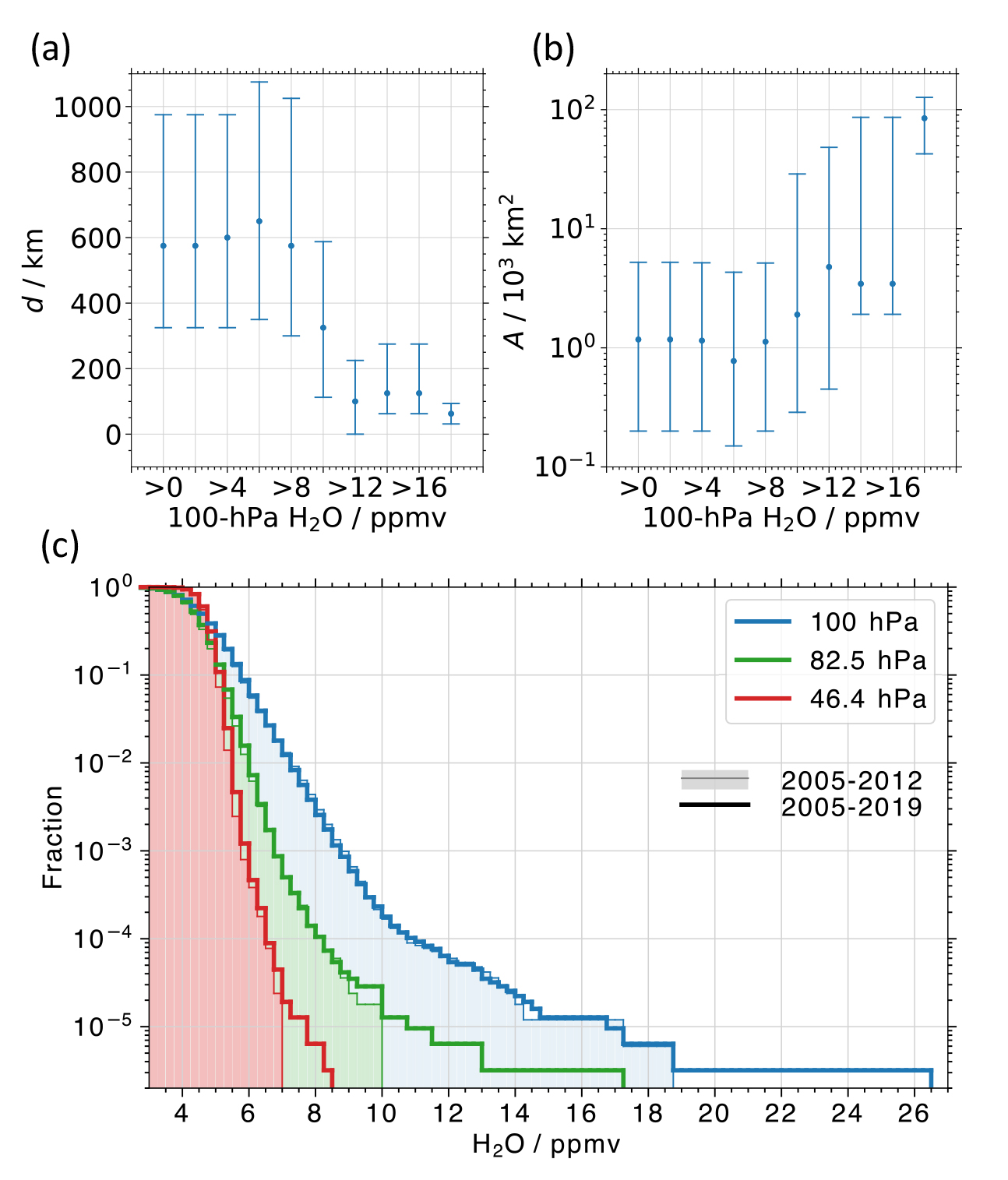 (a) Median (dots) and interquartile range (vertical bars) of the minimum distance between individual MLS profiles and MODIS observations of OCEs, as a function of minimum water vapor mixing ratio at 100 hPa. Data is from 2005-2019. (b) Similar to (a), but for the covered area of OCEs. (c) Probabilities that 100-46.4-hPa water vapor retrievals exceed a given mixing ratio over 2005-2012 (thin line and translucent shading) and 2005-2019 (thick lines).

Stratospheric water vapor not only impacts the atmospheric radiation budget, but also impacts stratospheric ozone concentrations. Therefore, it is essential to accurately describe the processes controlling upper tropospheric and stratospheric humidity for reliable long-term climate projections. This study provides insights into the relevant characteristics of overshooting convection that are connected to extreme enhancements in stratospheric humidity. These findings might prove useful for the upcoming NASA Earth Venture Suborbital mission DCOTSS, which will be conducted in the summer of 2021.

Daily near-global observations of upper tropospheric and lower stratospheric water vapor from the Microwave Limb Sounder (MLS) instrument on NASA’s Aura spacecraft are essential for observations of extreme outliers in stratospheric humidity. There is currently no NASA sensor planned to continue such observations. The planned Swedish SIW mission is expected to provide comparable measurements.