11 years of water vapor concentrations provided by the Aura Microwave Limb Sounder (MLS) are combined with ground-based radar observations of high convection over the contiguous United States, as well as 5-day backwards trajectories for individual MLS profiles. This data set shows that deep convection over North America is associated with an increase in lower-stratospheric water vapor concentrations of up to 1 parts per million, especially during July and August. The magnitude of the water vapor anomaly is mainly dependent on the location of the North American anticyclone and the frequency with which air masses encounter high convection. The geographical distribution of water vapor anomalies is not aligned with areas of frequent convection. Instead, convective moisture is transported to the region of high water vapor by the dynamics of the monsoon. 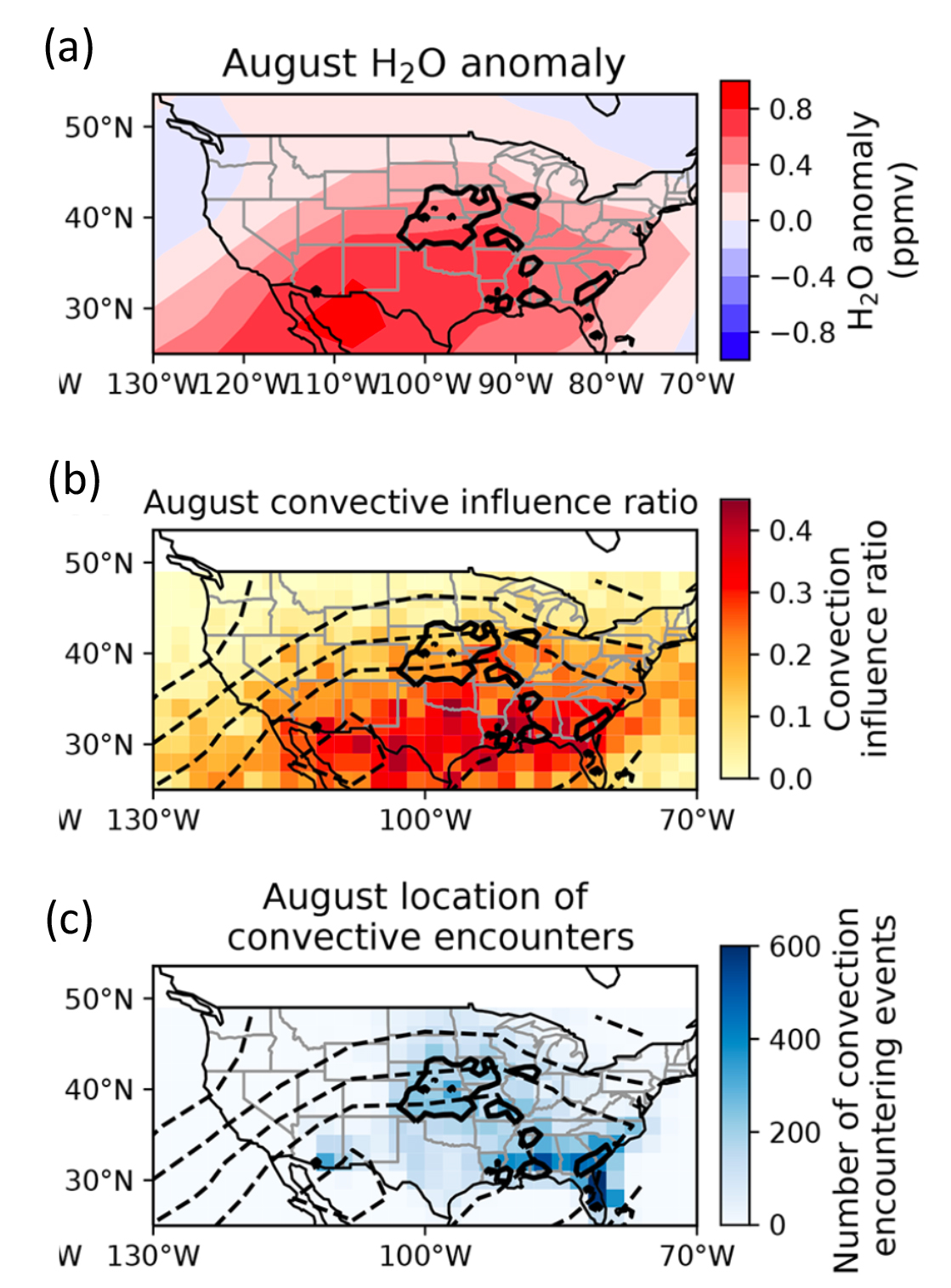 (a) MLS H2O anomaly in August . Contours indicate areas of frequent high convection. (b) Fraction of MLS profiles influenced by convection in the previous 5 days. (c) Locations of most frequent convection encounters.

(a) Geographical distribution of MLS 100-hPa water vapor anomaly (after removal of the zonal mean), averaged over 2005–2016 in August. Thick black lines illustrate the 10−5 contours of GridRad convective occurrence, averaged over August. (b) Geographical distribution of the convection influence ratio over North America during August. The convection influence ratio is the fraction of MLS observations in each grid box that encountered deep convection during the previous 5 days. (c) Locations where convectively influenced parcels associated with individual MLS profiles sampled in August encounter convection over 2005–2016.

Daily near-global observations of upper tropospheric and lower stratospheric water vapor from the Aura Microwave Limb Sounder provide a reliable 16-year data record to facilitate similar studies. While the planned Swedish SIW mission is expected to provide comparable measurements, there is currently no NASA sensor planned to continue such observations.

Water vapor profiles from the Aura Microwave Limb Sounder are available from https://mls.jpl.nasa.gov/products/h2o_product.php. National NEXRAD WSR-88D radar data are archived by the GridRad dataset, which can be found at http://gridrad.org/data.html. Winds, temperatures, and heating rates are provided by the ECMWF Reanalysis-Interim (ERA-interim) at https://www.ecmwf.int/en/forecasts/datasets/.