Convective processes play a major role in controlling the abundances of cloud ice and water vapor in the tropical tropopause layer, which in turn strongly modulate climate. Despite their importance, these processes remain poorly represented in global climate models. Observations of the full diurnal cycle of cloud ice, closely linked to that of convection, are needed for model evaluation and refinement.

In previous work [Dion et al., ACP, 2019], the authors developed a simple model combining twice-daily measurements of ice water content (IWC) by the Aura Microwave Limb Sounder (MLS) with higher temporal resolution measurements of precipitation from the Tropical Rainfall Measuring Mission (TRMM) – a proxy for convection – to reconstruct the diurnal variation of ice. The amount of ice injected into the upper troposphere (146 hPa) and tropopause level (100 hPa) by deep convection (∆IWC) is estimated from the amplitude of the IWC diurnal cycle. Here ∆IWC is also estimated using MLS IWC and a different proxy for convection: the number of lightning events from the TRMM Lightning Imaging Sensor (Flash). IWC from the ERA5 meteorological reanalyses is also used. Applying the model to the Maritime Continent, they found that ∆IWCPrec, ∆IWCFlash, and ∆IWCERA5 are fairly consistent over land but differ over offshore and coastal areas. At both levels, ∆IWC estimated over land (where convection is stronger) can be more than twice that estimated over ocean, and the largest ∆IWC is found over small islands with high topography (e.g., Java). 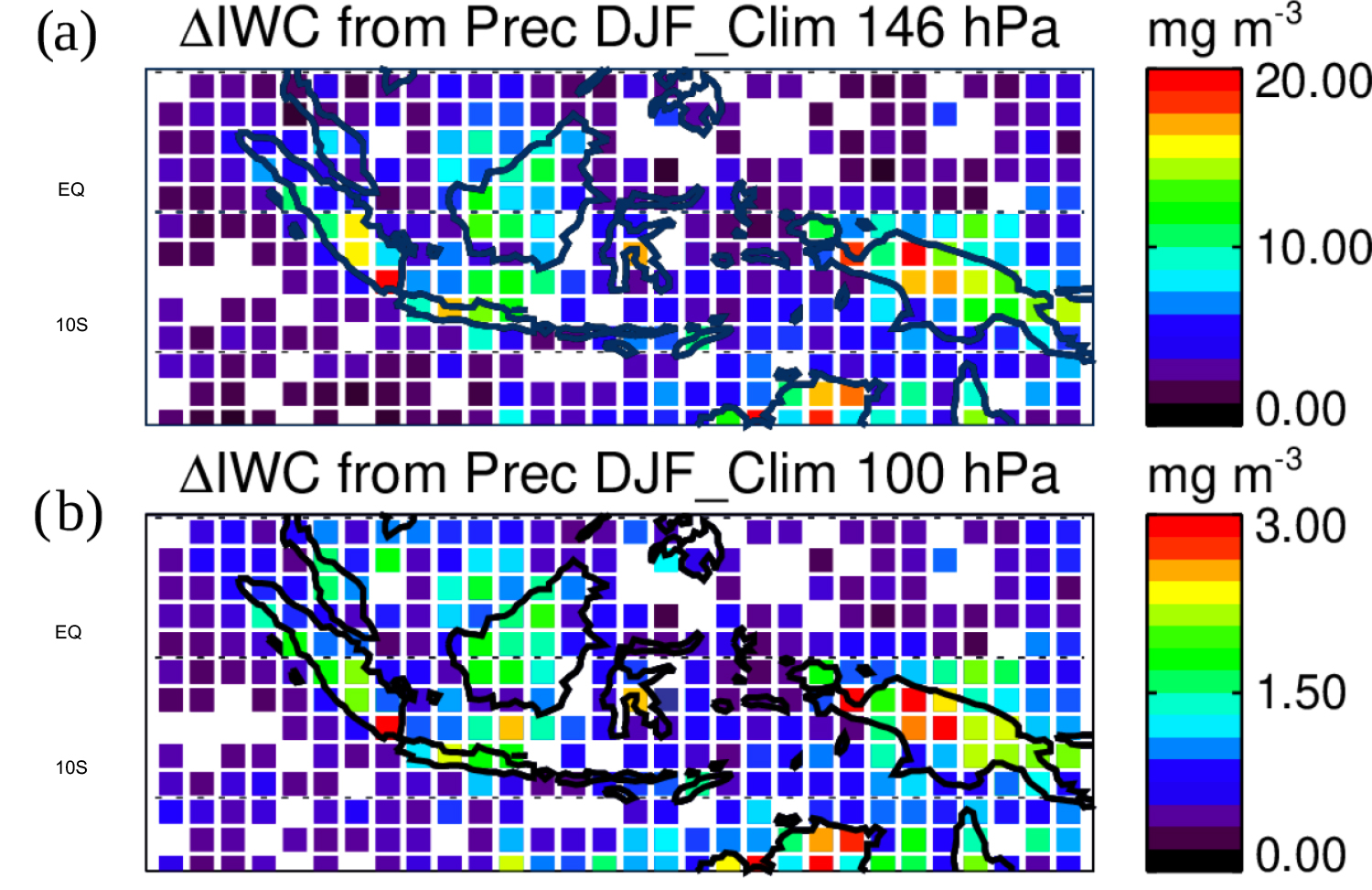 Climatological (2004–2017) estimates of the amount of ice injected in the upper troposphere (146 hPa, top) and tropopause level (100 hPa, bottom) by deep convection (∆IWC) over the Maritime Continent during the austral convective season (December-January-February, DJF) based on Aura MLS IWC and TRMM precipitation measurements are typically substantially higher over land than over coasts or ocean.

This work provides a more complete view of the diurnal variation of cloud ice in the tropopause region and hence the contribution from injection by deep convection than previously available, allowing small-scale convective processes affecting cloud ice to be investigated separately over islands and seas in the Maritime Continent, where ∆IWC values are largest.

Figure 4 of above reference. Daily amount of ice injected by deep convection (∆IWC) into (a) the upper troposphere (146 hPa) and (b) the tropopause level (100 hPa) over the Maritime Continent, averaged during the austral convective season of December-January-February (DJF) for the period 2004–2017. Dion et al. [ACP, doi:10.5194/acp-19-6459-2019, 2019] showed that precipitation (Prec) from TRMM is a good proxy for deep convection reaching the UT and TL during the growing stage of convection. The diurnal cycle of IWC is reconstructed by correlating TRMM Prec (binned at 1 h resolution over the diurnal cycle) with the twice-daily MLS IWC measurements; ∆IWC is then estimated from the difference between the maximum and the minimum in the calculated diurnal cycle of IWC.

Although clouds and water vapor in the tropical tropopause layer (TTL) play central roles in Earth’s climate system, the mechanisms controlling them are still not fully understood. Many climate models fail to accurately reproduce the diurnal cycles of clouds and precipitation, which are closely coupled to the diurnal cycle in convection. Lack of measurements of IWC over its full diurnal cycle hampers efforts to evaluate climate model performance and guide refinements to improve the reliability of projections. The simple model developed by these authors exploits the long records from MLS, TRMM, and LIS to provide a much more detailed view of the diurnal variation of ice in the TTL than achievable with the twice-daily MLS measurements alone. The 13-year DJF climatology of ∆IWC (2°×2° horizontal resolution) in six tropical convective zones that they previously derived [Dion et al., 2019] identified the Maritime Continent (the region including the Indonesian islands) as producing the largest values of ∆IWC. Here they extend that analysis to quantify the climatological amount and duration of ice injected over five islands (Sumatra, Borneo, Java, Sulawesi, and New Guinea) and five seas (West Sumatra Sea, Java Sea, China Sea, North Australia Sea, and Bismarck Sea) of the Maritime Continent and assess the processes affecting ∆IWC in these different study zones. The results of this study underscore the value of the continued long-term record of IWC from MLS and the need for new measurements that directly resolve the diurnal cycle of IWC in the TTL, which may be included as an aspect of ACCP currently under development.