Spatial and Temporal Variability in the Hydroxyl Radical 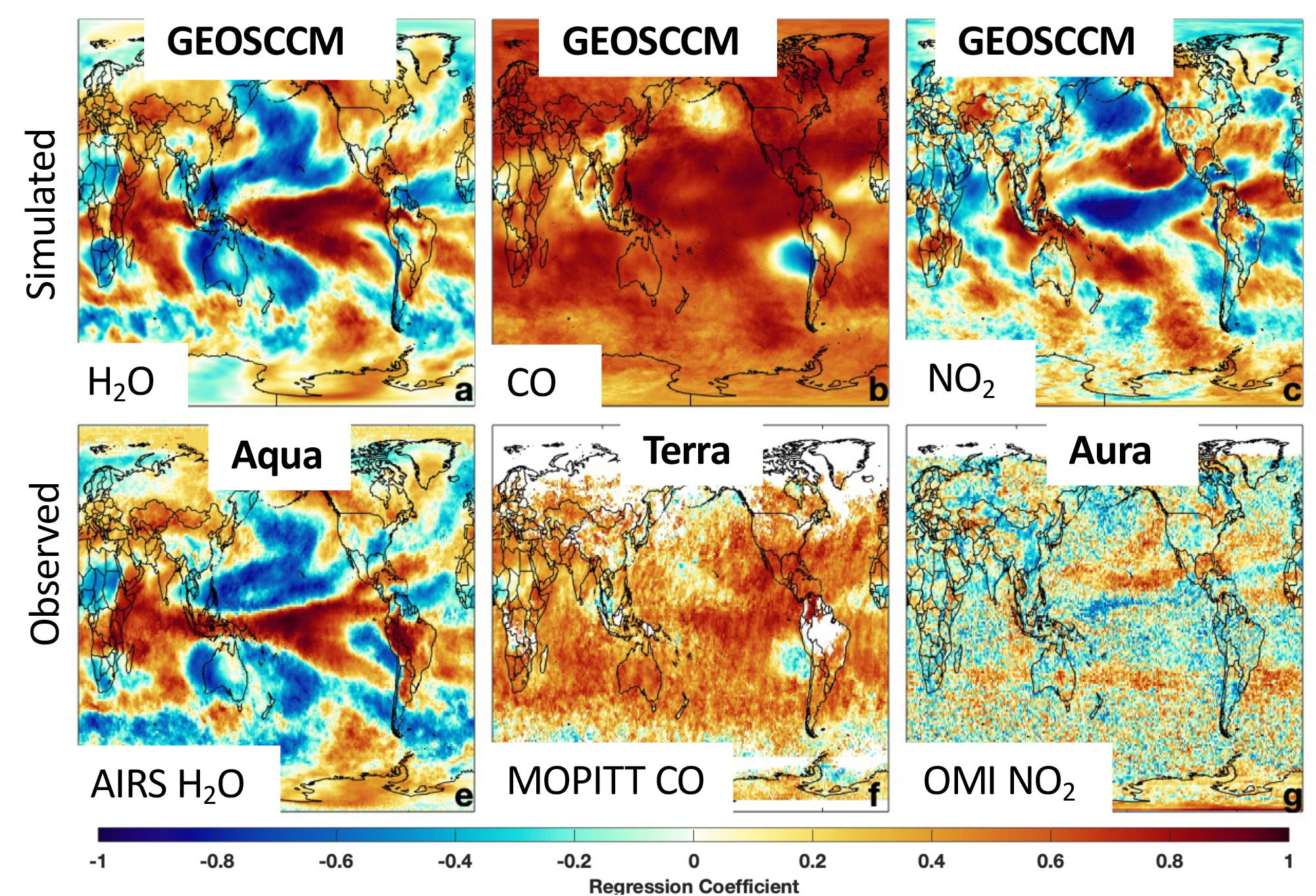 Figure : Spatial and temporal variability in the hydroxyl radical: understanding the role of large-scale climate features and the influence on OH through its dynamical andphoto chemical drivers.

The regression coefficient of tropospheric column H2O (left), CO (middle), and NO2 (right) averaged over December – February against the Multivariate ENSO Index (MEI) is shown for the GEOSCCM simulation (top) and for the AIRS, MOPITT, and OMI (bottom) satellite retrievals, respectively. Correlations were performed over the lifetime of the satellites, as outlined above.

Tropospheric OH is the dominant sink of CH4, the second-most important anthropogenic greenhouse gas. Understanding spatial and temporal variability of OH is therefore necessary to understand recent trends in methane, whose atmospheric abundance can be controlled both by changes in emissions and changes in sinks. Observations of OH are sparse, however, as it is low in abundance and short-lived. OH has traditionally been constrained on a global and hemispheric basis by observations of methyl chloroform (MCF). Because of recent declines in MCF concentration, which is now at or below instrumental detection limits, alternative constraints on OH are necessary.

Here, based on analysis of the GEOSCCM model, we show that the El Niño Southern Oscillation is the dominant mode of OH variability across all seasons and that satellite retrievals are capable of capturing the ENSO-related variability of OH drivers, including CO, H2O , and NO2. These results provide new constraints on the atmospheric oxidative capacity and interannual variability of OH, necessary for understanding the chemistry of a myriad of species. This work also provides the path forward for a potential new way to constrain OH, and thus the methane lifetime, from space using the approximately 20 years of data from EOS satellites. Because most of the species necessary to constrain OH will also be retrieved from recent and upcoming geostationary satellites (e.g., GEMS and TEMPO), the results here could potentially provide a novel use for these missions.

Anderson et al. (2021). Spatial and temporal variability in the hydroxyl radical: understanding the role of large-scale climate features and their influence on OH through its dynamical and photochemical drivers. Atmospheric Chemistry and Physics, 21, 6481-6508. https://doi.org/10.5194/acp-21-6481-2021.