Observing the Climate Impact of Large Wildfires on Stratospheric Temperature

Wildfires are expected to become more frequent and intense in the future. They not only pose a serious threat to humans and ecosystems, but also affect Earth’s atmosphere. Wildfire plumes can reach into the stratosphere, but little is known about their climate impact.

Here, the authors reveal observational evidence that major wildfires can have a severe impact on the atmospheric temperature structure and short-term climate in the stratosphere.

This is stronger than any signal from recent volcanic eruptions. Such extreme events affect atmospheric composition and climate trends, underpinning their importance for future climate. 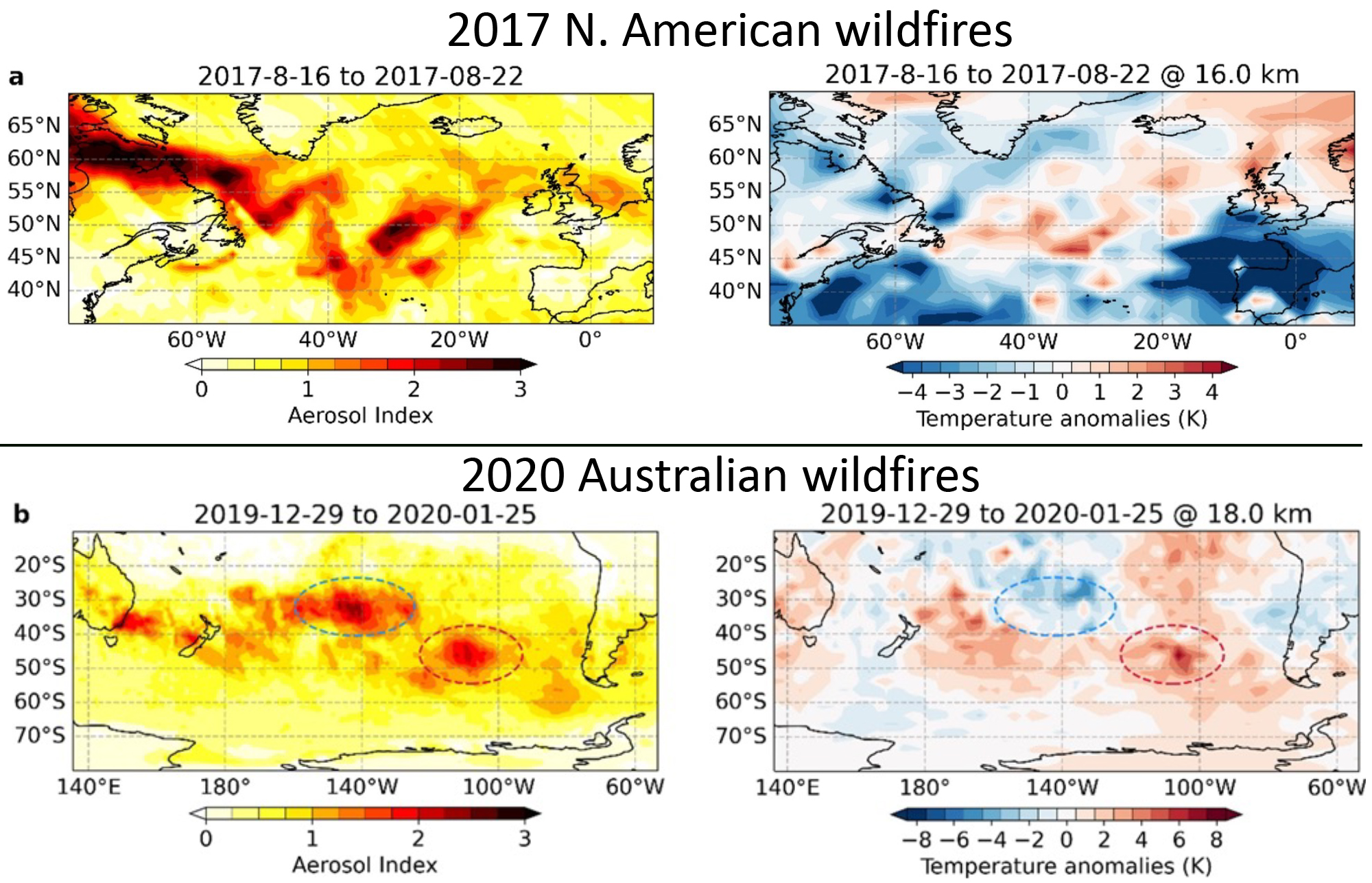 Regional temperature anomalies shortly after the wildfire events. (a) Mean OMI aerosol index (AI) and radio occultation (RO) temperature anomalies in the lower stratosphere (16 km) in the Northern Atlantic region for the week from August 16 to August 22, 2017. (b) Same as (a) but for the Southern Pacific region and at an altitude of 18 km for the weeks from December 29, 2019 to January 25, 2020. Note the different temperature ranges in (a) and (b).

The results indicate that the imprint from the Australian wildfires is the strongest stratospheric climate signal caused by aerosols since the eruption of the Pinatubo in 1991. While volcanic eruptions occur on an irregular basis and are not influenced by human action, the risk of intense wildfires increases due to climate change. Therefore, the impact of wildfires is expected to become increasingly important. This study clearly reveals a severe impact of large wildfires on stratospheric temperatures, similar as or even larger than volcanic eruptions. This has further implications for stratospheric chemistry, e.g., destruction of stratospheric ozone through the direct impact of aerosols, or through the acceleration of chemical reactions due to a warmer stratosphere.

The temperature signature of wildfires, similar to volcanic eruptions, impacts stratospheric climate variability and affects climate trends. As soon as aerosols reach the stratosphere, they can stay there for years and accumulate, influencing the upper-air climate. This implies that such extreme events will become increasingly important for future climate.

The synergy and utility of A-Train observations with other Earth datasets is highlighted with study.