The hydroxyl radical (OH) is the primary cleansing agent in the atmosphere. The abundance of OH in cities initiates the removal of local pollutants; therefore, it serves as the key species describing the urban chemical environment.

A machine learning (ML) approach is proposed an efficient alternative to OH simulation using a computationally expensive chemical transport model. The ML model is trained on the parameters simulated from the WRF-Chem model, and it suggests that six predictive parameters are capable of explaining 76% of the OH variability. The parameters are the tropospheric nitrogen dioxide NO2 column, the tropospheric formaldehyde (HCHO) column, photolysis of ozone (J(O1D)), water (H2O), temperature, and pressure. Then by using observations of the tropospheric NO2 column and HCHO column from the Aura Ozone Monitoring Instrument (OMI) as input to the ML model to enable measurement-based prediction of daily near surface OH at 1:30 pm local time across 49 North American cities from 2005 to 2014.

The result is validated by comparing the OH predictions to measurements of isoprene, which has a source that is uncorrelated with OH and is removed rapidly and almost exclusively by OH. They demonstrate that the predicted OH is, as expected, anticorrelated with isoprene. They also show that this ML model is consistent with understanding of OH chemistry given the solely data-driven nature. 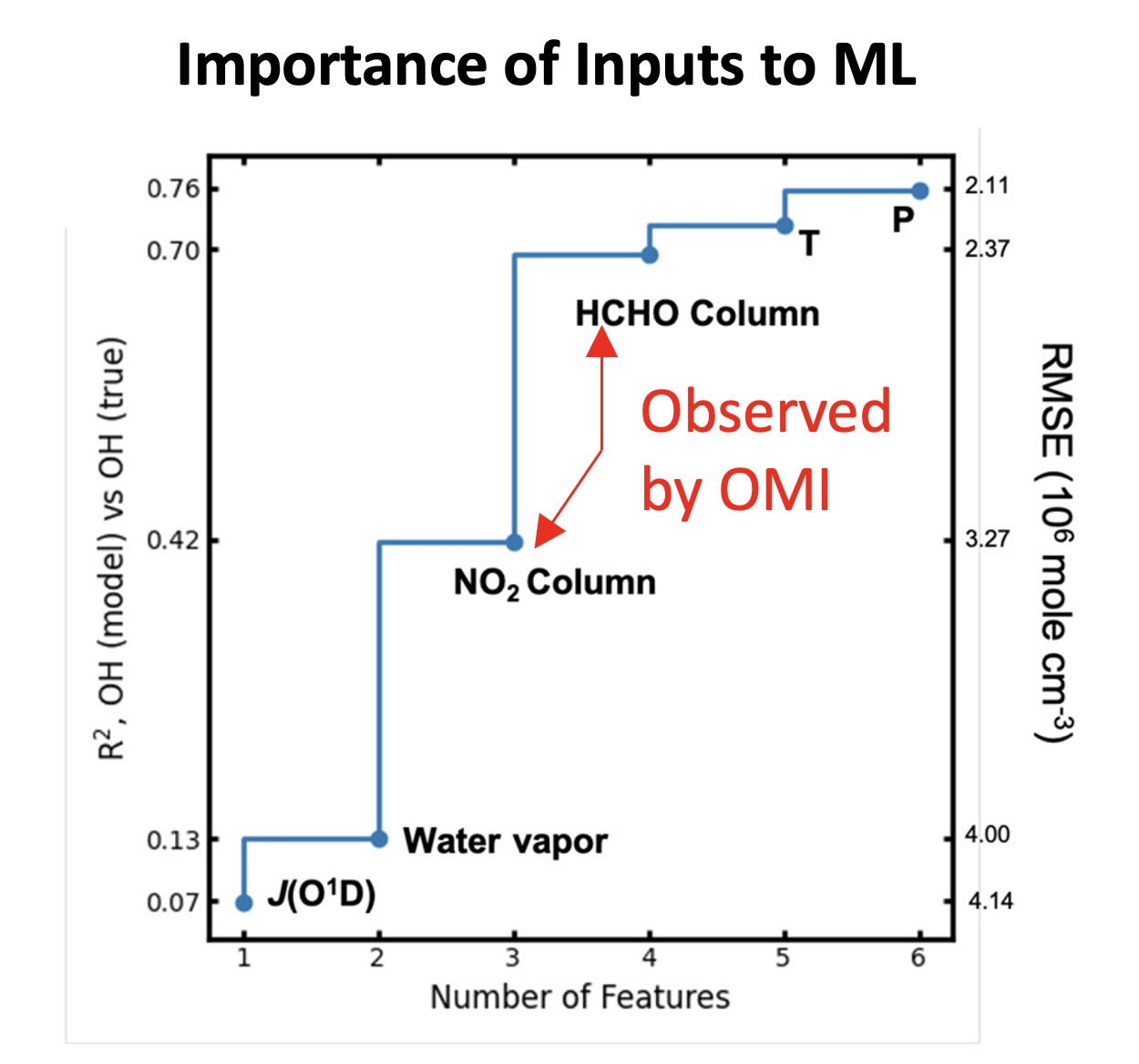 Figure A: First investigation of the effect of individual features on the model performance. The model is benchmarked by adding the features iteratively. The figure is a demonstration of the effectiveness of selected features. Two column variables, the NO2 column and the HCHO column, provide the most important constraints on the OH abundance.

Zhu et al. conclude that their current ML model is capable of explaining 76% of the simulated OH variability from WRF-Chem. Therefore, there may be the potential to better constrained urban OH with future, improved satellite observations.

For the tropospheric NO2 column, they use version 3.0B of the Berkeley High Resolution (BEHR) OMI NO2 product. It builds upon the NASA standard product v3.0; the major changes are the calculation of tropospheric AMFs using high-resolution a priori input data for surface reflectance, surface elevation, and NO2 vertical profiles. The daily NO2 profiles are simulated from WRF-Chem. They use tropospheric HCHO column densities from the Quality Assurance For Essential Climate Variables (QA4ECV) project (www.qa4ecv.eu). HCHO profiles from the TM5 model on a 1° × 1° latitude–longitude grid are used a priori in AMF calculations.