The eruption of the Hunga Tonga – Hunga Ha’apai (HT-HH) underwater volcano on 15 January 2022 sent a volcanic plume into the middle atmosphere to altitudes of up to 57 km, triggered tsunami alerts across the world, and generated ionospheric disturbances.

Measurements from the Aura Microwave Limb Sounder (MLS) revealed that the eruption injected water vapor, SO2, and HCl into the stratosphere.

In comparison with previous eruptions, the amounts of SO2 and HCl injected were unexceptional, although the plume reached higher altitudes.

In contrast, the water vapor injection was unprecedented in both magnitude (far exceeding any previous values in the satellite era) and altitude (penetrating into the mesosphere, above 50 km).

Trajectories and radiance simulation studies confirm that the water vapor, SO2, and HCl enhancements arose from direct injection by the eruption.

Unlike previous strong eruptions in the satellite era, HT-HH could impact climate not through surface cooling due to sulfate aerosols, but rather through surface warming due to the radiative forcing from the excess stratospheric water vapor. 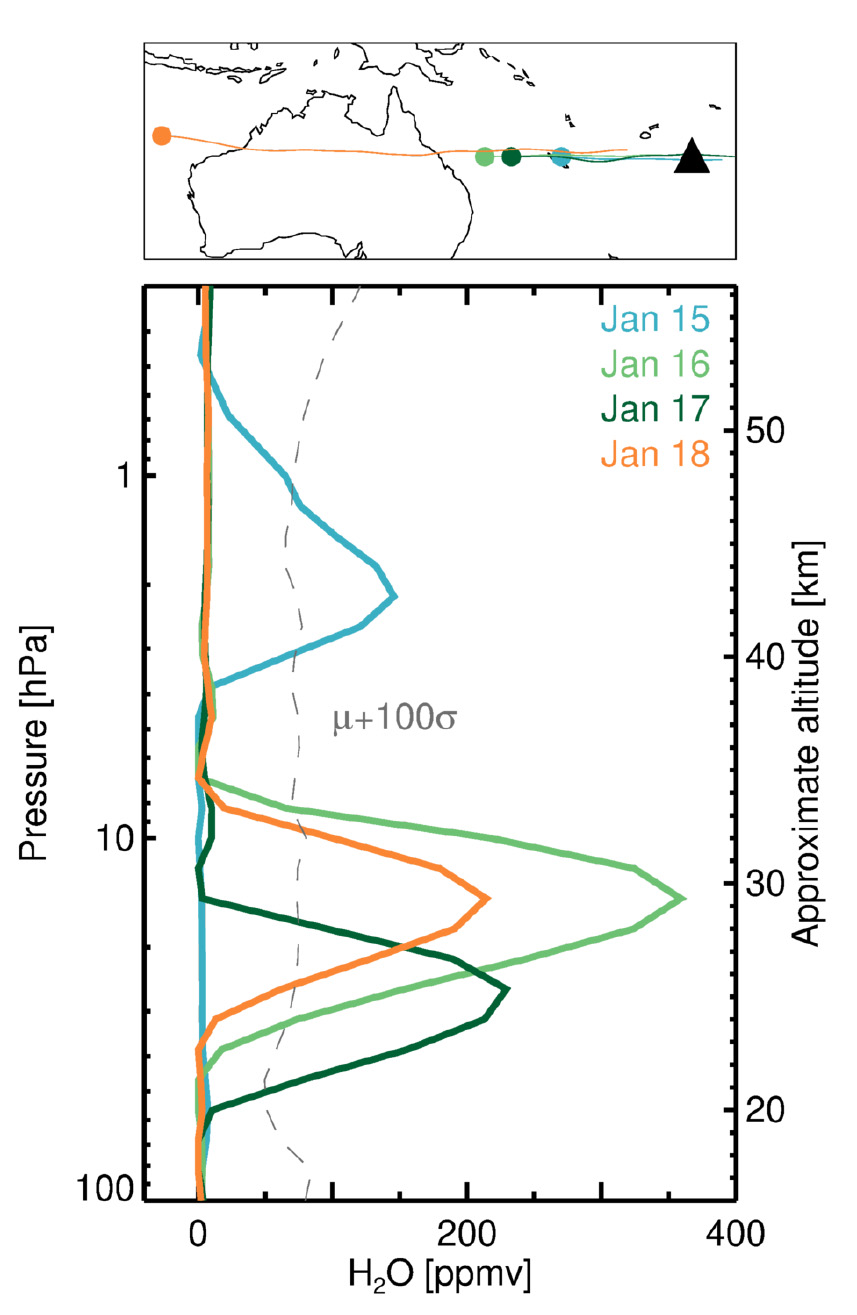 (Top) Locations of maximum H2O measured by MLS on 15, 16, 17, and 18 January 2022. Lines display back trajectories from these measurements to the eruption time. The triangle marks the volcano location. (Bottom) H2O profiles associated with the locations shown on the map.

Adapted from Figure 1 of above reference. (Top) Locations of the profiles measured by MLS displaying the largest mixing ratios on 15, 16, 17, and 18 January 2022. Lines display back trajectories from these measurements to the eruption time. The trajectories indicate that these enhancements lie downwind from the HT-HH volcano, marked by a triangle. (Bottom) H2O profiles associated with the locations shown on the map. The gray line shows the 2005–2021 January-February-March mean plus 100 times the standard deviation (μ + 100σ).

Given the potential high-impact consequences of the HT-HH water vapor injection, it is critical to continue monitoring volcanic gases from this eruption and future ones to better quantify their varying roles in climate. MLS is the only sensor providing daily near-global profiles of humidity from the upper troposphere to the mesosphere. The sole confirmed future sensor, ALTIUS (ESA), will measure water vapor only in solar occultation, giving only ∼monthly global coverage.