The Peruvian copper smelters are among the world's largest industrial point sources of sulfur dioxide (SO2). 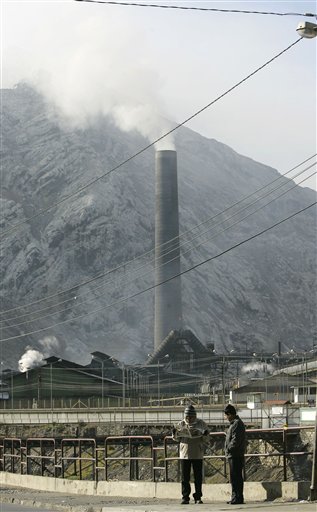 A processing plant that separates copper from copper ore is called a smelter. Copper smelters emit a lot of SO2 because copper ore is made of copper sulfide. The smelters in Peru are among the most polluting in the world.

OMI is sensitive enough to be able to identify the copper being emitted from the La Oroya and Ilo smelters even though these produce less SO2 than the volcanoes (notice that the vertical scales are different). In addition to air quality applications, these data provide insights into the different lifetimes, dispersal etc of volcanic vs. industrial emission plumes.

The SO2 plume from the volcanoes extends into the Pacific because the SO2 is released at a higher altitude where it has a longer atmospheric lifetime.