In "Thriving on Our Changing Planet: A Decadal Strategy for Earth Observation from Space”, Aura data were presented as examples of satellite observations used as a global monitoring system for air quality & health and stratospheric ozone.

Over the last decade the use of satellite measurements of air pollutants for scientific research, health and air quality applications has grown because of improved data quality resulting from retrieval algorithm development. These improved data sets now have the necessary quality to demonstrate the efficacy of environmental legislation, inform the development of mitigation strategies, and constrain emission fluxes and concentrations of some important air pollutants, such as criteria pollutants, nitrogen dioxide, and sulfur dioxide. Ongoing retrieval algorithm development is not only improving existing data sets of other pollutants but also allowing for new data sets to be developed, such as for ammonia, an air toxin.


Monitoring and Understanding of Stratospheric Ozone 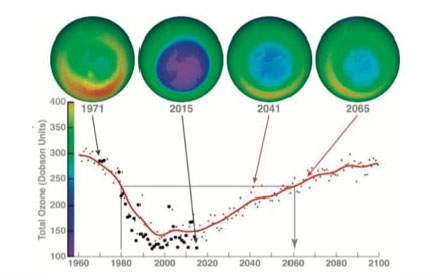 Satellite observations of atmospheric ozone began in 1979 with the Total Ozone Mapping Spectrometer (TOMS). Observations over the past decade from the Ozone Monitoring Instrument (OMI), the Microwave Limb Sounder (MLS) and the Tropospheric Emission Spectrometer (TES) aboard NASA Aura have sustained the long-term satellite record and provided further insights into the vertical distributions of ozone. The satellite record has been critical for understanding the complex interplay between dynamic, physical, and chemical processes driving the formation of the Antarctic ozone hole. Satellite observations have enabled the monitoring of interannual variability and potential ozone depletion in the Arctic, and provided understanding of the differences between the Arctic and the Antarctic. The satellite record has also enabled tracking of ozone trends at northern midlatitudes with sufficient information to relate these trends to their causes. 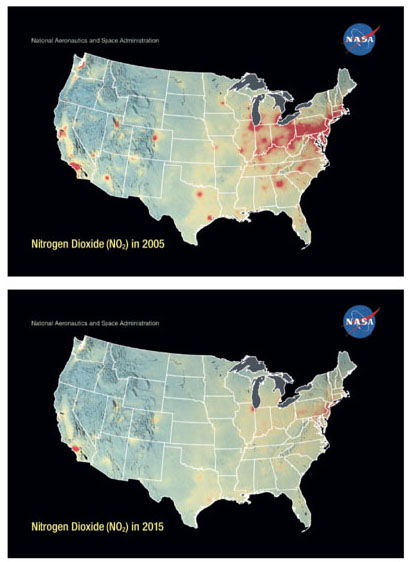 Starting in 2003, the U.S. Environmental Protection Agency (EPA) has acted to vigorously control fuel combustion emissions of nitrogen oxide radicals (NOx = NO + NO2) through the NOx Budget Trading Program and other measures. NOx is a major source of ozone pollution, particulate pollution, acid deposition, and ecosystem eutrophication.

Ozone Monitoring Instrument (OMI) observations of NO2 aboard the Aura satellite have provided a vivid demonstration of the success of these emission control policies. This figure shows the trends of the decreasing U.S. air pollution over the past decade. The figure shows annual mean tropospheric columns of nitrogen dioxide (NO2) observed by the Ozone Monitoring Instrument (OMI) satellite instrument in 2005 and 2015.

Aura data in the 2018 National Academies’ Decadal Survey demonstrates the power of satellite data for science and societal benefit. Examples were presented of Aura satellite observations used as a global monitoring system for air quality & health and stratospheric ozone. In a future decadal survey, other satellite missions, such as TROPOMI and TEMPO, will provide improved satellite observations for health studies beneficial to societal concerns.