Aura's High Resolution Dynamics Limb Sounder (HIRDLS) reveals the global pattern of the double tropopause using the HIRDLS high vertical resolution profiles. Composition and structure near the tropopause are important for the Earth radiative balance and quantifying transport of ozone and other stratospheric species into the troposphere. 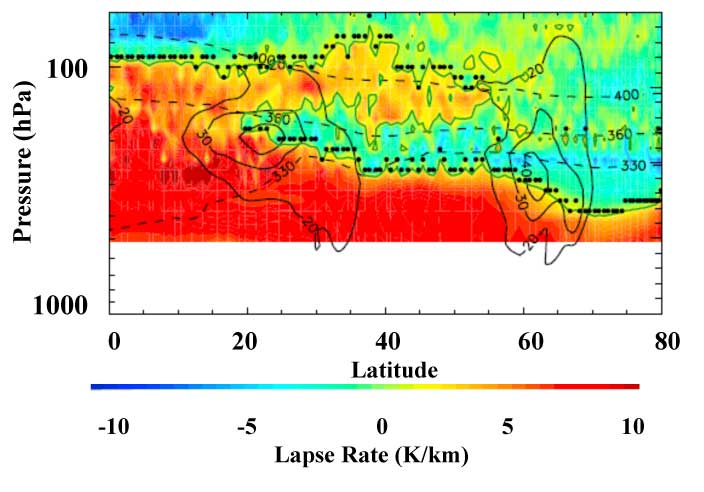 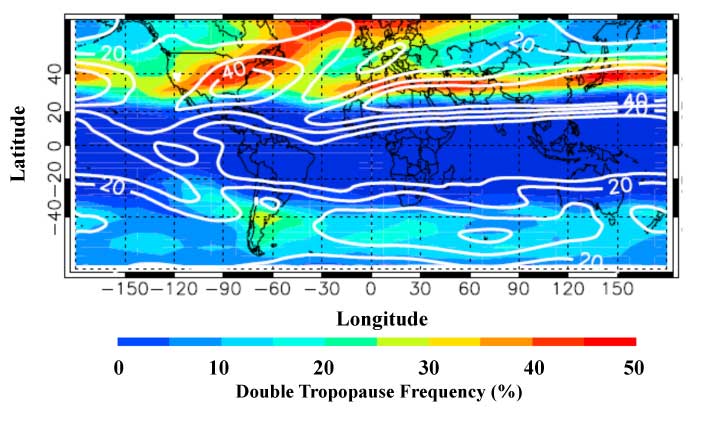 Figure 2: Double tropopause frequency of occurrence is obtained from HIRDLS Level 2 data 2005 - 2007 for December-January-February. In each 3o latitude by 15o longitude bin the frequency is the percentage of profiles with a double tropopause. White contours are the mean zonal wind (solid white lines), on the 200 hPa pressure surface.

Significance: The double tropopause is a thermal structure in the atmosphere that has been connected, using radiosonde and aircraft data, to the transport of tropical upper tropospheric air into the lowermost stratosphere and visa versa. Three full years of HIRDLS data, 2005-2007, has shown global characteristics of the double tropopause, such as that they preferentially form along the subtropical jet, especially from the Pacific Ocean, across the US, to the Atlantic Ocean. These results highlight subtle variations in double tropopause frequency previously not seen, suggesting that irreversible mixing could be more common over the western half of the globe.

Relevance for future science: The high vertical and along-track resolution of Aura HIRDLS has shown new distributions of a fine-scale feature of the atmosphere called the double tropopause that is important for quantifying the current and future composition of the upper tropopause lower stratosphere (UTLS) region, a region of the atmosphere that is important for the radiative balance of the Earth and the transport of ozone into the troposphere from the stratosphere.

Other products in HIRDLS version 6, recently available, such as CFC's also have the potential to contribute to a greater understanding of air mass exchange and mixing in the UTLS due to the extension in the 'useful' vertical range. Therefore future science still has much to gain from the analysis of the HIRDLS data products.