Due to multiple volcanic eruptions in 2008-10, stratospheric sulfate aerosol concentrations are elevated compared to recent years, with possible impacts on atmospheric chemistry and radiation.

Gaseous and aerosol clouds from major explosive eruption of Indonesia's Merapi volcano on November 4-5, 2010 were measured by multiple A-train sensors: 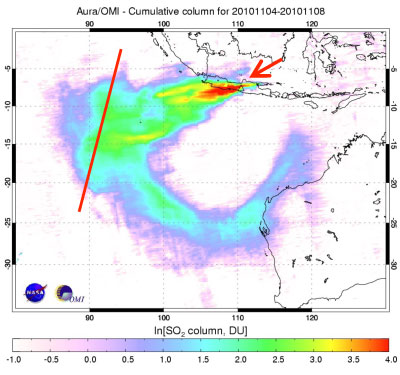 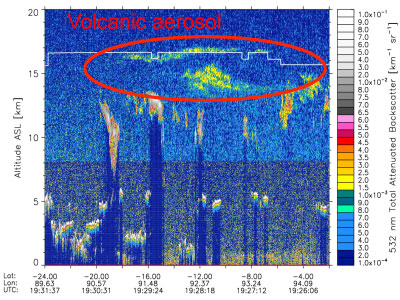 If a volcano injects a sufficient quantity of sulfur dioxide into the stratosphere, the resulting chemical reactions can create reflective and chemically reactive aerosols that linger for months or even years, cooling climate by reflecting sunlight. At just 7.5 degrees south of the equator, Mount Merapi is positioned to have such an impact. But in November 2010, Merapi had cumulatively emitted just 1 percent of what was released by Mount Pinatubo in 1991. [Get more information]

Technical Description of Image:
Figure 1: The image shows cumulative burdens of volcanic sulfur dioxide (SO2) gas emitted by explosive eruption of Indonesia's Merapi volcano on November 4-8, 2010, as observed by the Dutch/Finnish Ozone Monitoring Instrument (OMI) on NASA's Aura spacecraft. Sulfur dioxide is measured here in Dobson Units: The greatest concentrations appear in red; the lowest in lavender. Typically used to measure ozone, the Dobson Unit is the number of molecules of gas that would be required to create a layer 0.01 millimeters thick at a temperature of 0 degrees Celsius and a pressure of 1 atmosphere (the air pressure at the surface of the Earth). Insert: Molten lava flows from the crater of Mount Merapi captured in long exposure photograph taken from Klaten district in Central Java province late on November 2, 2010. (SONNY TUMBELAKA/AFP/Getty Images) Assessed on January 8 2010: [Go to feature] Figure 2: NASA's CALIPSO satellite carries a pulsating laser (lidar) that sends short pulses of light through the atmosphere. Some of the light bounces off clouds and particles in the atmosphere and returns to the satellite. The CALIPSO "curtain plot" shows a vertical profile of a slice of the atmosphere indicated with red line in Figure 1, revealing that the volcanic aerosol layer was above 15 kilometers. The strength of the returning signal (attenuated backscatter shown in the color bar on the right) provides information about the characteristics of the clouds or aerosols (particles).

Relevance for future science and relationship to Decadal Survey: :
Aura OMI will continue monitoring volcanic and anthropogenic SO2 from space to detect trends in volcanic and anthropogenic aerosol precursors and will provide overlap with ESA Sentinel-5 precursor mission (TropOMI) planned to launch in 2014. NASA/NOAA Ozone Monitoring and Profiling Suite (OMPS) instrument is slated for the NPP launch in 2011 and subsequent JPSS satellites. OMPS will continue the total ozone and SO2 observational record. Decadal Survey recommended the Geostationary Coastal and Air Pollution Events (GEO-CAPE) mission is planned to launch after 2020. It will allow more frequent monitoring of volcanic and anthropogenic SO2 pollution over North and South America.

This work shows the importance of solar-related processes in the observed variation of the atmosphere. It will be important to carry out further measurements of HOx and NOx constituents in order to understand the variations in ozone. Thus, measurements of the proposed Decadal Survey's Global Atmospheric Composition Mission (GACM) are necessary to continue the work on the influence of solar protons on the mesosphere and stratosphere.