Satellite Measurements of Aerosols Above Clouds

Aerosols are tiny particles, such as smoke, soil dust, and sea salt, suspended in the atmosphere. They scatter and absorb solar radiation and play an important role in the energy balance of the earth-atmosphere system. Carbonaceous particles produced by biomass burning and boreal forest fires, and desert dust particulates originating in arid and semi-arid regions are the most predominant absorbing aerosol types, and lead to atmospheric heating. A large fraction of the atmospheric aerosol load reaches the free troposphere and is frequently located above clouds.

A variety of well established space and ground based techniques are used to measure the amount (i.e., optical depth) of suspended particle matter under cloud-free conditions. Aerosol above clouds, however, can only be measured from airborne or satellite-based instrumentation.

We have developed a method to measure the optical depth of absorbing smoke and dust aerosols located above clouds using satellite observations of upwelling radiation at two wavelengths in the near-UV spectral range (330-390 nm). The technique takes advantage of the particle's large absorption capacity of cloud reflected radiation to detect and quantify particulate matter above clouds. 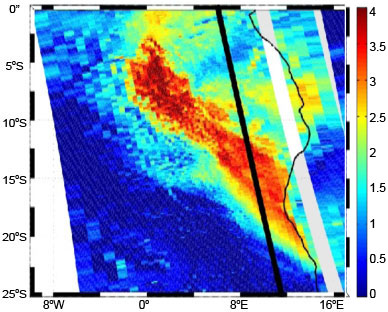 An absorbing aerosol layer as seen from space by two satellite sensors on August 4, 2007 over the South Atlantic Ocean off the coasts of Angola and Namibia : Aqua-MODIS visible image of an extended low level cloud (left); Aura-OMI detection of a smoke layer above clouds in terms of the UV aerosol index, a measure of aerosol scattering/absorption (right).

The new satellite-based measuring technique will facilitate the study of several aspects of aerosol-cloud interaction and the accurate quantification of the direct radiative forcing effects of absorbing aerosols above clouds. 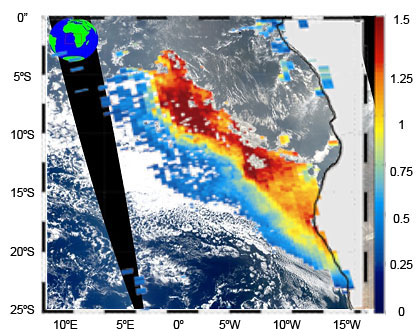 Unlike aerosols above over dark backgrounds, whose scattering effects exert a net cooling effect on the upwelling radiation at the top of the atmosphere, carbonaceous and dust aerosols above clouds absorb a fraction of the radiation reflected by the cloud and can, thus, produce a net warming effect of the atmospheric column. The magnitude of the resulting warming depends on the aerosol optical depth and it absorption capacity (or single scattering albedo) and the spatial coverage (cloud fraction) of the underlying cloud. The measuring technique developed here provides a very important remote sensing tool to accurately quantify the atmospheric aerosol load above clouds. The improved AOD estimates will allow a better characterization of the direct radiative forcing of above-cloud-aerosols, and a better understanding of other aspects of aerosol-cloud interaction.

Relevance for future science and relationship to Decadal Survey:
Satellite remote sensing of aerosols and clouds combining near IR, visible and near UV observations offer a great potential for the study of aerosol-cloud interaction. The near-UV aerosol sensing capability was developed based on TOMS observations and is currently applied to OMI measurements. The NPP-OMPS sensor and the planned DS Geo-CAPE mission will continue the long-term record of near-UV aerosol observations.

Data Source: Aura satellite Ozone Monitoring Instrument (OMI) spectral radiances data.
Figure 1: : The presence of a horizontally extended cloud off the coasts of Angola and Namibia as seen by MODIS is shown on the left. The cloud is about 0.5 km thick and lies between 1.0 and 1.5 km above sea level as indicated by CALIPSO-lidar observations (not shown). The darkening effect associated with aerosol absorption can be observed over the northernmost region of the cloud. The right panel shows the unambiguous presence of an absorbing aerosol seen by the OMI absorbing aerosol index (AAI). According to CALIPSO observations the aerosol layer resides at about 1 km above the cloud. Figure 2: : Retrieved 388 nm aerosol optical depth (AOD) of the aerosol layer in Figure 1. The AOD is obtained via an inversion algorithm that makes use of radiative transfer calculations at 354 and 388 nm. Observed values of the AAI and 388 nm reflectance are fed to an inversion scheme that simultaneously derives the optical depths of both the absorbing aerosol layer and the underlying cloud. Assumptions of aerosol type and aerosol-cloud separation are required.